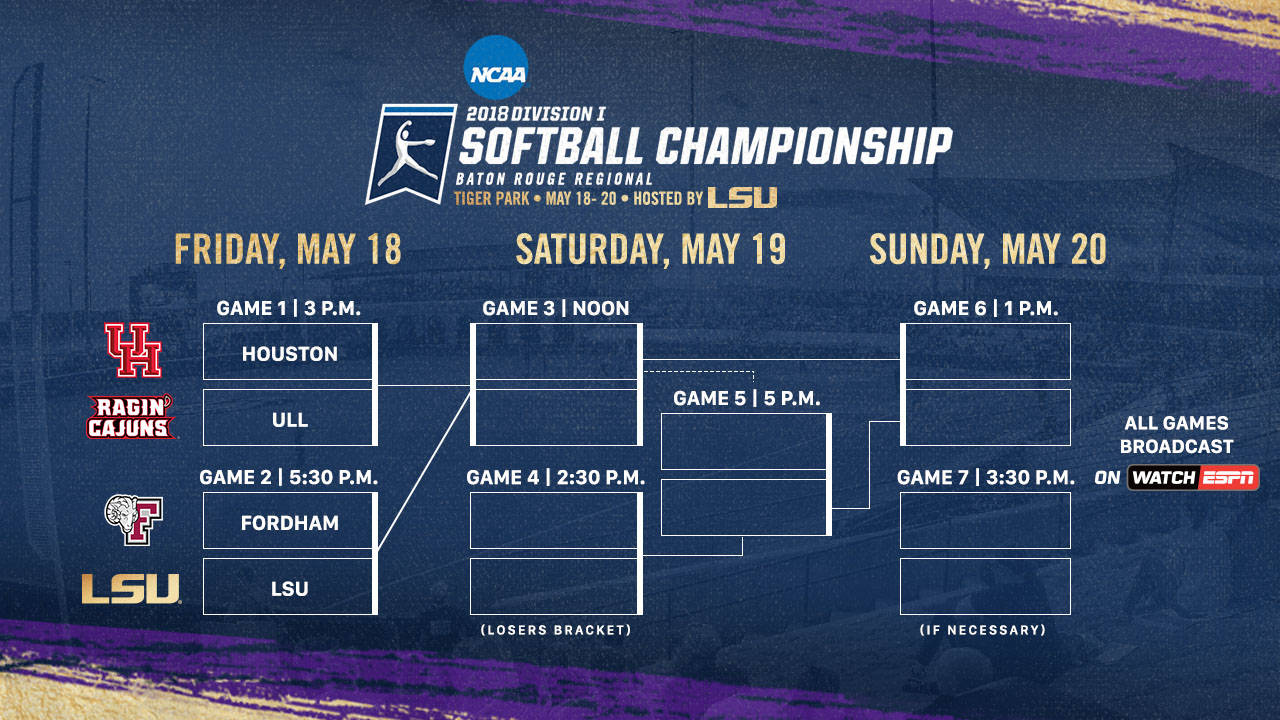 LSU, the No. 11 overall national seed in this year’s tournament will host its fourth consecutive regional beginning Friday, also welcoming UL-Lafayette and Houston. Those two teams will open the regional in the first game of the day on Friday at 3 p.m.

All games throughout the regional will be available to stream live on ESPN3, which can be found through WatchESPN and the WatchESPN app. Lyn Rollins and Yvette Girouard will be on the call for every game of the weekend, cover the team’s run throughout the tournament.

For all information for the regional this weekend, click here. The site features links to video stream, live stats and any updates from Tiger Park. The site will also feature a link to free live audio coverage of LSU games at www.LSUsports.net/live with Patrick Wright calling the action locally in Baton Rouge on Talk 107.3 FM. For fans looking to purchase tickets, click here.

Torina’s Thoughts
“We need to keep playing softball the same way we have. We’ve been playing good softball the last four to five weeks. Our student-athletes understand how to win this time of year. Our players have been tested all year and have played in big moments. We are excited to be in front of our fans this weekend as we have the best fans in the country.”

About the Tigers
The Tigers go into the NCAA Tournament with a 41-14 overall record. LSU finished the regular season with a sweep of Arkansas for fifth place in the SEC. The Tigers defeated Ole Miss in the first round of the SEC Tournament and then fell to Tennessee in the quarterfinals. LSU is one of nine Southeastern Conference teams to earn a national seed as all 13 teams from the SEC made the NCAA Tournament for the second-straight year.

Scouting the Field
Fordham
Fordham has won six-straight Atlantic 10 tournament championships and comes to Baton Rouge with a 33-21 overall record. The Rams finished second in the conference. The Tigers are 2-0 against the Rams all-time.

UL-Lafayette
Louisiana-Lafayette finished the 2018 regular season with a 38-14 overall. The Ragin Cajuns were 21-6 in the Sun Belt, finishing second behind Texas State. The Tigers and the Ragin Cajuns met in last year’s regional in Baton Rouge. LSU owns a 14-9 record against ULL.

Alissa Dalton leads the Ragin Cajuns at the dish with a .376 average and in RBI with 30. She owns three home runs and has struck out only five times on the year. In the circle, Summer Ellyson is the ace with a 1.43 ERA and a 21-8 record. In 211.0 innings of work, she has struck out 199 batters and holds her opponents to a .173 batting average.

Houston
Houston comes to Tiger Park with a 36-20 overall record. The Cougars have won five out of the last six games and finished second in the American Athletic Conference behind South Florida. The Tigers own a 6-3 record over the Cougars.

What’s On Deck
The winner of the 2018 NCAA Baton Rouge Regional will advance to face the winner of the Tallahassee Regional, featuring host and No. 8 seed Florida State, Auburn, Kennesaw State and Jacksonville State.