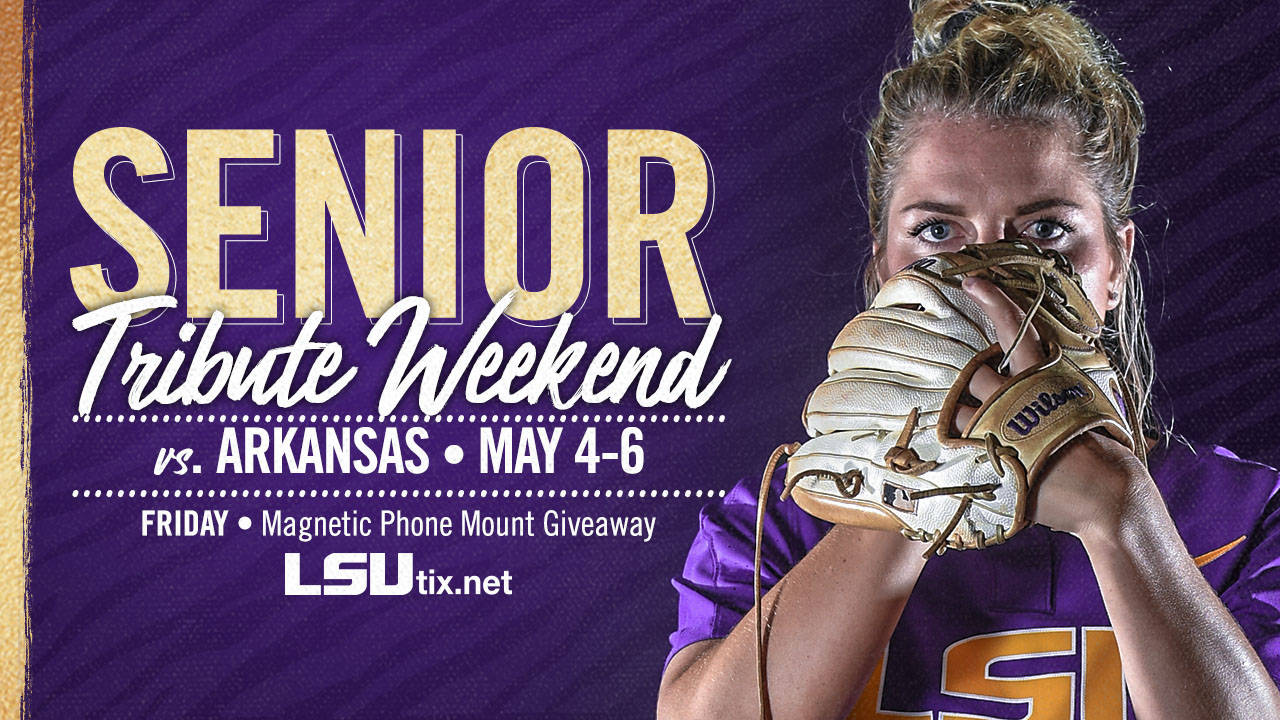 BATON ROUGE – The 13th-ranked LSU softball team will celebrate the careers of four seniors this weekend as the Tigers return home to play host to Arkansas Friday through Sunday.

Game one and two will stream online through SEC Network+ and the WatchESPN app. On the call for game one will be Lyn Rollins and Ben McDonald. Along with Rollins, Yvette Girouard will come in for game two of the series. Game three will air on ESPN2 with Cara Capuano and Jennie Ritter on the call. Live stats will also be available at LSUStats.com.

Tickets
For tickets to this weekend, visit LSUtix.net or call 225-578-2184. A magnetic phone mount will be the giveaway for Friday and LSU will celebrate four seniors all weekend long.

Torina’s Thoughts On 2018 Senior Class
“This class has really just made history and have set the bar to a completely different level. Three trips to the Women’s College World series and countless records along the way, these four have really done such a great job and been a special class for LSU Softball.”

Notes on the Senior Class
Since the four first donned the purple & gold in the 2015 season, the Tigers have ascended to one of the premier softball teams in the nation with back-to-back-to-back appearances in the women’s college world series in 2015, 2016 and 2017, one of only two current senior classes in the nation to accomplish that feat. The four have made regionals the past three seasons with a fourth to follow in the coming weeks and have been ranked every week since they arrived on campus.

Emily Griggs, Carley Hoover, Sydney Loupe and Allie Walljasper were important contributors on the 2015 team that ascended to the program’s first-ever #1 national ranking. The season started off with a 25-game winning streak, which was the best start to a season in LSU athletics history and second best streak among any sport in LSU Athletics history.

During their careers combined, they have 58 wins over Top 25 programs. They have averaged over 47 wins per season and have brought in numerous local, conference and national accolades during their time as Tigers.

About the Tigers
LSU goes into the weekend with a 37-13 overall record and sits in seventh of the SEC with a 10-10 mark. The Tigers are coming off a series loss to then-No. 5 Florida, but the Tigers did take game two from the Gators, shutting them out and giving them their second loss at home this season. Aliyah Andrews and Amanda Doyle continue to lead the offense as they are hitting .328 and .321, respectively. Maribeth Gorsuch came away with her seventh win of the year Saturday as she threw 6.1 innings of the Tigers’ shutout of Florida. Hoover and Walljasper have a 1.26 and 1.05 ERA, respectively.

About the Razorbacks
Arkansas comes to Baton Rouge with a 37-11 overall record and are tied with Tennessee for fifth place in the league with a 12-9 record. Freshman Hannah McEwen leads the squad with a .370 batting average. She owns a team-leading 10 home runs and 51 RBI. Freshman Mary Haff leads the Razorbacks in the circle with a 1.34 ERA. She is 24-4 on the year and has 211 strikeouts in 167.1 innings of work.

What’s On Deck
Despite the outcome of the weekend, the Tigers have secured a spot in the SEC Tournament that will take place in Columbia, Missouri next week. More information to follow at the conclusion of the weekend.