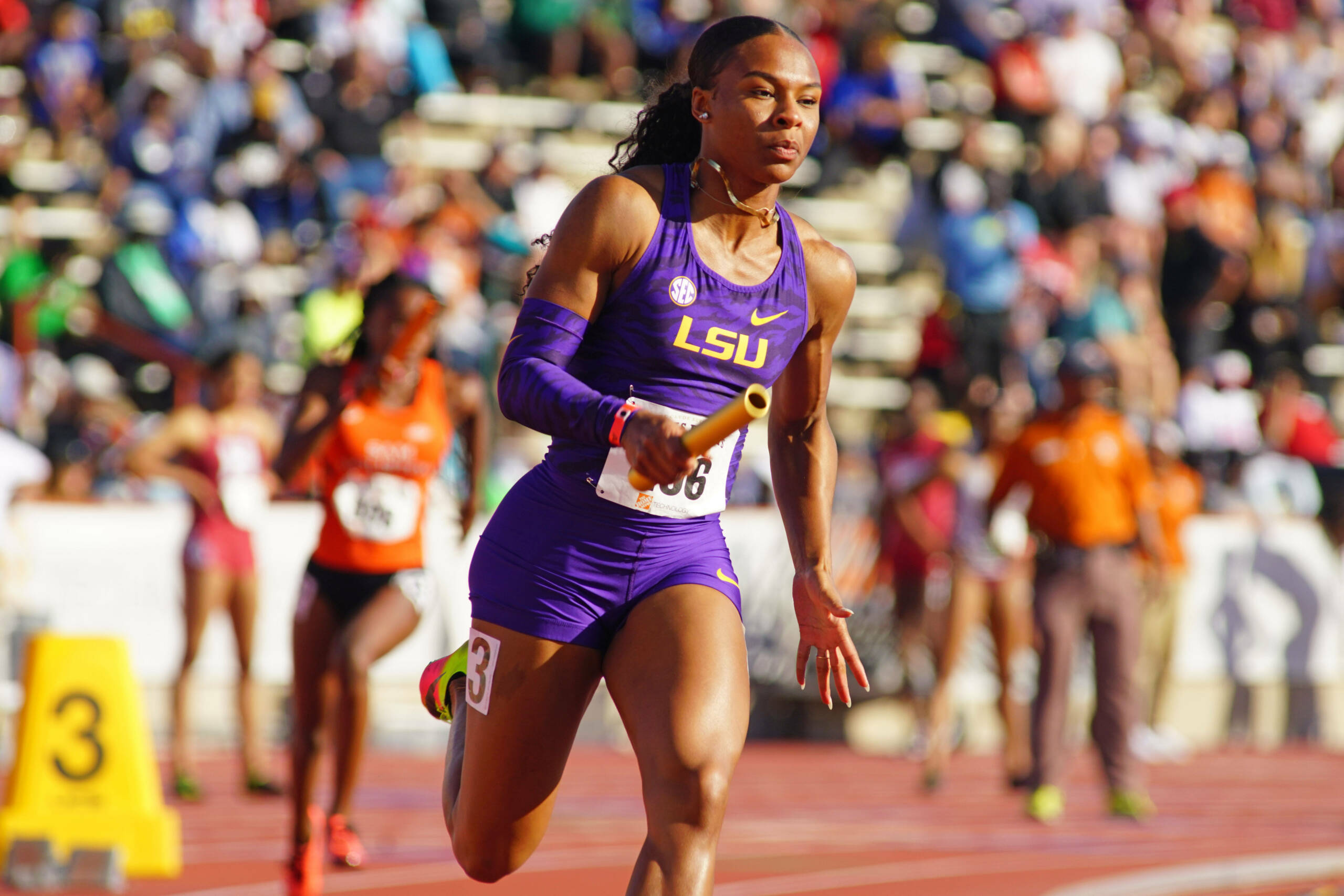 Misher stole the show early on the track with her dazzling 400 meter dash performance. Having never run an individual race under 52 seconds, Misher absolutely crushed her prior best with a career-best readout of 51.68 seconds to finish as the top collegian and in second place overall. The mark is the third quickest in the NCAA this season and it will enter the LSU record book as the ninth best in program history. Misher also served as the lead leg of the women’s 4×400 meter relay that clocked a season-best time. Misher handed off to Brittley Humphrey and the duo of Kymber Payne and Cassondra Hall closed it out to combine for a time of 3:30.34; the season-best mark ranks as the third best in the NCAA.

.@rachelmisher is the top collegiate finisher in the 400 meter dash with a personal best of 51.68! It’s the 3rd fastest time in the NCAA and ranks No. 9 in program history! pic.twitter.com/pgxFNZzi7D

JuVaughn Blake had his best performance of the outdoor season in the high jump. The freshman from Huntsville, Ala., cleared an impressive seven feet, three inches (2.21 meters) to register a personal best. The mark is the fifth-best clearance in program history and it ranks as the ninth-best in the NCAA in 2018.

In the women’s 100 meter dash, Mikiah Brisco and Kortnei Johnson sprinted their way to a one-two finish in the event with wind-aided times of 11.09 and 11.12, respectively. As they have been all year, the duo of Brisco and Johnson were returning to the track individually after another solid performance as members of the 4×100 meter relay. Brisco got things started with the lead leg, Johnson ran the second leg and Misher and Aleia Hobbs closed it out with a winning time of 42.67. The men’s 4×100 meter relay squad of Akanni Hislop, Renard Howell, Correion Mosby and Jaron Flournoy combined to clock a winning time of 39.39.

Three more freshmen – Abby O’Donoghue, Jake Norris and Damion Thomas – continued their extraordinary freshmen campaigns. Donoghue narrowly missed out on a personal best on her way to a first-place finish with a clearance of 5 feet, 10 and a half inches (1.79 meters). Norris registered his best hammer throw in nearly a month with a heave of 235 feet, four inches (71.72 meters) for his gold. Thomas clocked the fastest wind legal 110 meter hurdle time of his collegiate career with a 13.58 on his way to earning the top collegiate spot in the event.

The most impressive alumni showing came from current volunteer assistant coach and 2016 Rio Olympian, Gabriel Mvumvure. A few short months after representing his home country of Zimbabwe at the 2016 Olympic games, Mvumvure found out he was in need of a kidney transplant. Fast forward to the fall of 2017 and Mvumvure received the kidney donation from his girlfriend. His amazing journey was capped with a performance in the 100 meter dash this afternoon in which he clocked a time of 11.44.

2 years ago he realized his dream and was an Olympian.

12 months ago he needed a new kidney.

6 months ago he got one.

Today he lined up to show the youngsters that he’s still got it.

Four former Tigers – Nethaneel Mitchell-Blake, Michael Cherry, Ryan Fontenot and Kimberlyn Duncan – won their respective events on Saturday afternoon at the Alumni Gold meet. Mitchell-Blake, a 2017 world champion as a member of the Great Britain 4×100 meter relay team, won the 100 meter dash with a time of 10.08. Kimberlyn Duncan, the only woman in the history of LSU track and field to win The Bowerman, ran a smooth 22.74 in the 200 meter dash to claim her title. Ryan Fontenot edged the aforementioned Damion Thomas in the 110 meter hurdles with a winning time of 13.76 and Michael Cherry easily ran away with the 400 meter dash title with a time of 45.39.