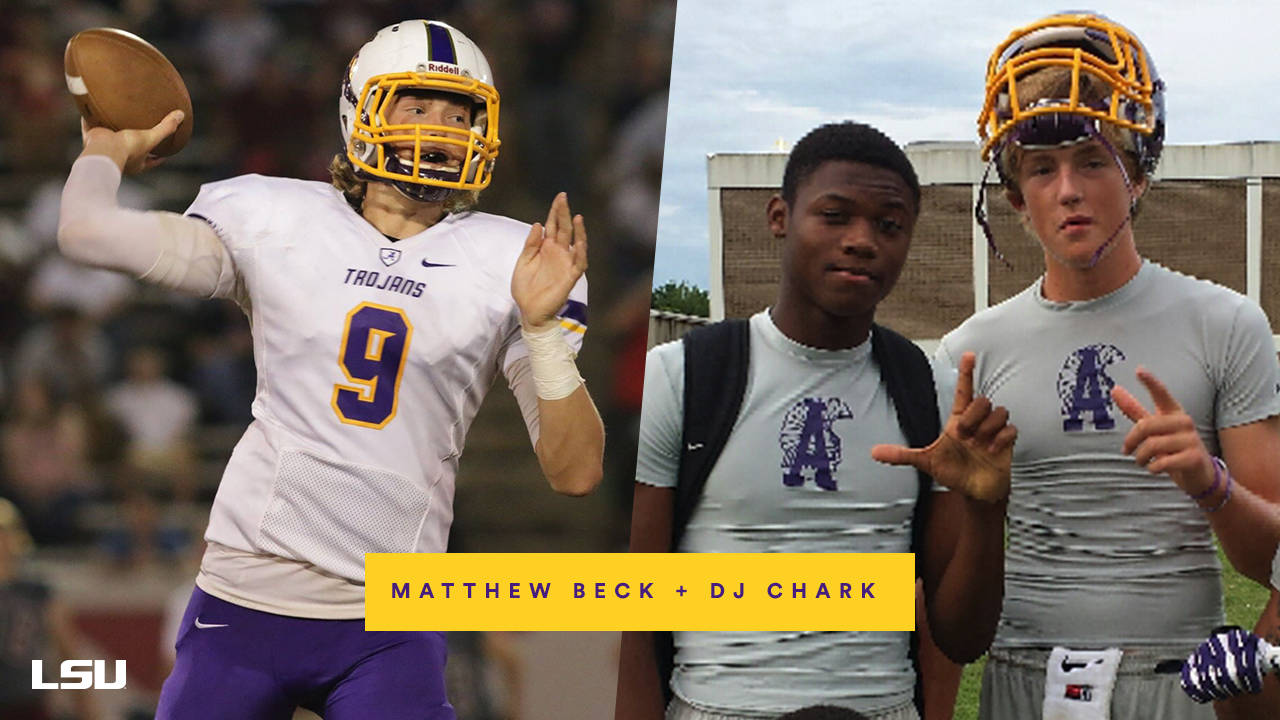 Pulitzer Prize winner Jeffrey Marx is the author of “Walking with Tigers: A Collection of LSU Sports Stories” and five other books. You can follow him on Twitter: @LSUTigersBook

OK, Tiger fans, with the NFL Draft next week and LSU wide receiver DJ Chark projected as an early-round pick, we have a trivia question for you.

During the last two seasons – Chark’s junior and senior years – he made a total of 66 receptions. Danny Etling threw 64 of those passes. Myles Brennan threw two.

So here is the question: Prior to Chark catching all those balls from Etling and Brennan, who was the last quarterback to complete a pass to him in a regular-season game?

If you’re guessing Brandon Harris, the LSU quarterback in 2015 – Chark’s sophomore year – your guess is a good one. It is also wrong.

Anthony Jennings, who played QB in 2014, is another logical guess. It, too, is wrong.

That’s right. Chark saw limited action and never caught a pass during his freshman and sophomore seasons at LSU. His last official reception from anyone other than Etling or Brennan came as a high school senior.

And his quarterback at Alexandria Senior High School (ASH) was a big, cannon-armed kid – two years younger than Chark – who now stands 6-foot-7 and is one of the LSU baseball team’s best relief pitchers.

“Matt had one of the strongest arms of anyone I had ever run routes with and caught from,” Chark says. “One thing I knew, I never had to worry about him underthrowing me.”

It allowed the young quarterback to become comfortable with a simple strategy he now explains this way: “Just sling it – just throw the ball as far out there as I could – because I always knew DJ had the speed to go get it.”

Beck and Chark became good friends in high school. They spent countless hours training and practicing together. They have enjoyed pulling for each other while playing different sports at LSU. But the story of their connected athletic journeys has gone virtually unknown outside of Alexandria.

It is a tale of two hard-working kids who always carried big hopes – parts of their dreams already fulfilled by competing at LSU, other pieces still moving toward the clarity of storybook endings.

Beck credits Chark for being a great role model who – from day one as high school teammates – showed him how to be a humble and supportive leader.

“As the older guy, he really took me under his wing,” Beck says. “DJ showed me how to lead a team, how to be a good locker-room guy. And he always had a quiet confidence on the field. I think that was one of my biggest takeaways – how he was always able to handle the pressure situations. He was always able to respond and handle pretty much anything.”

Chark credits Beck for helping him make enough plays to draw the attention of college recruiters and for always putting in extra practice time with him … both in and out of season.

“I knew when I went to college, there were going to be guys throwing it hard, 100 miles an hour,” Chark says. “Matt was the only guy I knew who could do that. So I made sure we always ran routes together, we used to go play seven-on-seven together on our off time – whatever we could do to get better.”

They first played varsity football together in 2012. Chark was a junior – already a star for the ASH Trojans. Beck was only a freshman. Several games into the season, he got his initial chance to play, first coming off the bench in one game and then being elevated to starter for the next. But Beck suffered a concussion in his first start and could not play again the rest of the year.

That only added to the anticipation as the 2013 season approached. For the first time, ASH was moving up from Class 4A to 5A, meaning its opponents would be tougher than ever. Chark was a senior speedster looking to make his final mark as a schoolboy. Beck was a 6-foot-5, 200-pounder – a self-described “baby giraffe” – his agility still a work in progress. But his right arm was fully loaded and ready to go.

“DJ and Matthew, those were two powerful weapons to have on our football team,” says Brad Chesshir, then the head coach. “Of course, DJ was our go-to guy, and Matthew knew that. Matthew gained a lot of confidence through DJ, because DJ made plays. If Matthew could get the ball to him, DJ was going to make a play.”

They did indeed make plenty of plays together.

The game against West Monroe, traditionally a powerhouse program, was one for their personal record books. ASH lost in a wild 48-33 shootout – its record dropping to 1-5 – but Beck and Chark connected on 13 passes for 120 yards and two touchdowns. It is still the most catches Chark has ever had in a game.

Then there was the big matchup against rival Pineville. Late in the fourth quarter, ASH trailed by a touchdown and got the ball at its own 30-yard line. Beck and Chark first connected on a 28-yard pass play that a facemask penalty stretched into a 43-yard gain. Soon thereafter, with 46 seconds left in regulation time, they again connected, this time on a dramatic 16-yard touchdown pass that forced the game into overtime (and ASH ultimately won).

Five years later, Beck is able to laugh at himself as he reveals that his last-minute touchdown pass actually involved more drama than anyone else ever realized.

That was because – after calling a play his team knew as “Ole Miss” – Beck went blank and couldn’t remember what routes his receivers were going to run.

“I guess I can say it now,” Beck hesitantly offers. “I never even knew where DJ was going to be. I just knew I was going to look for him, and if I could see him open, I was going to throw it to him.”

Beck found Chark on a crossing route. Chark caught the ball at the 5-yard line, eluded a defender, dove toward the end zone, and made it just across the goal line for the heart-pounding score.

“That was a big-time throw over the middle,” Chark recalls.

Then he is told something he never knew – that Beck had somehow executed the play without even knowing what it was.

“Really?” Chark says. He laughs. He compliments Beck for making a perfect pass under such stressful circumstances.

Then he says this: “We completed it, so that’s all that mattered. We won that game. We only won two games that year. So maybe it was a good thing Matt didn’t know the play!”

Chark left for LSU after he and Beck had that one full season together.

Beck had two more years as a high school quarterback. He had an impressive run – once passing for an eye-popping 537 yards in a single game and later earning All-State recognition for the whole of his senior season.

“I definitely think he could have been a college quarterback … and been pretty good,” Chark says. “But I’m glad he was able to do what he loves and be a baseball player at LSU. That’s huge.”

The hometown buddies have enjoyed being together at LSU.

They talk. They text. They see each other in the weight room. And each loves letting everyone know when the other is doing well.

Chark says he enjoys supporting his favorite baseball player via social media: “I love when I can see a tweet that says Matthew Beck did this or that, because I’m definitely retweeting it.”

Beck can’t wait to see his friend picked in the NFL draft. After being named co-MVP of the Senior Bowl and then shining at the NFL Combine – leading all receivers in both the 40-yard dash (4.34 seconds) and vertical jump (40 inches) – Chark has climbed significantly in mock drafts.

“I’m so excited for him,” Beck says. “Whatever team picks him, they’re going to have a great football player and an even better person.”

Chark is equally excited about continuing to see Beck progress as a pitcher. He is already doing well. In 15 relief appearances this season, Beck has yielded only two runs in 18 2/3 innings, giving him a stellar ERA of 0.96. He has one win and no losses.

“I want to see him take over,” Chark says. “I feel like he definitely has the ability to … and then there will be two players from Alexandria that put their names in the books here.”

Who knows? Perhaps that will also lead to another good trivia question: Who are the high school football teammates from Alexandria who shared a couple of years at LSU and are now playing two different professional sports?