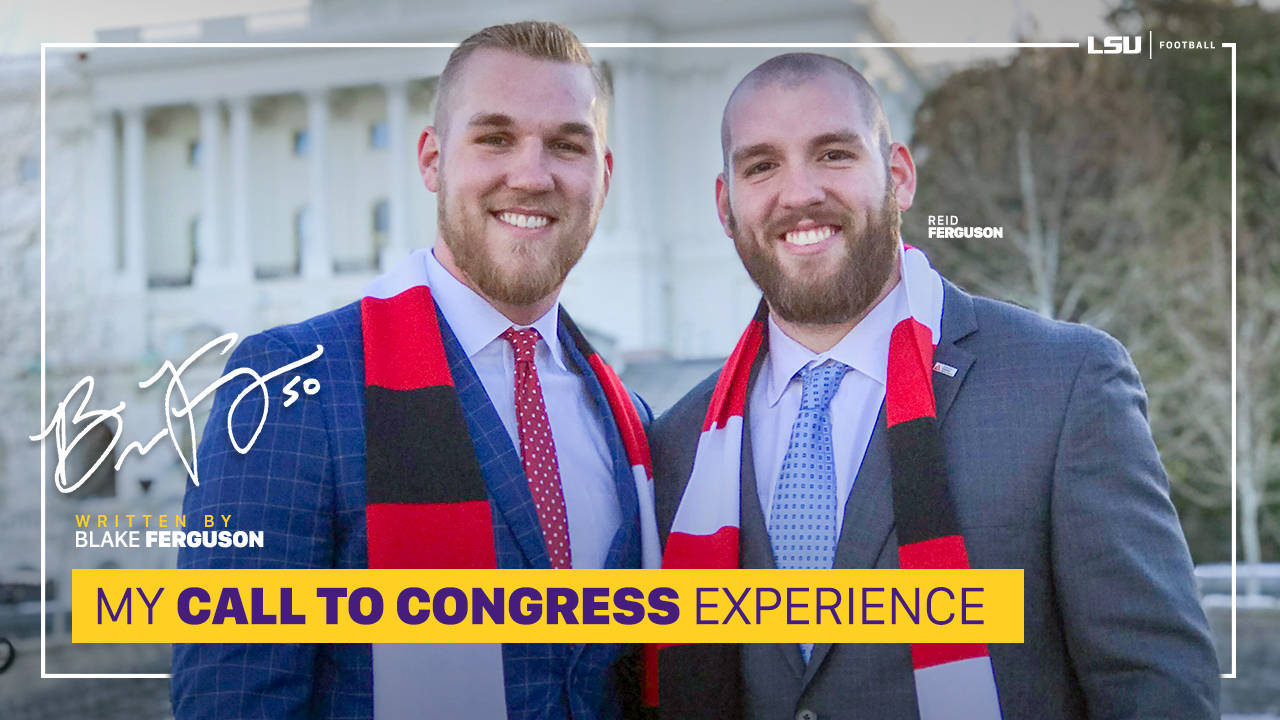 Editor’s Note:
The following is a first-hand account of LSU long snapper Blake Ferguson’s experience when he traveled to Washington D.C. in March to advocate for the American Diabetes Association and their mission to bring awareness to this disease.

My “Call To Congress” Experience
By Blake Ferguson

Recently I had the distinct pleasure of traveling to Washington D.C. as a part of Team Tackle to advocate for the American Diabetes Association (ADA) and their research initiatives, as well as diabetes prevention across the nation. Team Tackle is a group of current and former NFL players who take part in the ADA’s annual Call to Congress.

I was fortunate this year to be invited along to provide some insight on what my experience has been like as a college football-playing Type 1 Diabetic. I have been a Type 1 Diabetic for seven years now so I knew this would be a good opportunity to share my story with the Congress members with whom we would be meeting. My brother, Reid, who is a current member of the NFL’s Buffalo Bills, also participated in the event as part of Team Tackle, and I couldn’t have been more excited to have him by my side, because diabetes affects an entire family, not just one member.

Diabetes in America, both Type 1 and Type 2, are at an all-time high, and unless we make a concerted effort to bring more awareness to this, more lives will continue to be affected. Type 1 is usually diagnosed in children, and was previously known as juvenile diabetes. In Type 1 diabetes, the body does not produce insulin, which helps regulate blood sugar. Type 2 is more often linked to lifestyle (diet and exercise), and while the body makes insulin, a condition is developed called insulin resistance, which prevents the body from effectively regulating blood sugar levels. There are currently around 30 million Americans living with both types of diabetes and 85 million who are at-risk for Type 2 based on their lifestyle habits as well as the environment they live in.

During Call to Congress, advocates from all over the U.S. who have also been affected by diabetes in some capacity, are paired with members of Team Tackle to meet with the Senate representatives from their home state. Since diabetes is so prevalent in the state of Louisiana, and both Reid and myself represent LSU, we were paired with advocates from all over the state of Louisiana.

I flew to D.C. early on the morning of March 21st and connected with my brother in Atlanta during my layover. That evening, we had some training and preparation for a big day on the Hill! We got an early start the next morning, ate breakfast with the advocates then bussed to the Hill for a day of work. When we arrived, we immediately went into a press conference with Dr. Will Cefalu, who is the Chief Scientific and Medical Officer for the ADA. He presented the research data for 2017 and the financial report for how much diabetes is costing us as a country both physically and fiscally. I might also add that he is an LSU Alum!

From there, we began our meetings with representatives from the offices of Louisiana Senators John Kennedy and Bill Cassidy. In the meetings, Reid and I were able to tell our story about how diabetes has affected not only me, but our entire family. We were also able to express to them the alarming rate at which diabetes is spreading in the U.S. and how we need the help of the federal government to take necessary measures to slow this rampant growth. The reception of these ideas and requests was very positive as both Senators Kennedy and Cassidy have voted in favor of continued progress toward diabetes prevention and eradication in previous years.

I am confident that because these meetings were so successful, we are making great strides toward bringing about more awareness for Type 1 as well as education for prevention of Type 2 in the state of Louisiana and all over the country. I encourage everyone to visit http://www.diabetes.org/are-you-at-risk/diabetes-risk-test/ take the 1-minute Type 2 diabetes risk test see if you are at risk for developing diabetes; and if you are, taking the right steps to avoid it.

I am very grateful for the opportunity to represent millions of Americans and to fight to find the cure. I am confident that it is coming soon. Thank you for taking the time to learn about my experience as my hope is that sharing this story will inspire others to get involved in this fight.

Making a difference one American at a time. Thank you to @AmDiabetesAssn for allowing us to be a part of this phenomenal cause! #TeamTackle #ThisIsDiabetes pic.twitter.com/RSkUC5Kmqp