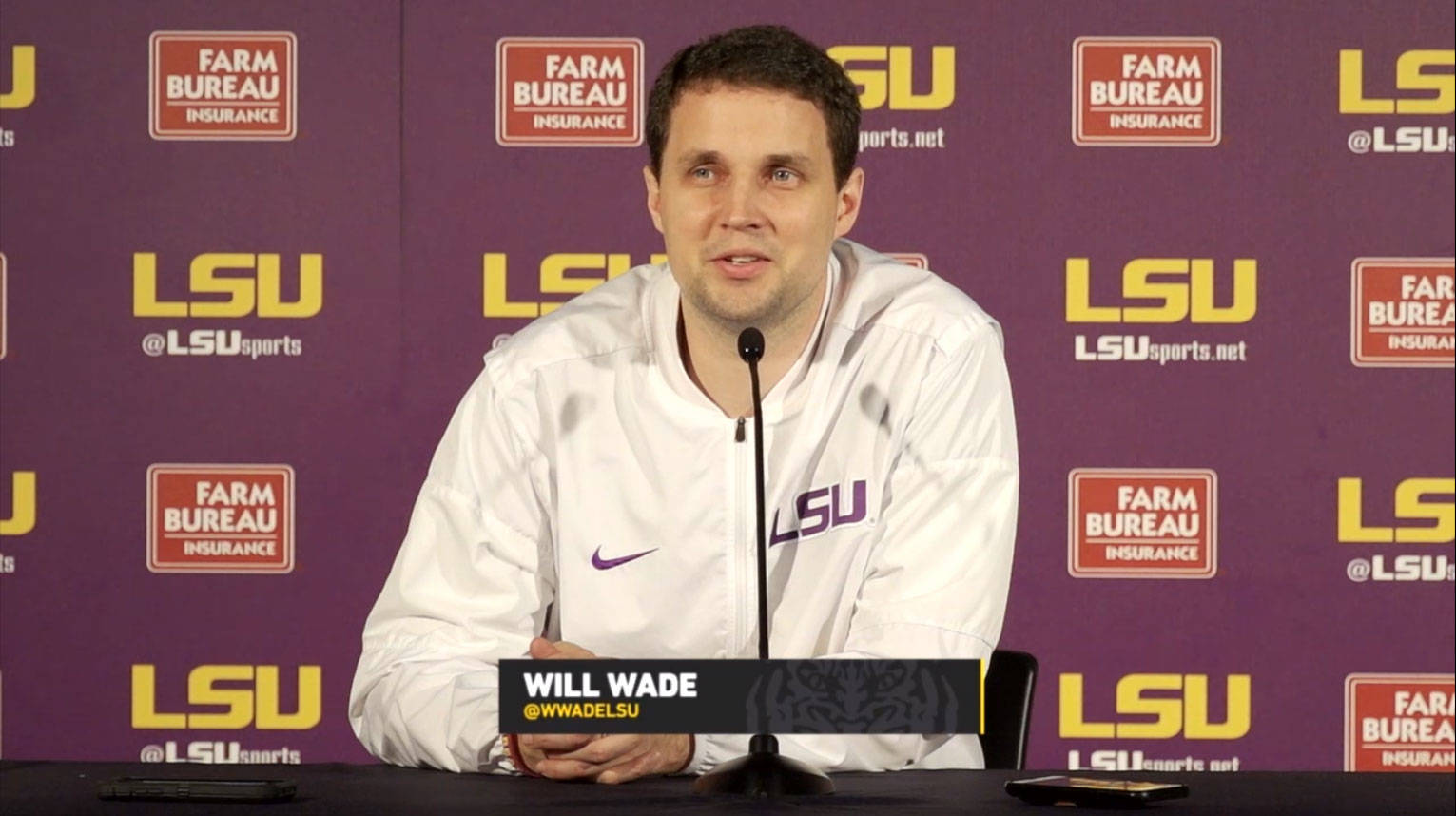 BATON ROUGE – Coach Will Wade met with the media on Monday to discuss several different topics regarding the past season and the future of the LSU basketball program before he joins the LSU coaching staff for the annual coaches’ convention at the NCAA Final Four this weekend in San Antonio.

In Coach Wade’s opening season, the Tigers improved by eight wins to 18 total wins in 33 games and six more wins in the Southeastern Conference at 8-10. The Tigers advanced to post-season play in the National Invitation Tournament, winning at the Maravich Center in the opening round for the first time in four tries. The Tigers scored an 84-76 win over UL-Lafayette before ending the season at Utah in the second round.

The next major event will come for the team in April when the spring signing period begins on April 11, 2018. The Tigers are expected to sign at least one player for the 2018-19 season.

Here are a few of the questions that Coach Wade answered during today’s session:

Q — How much work is being done for future years (in recruiting) and the type of guys you are looking for?

Coach Wade: “We are already working on the next class. We are working two classes ahead in recruiting. We need tough, defensive minded guys. Guys who will mix it up a little bit. But we are looking for guys in 1919 and 2020. We’ll be able to see a lot of those guys in the next couple of weeks at AAU tournaments.”

Q – The priority list for the program both on and off the floor.

Coach Wade: “We want to still be playing this time of year. That’s what we want to be doing. We’ve got a plan on where we think our program is now and what we need to do to move it forward, both internally as a staff and externally. We’ve gone over that. We’ll go over that with our players next week once they get back from spring break and we’ll move accordingly from there. Roster, facilities, marketing, player welfare, everything.”

Q – His thoughts on how he felt about the season.

Coach Wade: “I think by all measures it was a fairly successful season. Not where we wanted it to be. But from where we came from, in terms of overall wins, SEC wins, I think most people would determine it a success. But I think our lack of consistency; our lack of defensive identity; our rebounding really hurt us and that’s why we weren’t able to have an even better year than we had. I think we got a lot out of some guys, some role players …”

Q – Thoughts on the class coming in.

Coach Wade: “It’s a step in the right direction. Plus we have Kavell (Bigby-Williams) as well. Kavell is somebody that can helps us down low. He brings a physical presence; a shot-blocking presence. He is somebody that can help us there as well. We feel good about whom we have coming. The guys that are coming back are pretty good too. Those guys are going to be the ones that are going to be carrying the bulk of the weight in terms of how we do things and teaching those freshman what we do.”

(NOTE – Signee Naz Reid plays in the McDonald’s All-American game from Atlanta on Wednesday night, while signee Ja’Vonte Smart will play in the Jordan Brands Classic game on April 8 in Brooklyn.)

Q – Brandon Sampson had a great game the day before he was hurt. Talk about Brandon and Skylar Mays as to what you see for them?

Coach Wade: “Skylar has really improved. I think I did a poor job with Sampson. When he came back from his injury he probably didn’t have a good feel for his role with the team. He’s such a nice kid, he just tries to fit in a little bit. If you look at our roster we certainly got the most out of the kids but we didn’t come anywhere near getting the most out of him. That’s certainly my fault. It’s not his fault. I could have handled that better and put him in better positions and that’s what we are going to focus on moving forward. (Sampson) is a very talented player and he can make plays and we’ve got to bring that out of him.”

Q – Backcourt next year with so many players.

Coach Wade: “We play two point guards. We did that this year. That’s what we’ve always done. If you can put three guys out there that can play off an on-ball screen, that’s a pretty hard offense to stop. We will certainly have three guys that can play off an on-ball screen. Sampson is a pretty deadly shooter. There are a lot of different ways to play. You can play four guards. We have a lot more versatility with our roster which is good.”

Q – Next year’s team already getting the expectations from the fans. How do you handle that?

Coach Wade: “I think it’s great. You don’t want to be anywhere with no expectations. I can promise you whatever (the fans) expectations are, they are not as high as mine. I’m disappointed we didn’t make the NCAA Tournament with this team. We were probably two games away and we had chances. That’s our full expectation next year – to compete at the top of the SEC and make the NCAA Tournament. Now when you get there, crazy stuff can happen as you see. That’s our expectation for this team moving forward.”

Q – With the new personnel coming in next year, how different will this team look?

Coach Wade: “Quite different. We will play a little bit faster. We will hopefully play better defensively. We hope we are better on the glass. I want to pick up more in the full court. Offensively, we were so reliant on jump shots, we have to get easier stuff at the rim. We were such a jump shooting team. That’s probably why we couldn’t win on the road because you don’t shoot it as well on the road. We want to be a little more solid team.”