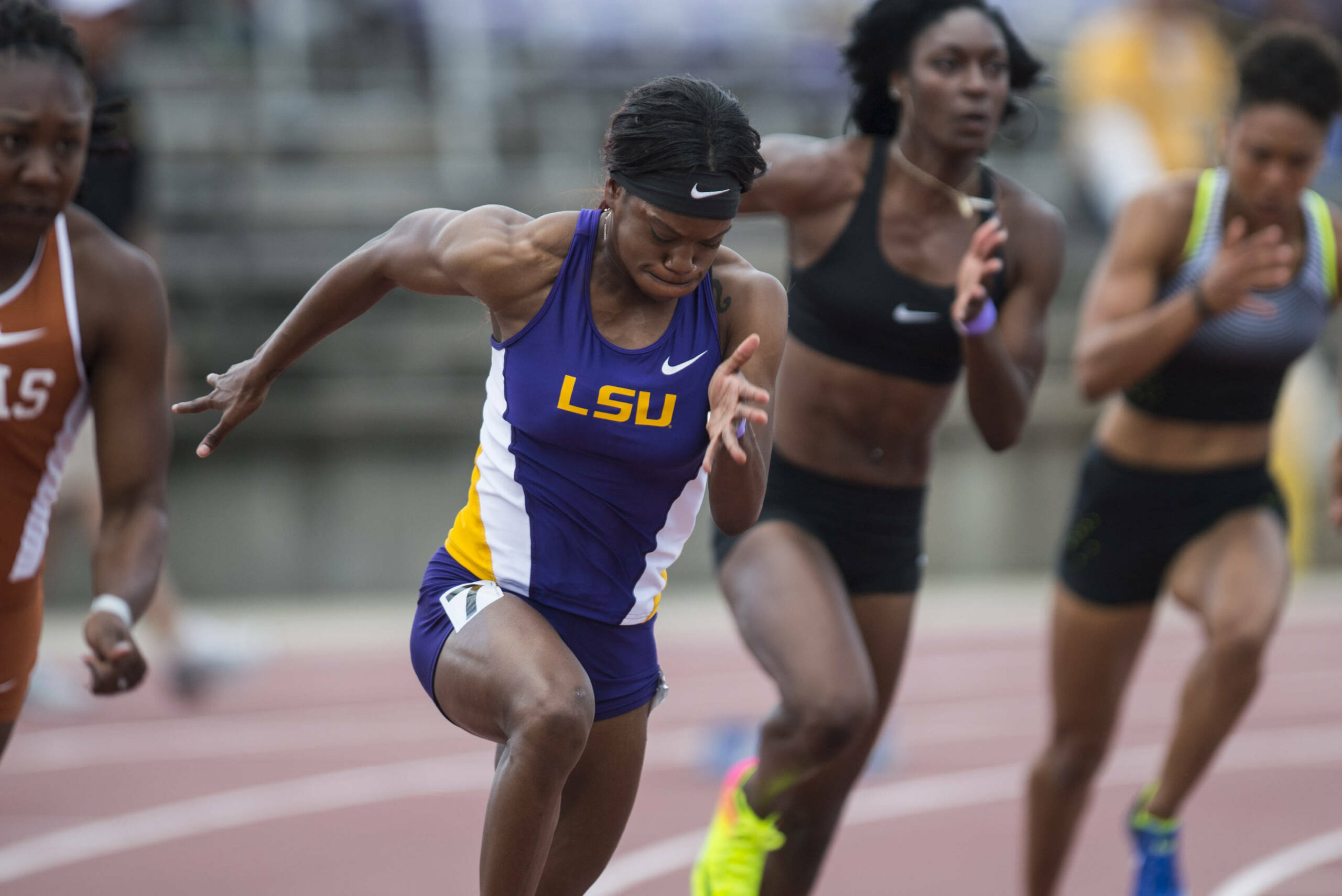 TEMPE, Ariz. – As the LSU track & field teams completed Day Two at Sun Angel Stadium, the Tigers and Lady Tigers combined for 13 event titles with PRs and national top times along the way. The women finished in first place in the Pac-12/Big Ten Invitational with 130 points, and the men compiled 128 points for second place.

In the men’s 4×100-meter relay, the quartet of Kary Vincent Jr., Renard Howell, Correion Mosby and Jaron Flournoy were crowned event champions, scorching the competition in a national-best time of 38.84 seconds.

The Lady Tigers 4×100 relay team also hold the nation’s top mark on the women’s side with their 42.65-second time a week ago, and the team of Mikiah Brisco, Kortnei Johnson, Cassondra Hall and Aleia Hobbs also captured first-place this weekend in a mere 42.99 seconds.

The 4×400-meter relays teams followed suit with event-titles of their own. The men’s team of Jahnoy Thompson, Mosby, Howell and Flournoy paced all men teams, recording a time of 3:07.16.

The Tigers recorded a second field event title in the final one of the meet as Christian Miller took home first-place of the men’s triple jump with a leap of 50’ 6” (15.39m).

The Tigers and Lady Tigers dominated the sprint and hurdle events on the second day of competition, combining for six first-place finishes.

Thomas captured the first track title for the Tigers, leading all men in the 110 hurdles with a time of 13.79 seconds. Arthur Price rounded out the top five with a fifth-place time of 14.52.

Christian Boyd captured a title of his own for the men, recording a time of 51.00 seconds in the men’s 400 hurdles.

Rachel Misher and Cassondra Hall went 1-2 in the women’s 200 meters with times of 23.10 and 23.23 respectively. Kymber Payne set a personal record in the event at 24.14 for seventh place.

More Points On The Board

In the women’s 400-meter hurdles, Brittley Humphrey (59.21) and Jurnee Woodward (1:00.12) finished in second and fourth-place respectively, both marking personal-bests. Milan Young placed ninth at 1:01.79 for a top-10 finish.

Oksana Lawrence added points to the women’s total with a third-place finish in the women’s 400 meters with a time of 54.98, while Jahnoy Thompson placed fourth in the men’s race in 47.52.

Ersula Farrow finished in fourth place in the 800 meters with a time of 2:07.49. Jack Wilkes and Cameron Cooper picked up points for the men in the same event with fourth-place and seventh-place finishes in 1:50.47 and 1:50.80, respectively.

In the men’s 200 meters, Lewis and Mulugata posted times of 22.03 and 22.17 respectively for sixth and seventh place.

Next week, the Tigers and Lady Tigers will head to Mike A. Myers Stadium in Austin, Texas to compete in the annual Texas Relays. The meet will span four days, beginning on Wednesday, March 28 and will conclude on Saturday, March 31. The first LSU competitors will see action on Thursday, March 29 with events scheduled to begin at 11:00 a.m. CT.