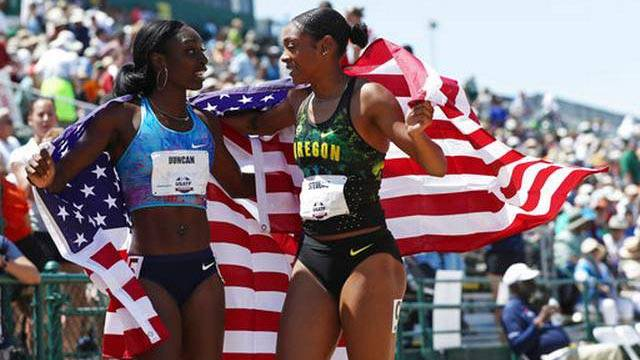 SACRAMENTO, Calif. – Former LSU teammates Kimberlyn Duncan and Charlene Lipsey became teammates once again Sunday at the 2017 USA Track & Field Championships as both earned a spot on Team USA heading to the IAAF World Championships as silver medalists on the final day of competition at Hornet Stadium.

Lipsey booked her first ever trip to the World Championships in the women’s 800-meter run as she recorded a lifetime personal best of 1 minute, 58.01 seconds in Sunday’s final for the fourth-fastest time in the World rankings for the 2017 outdoor season.

Duncan followed by making her long-awaited return to Team USA for the second time in her career after debuting at the World Championship in Moscow, Russia, following her senior season at LSU in 2013. The former U.S. Champion in the women’s 200-meter dash earned the title of silver medalist in the event on Sunday with an impressive time of 22.59 seconds run into a headwind of -2.5 meters per second.

They rounded out LSU’s qualifiers for Team USA this weekend as five current and former athletes earned the right to compete in London with the 2017 IAAF World Championships in Athletics being held Aug. 4-13. Also competing later this summer will be 2016 IAAF Diamond Trophy winner Cassandra Tate in the women’s 400-meter hurdles, 2017 U.S. Bronze Medalist Rodney Brown in the men’s discus throw and Michael Cherry in the six-man pool for the men’s 4×400-meter relay team.

Lipsey has enjoyed her best season as a professional as she followed an outdoor PR of 1:59.56 in Friday’s semifinal with a new lifetime best of 1:58.01 in Sunday’s final to win the 800-meter silver medal behind the new U.S. Champion Ajee’ Wilson, who set the pace in the event with the third-fastest time in the World this season.

Brenda Martinez rounded out the Team USA members in the women’s 800 meters when she crossed the finish line as the bronze medalist in the event with the No. 6 time in the World this season at 1:58.46.

Until her performance in Sunday’s 200-meter final, Duncan hadn’t reached the heights of her 2013 season when she ended her collegiate career as a seven-time NCAA Champion and qualified for Team USA as the U.S. Champion when she ran her career-best all-conditions time of 21.80w in the 2013 USATF final. She returned to the World stage while edging 2016 Olympic Bronze Medalist Tori Bowie (22.60) for second place.

Oregon junior Deajah Stevens stormed to the 200-meter title as she was nearly three tenths of a second in front of Duncan with a winning time of 22.30 to lead the trio into the World Championships in the event.

Former Tiger All-American Quincy Downing came up three places short of a spot on Team USA in the men’s 400-meter hurdles as he ran 48.70 for sixth place while lining up in his fourth-straight USATF final. Former LSU hurdler Ryan Fontenot also saw his run at the USATF Championships come to an end in the semifinals of the men’s 110-meter hurdles as he clocked 13.90 (-0.9) for fifth place in the first heat and 13th place overall.