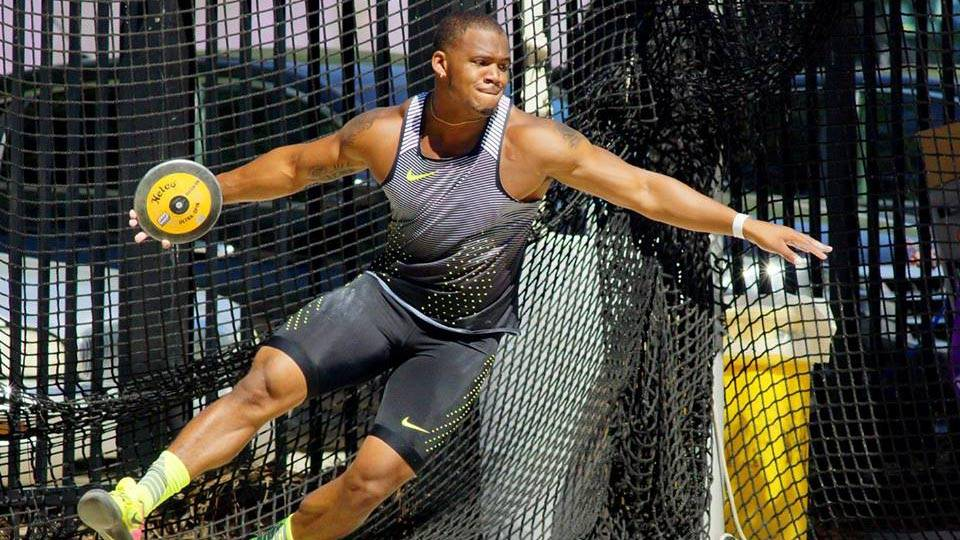 SACRAMENTO, Calif. – Former LSU All-American Rodney Brown will make his return to the IAAF World Championships in Athletics later this summer after earning his spot on Team USA with a bronze-medal-winning third-place finish in the men’s discus final held Saturday afternoon at Sacramento State’s Hornet Stadium.

This year’s World Championships will be held Aug. 4-13 as the top-three finishers in each event at the USA Track & Field Championships this weekend with the qualifying standard will compete for Team USA.

Brown became LSU’s third medalist in the throws at the USATF Championships this weekend after senior Johnnie Jackson scored the silver medal in the men’s hammer throw and senior Rebekah Wales took home the bronze medal in the women’s javelin during Thursday’s opener. Mason Finely won the men’s discus ahead of Brown with a throw of 206-9 followed by Andrew Evans in second place at 205-3.

Brown has already eclipsed the World Championships qualifying standard of 213-3 twice this season with marks of 214-1 at the CVEATC High Performance Meet in Chula Vista, California, on May 27 and his seasonal best of 214-6 at the Iron Wood Classic in Coeur d’ Alene, Idaho, on June 2.

Brown enjoyed an outstanding collegiate career with the Tigers from 2012-15 during which he earned All-America honors as a sophomore in 2013 and captured two SEC titles in 2013 and again as a senior in 2015.

Two LSU Track & Field products came up just short in their bid to join Brown on Team USA as senior Michael Cherry placed sixth in his first USATF Championships final in the men’s 400-meter dash and former Lady Tiger Jasmin Stowers finished eighth in the final of the women’s 100-meter hurdles to close out the day’s action at Hornet Stadium.

Cherry, who won his semifinal heat on Friday with a time of 45.05, set a new personal best in Saturday’s 400-meter final with a run of 44.67 for sixth place in the race. He broke his previous PR of 44.73 run in the prelims at the NCAA Championships two weeks ago.

Can ask for more than a pr!! Relay pool spot not the open but can’t complain‼️‼️‼️🙏🏾

Texas A&M’s Fred Kerley won the men’s 400-meter title with a time of 44.03 as he overtook runner-up Gil Roberts (44.22) in the final stages of the race for the title of U.S. Champion. Baylor’s Wil London ran 44.47 for a bronze medal and the third spot on Team USA heading to the World Championships in the event.

Stowers entered the final of the women’s 100-meter hurdles on Saturday afternoon as the No. 1 seed after winning the first semifinal heat earlier in the day with a world-leading time of 12.47 (+0.9).

But the former LSU All-American managed an eighth-place finish in the final after crossing the finish line in 12.94 (-1.7) in Saturday’s finale. World-record holder Kendra Harrison captured the women’s sprint hurdle title with a winning time of 12.60 in the final, followed by Nia Ali (12.68) in second place, Christina Manning (12.70) in third place and Dawn Harper (12.78) in fourth place.

Former Tiger standout Quincy Downing advanced to his fourth-straight USATF final in the men’s 400-meter hurdles on Friday when he clocked his second-fastest time of the 2017 season at 48.76 for the runner-up spot in the second semifinal heat. Kerron Clement won the heat with the fastest time of the day at 48.61.

Downing, the World’s No. 2-ranked performer this season, is a strong contender to make the World Championship team for the first time with a seasonal best of 48.13 from the Grenada Invitational in May. The final of the men’s 400-meter hurdles will run at 3:56 p.m. CT during Sunday’s championship finale.

Kimberlyn Duncan, a seven-time NCAA Champion during her LSU career from 2010-13, took a step toward qualifying for her second World Championship team on Saturday when she advanced fourth overall in the first round of qualifying in the women’s 200-meter dash. Her time of 22.74 (-1.8) earned her second in the first prelim heat behind reigning Olympic Bronze Medalist Tori Bowie (22.69).

Duncan is looking to return to the World stage for the first time since her senior season at LSU in 2013 when she was crowned the U.S. Champion in the event when she won a dramatic final at the USATF Championship with a wind-aided 21.80 ahead of nine-time Olympic medalist Allyson Felix (21.85w).

Former LSU hurdler Ryan Fontenot also advanced from the first round of qualifying in the men’s 110-meter hurdles on Saturday as he clocked 13.79 (-0.9) for third place in the third heat and 13th place overall.

Rounding out LSU’s athletes competing Saturday were seniors Tremayne Acy and Jada Martin in the 200-meter dash as Acy sprinted to the finish line in 20.97 (+0.2) for sixth place in the first heat and 20th overall for the men’s prelims and Martin clocked 23.39 (-1.6) for 20th place in the women’s field and fifth place in the fourth qualifying heat.