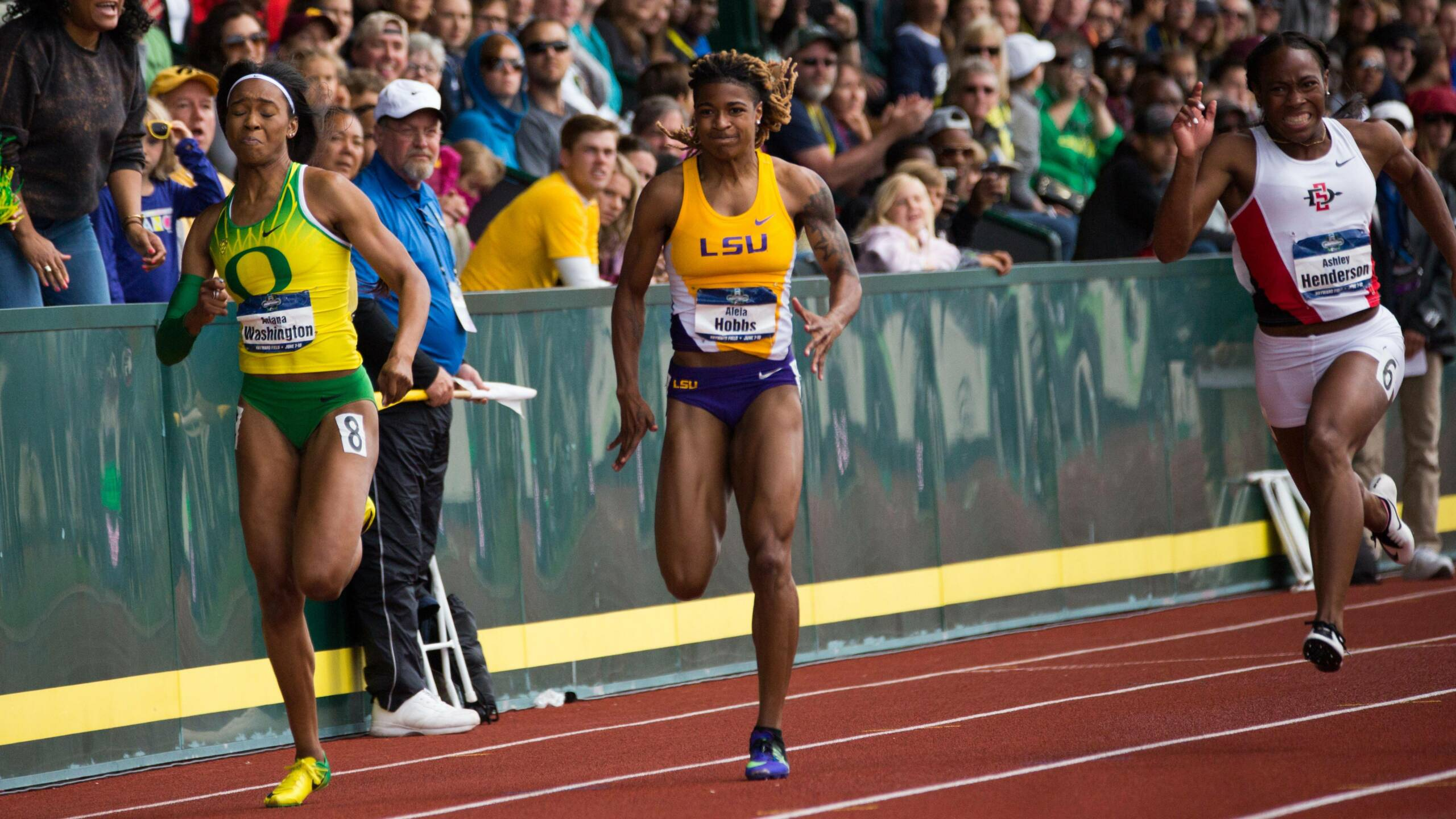 SACRAMENTO, Calif. – LSU’s junior All-American Aleia Hobbs capped an outstanding 2017 season on Friday night by lining up in her first career 100-meter final at the USA Track & Field Outdoor Championships where she earned a seventh-place finish on the second day of action at Sacramento State’s Hornet Stadium.

Hobbs, the fifth-place finisher in the 100-meter dash at the NCAA Championships two weeks ago, clocked back-to-back times of 11.23 seconds in both the semifinal and final rounds to earn her position among the best sprinters in the United States for the 2017 outdoor season.

Tori Bowie, the reigning Olympic Silver Medalist in the 100-meter dash, was crowned the 2017 U.S. Champion with a winning time of 10.94 (+0.3) in the final, while Oregon teammates Deajah Stevens (11.08) and Ariana Washington (11.10) earned the two remaining spots on Team USA in the event while finishing second and third, respectively.

The top-three finishers in each event at the USATF Championships who have achieved the qualifying standard will compete for Team USA at the IAAF World Championships in Athletics in London this summer.

Advancing in Friday’s qualifying events as heat winners were former Tiger All-American Quincy Downing and two-time NCAA Outdoor Bronze Medalist Michael Cherry as Downing cruised in the third preliminary race of the men’s 400-meter hurdles before Cherry edged the field in the second semifinal heat of the men’s 400-meter dash.

Downing advanced to the semifinal of the intermediate hurdles with the second-fastest time of the round at 49.00, while Cherry qualified sixth overall in the 400 meters with a time of 45.05 to take the tape by just five one-thousandths of a second ahead of Bryshon Nellum with a matching time of 45.05. Former Tiger national champion Vernon Norwood was just short of joining Cherry in the 400-meter final as he ran 45.06 to finish in sixth place in the first semifinal heat and 10th place overall.

Cherry will line up in his first career USATF final on Saturday afternoon at 3:31 p.m. CT before Downing follows in the semifinals of the 400-meter hurdles at 3:55 p.m. with an eye on making his fourth-straight final.

Truly blessed made my first us final! Let’s finish the job tomorrow pic.twitter.com/rmHTQqMvzp

Former NCAA Champion Cassandra Tate looks to return to the World Championships in the women’s 400-meter hurdles after bringing back the bronze medal for Team USA in her debut in Beijing two seasons ago, and she took a step forward on Friday with a time of 55.20 for the fifth-fastest time in the preliminary round. Tate was the third-place finisher in the first qualifying heat.

LSU alumnae Charlene Lipsey closed out Friday’s qualifying on the track with an outdoor personal best of 1 minute, 59.56 seconds to earn her spot in the women’s 800-meter final as she followed Ajee’ Wilson (1:58.94) across the finish line in the first heat with the second-fastest time of the semifinals. She eclipsed her pervious outdoor PR of 1:59.57 from the Adidas Boost Boston Games held on June 2.

Tate will precede Downing in the semifinal round of the women’s 400 hurdles on Friday at 3:39 p.m. CT, while Lipsey won’t return for the women’s 800-meter final until Sunday at 4:06 p.m. on the final day of the meet.