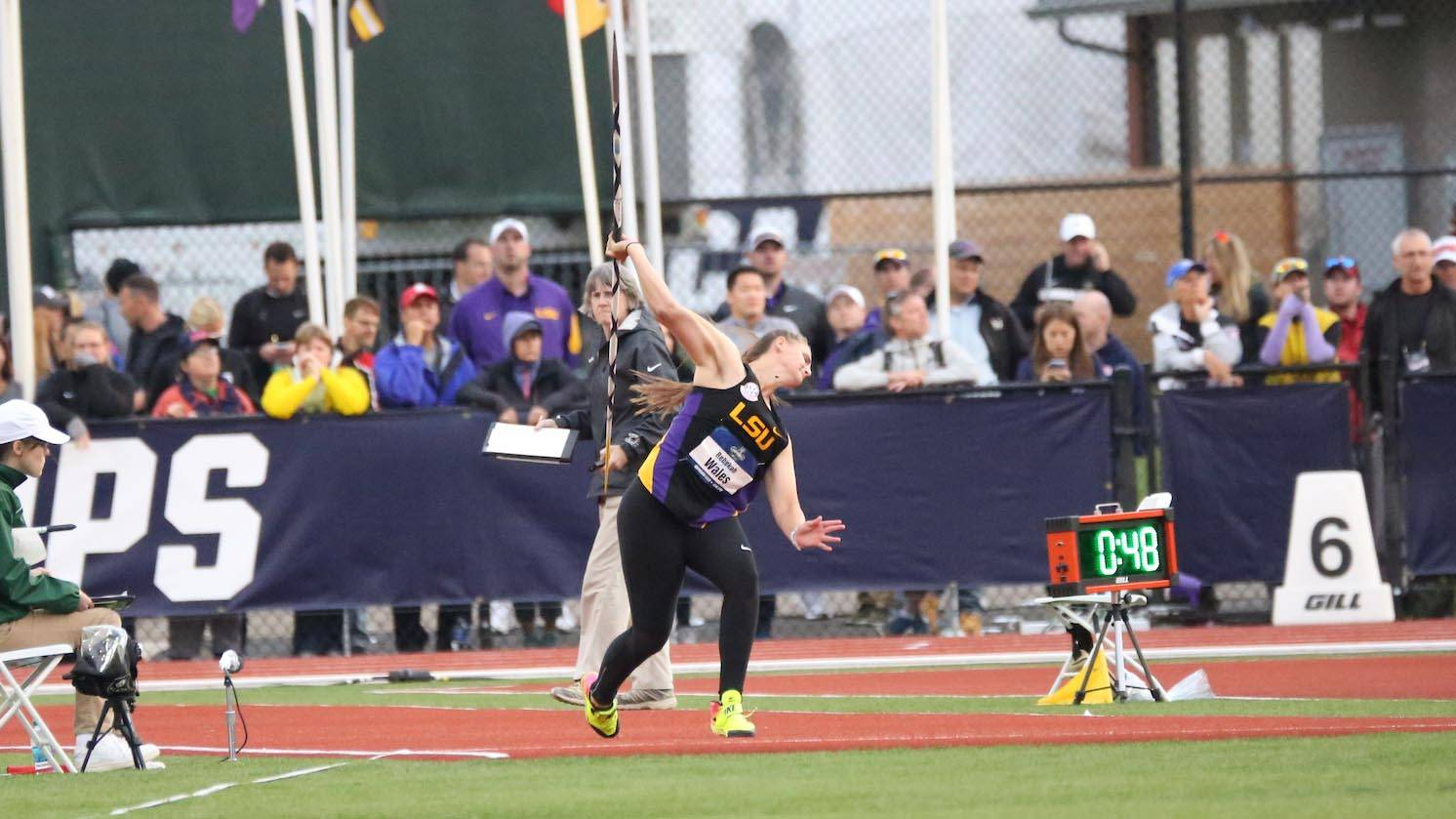 SACRAMENTO, Calif. – Senior All-Americans Johnnie Jackson and Rebekah Wales climbed the medal podium in Thursday’s opener at the 2017 USA Track & Field Championships as Jackson scored the silver medal in the men’s hammer throw and Wales won the bronze medal in the women’s javelin at Hornet Stadium.

Both returned to action Thursday after Wales placed fifth and Jackson finished sixth as All-Americans in their respective events at the NCAA Division I Outdoor Track & Field Championships two weeks ago.

Jackson was the first LSU athlete to take home hardware from this year’s USATF Championships when he threw a series-best of 235 feet, 2 inches for second place in the men’s hammer final. Jackson came up just two inches short of his personal best of 235-4 from the NCAA final to finish runner-up in the event. Southeastern Louisiana’s Alexander Young was crowned the USATF Champion with a mark of 241-11.

Wales won the second medal of the day for LSU’s throws group when she posted a best of 181-4 in the women’s javelin to emerge as the bronze medalist in the competition. She was the top collegian in the field after Kara Winger hit the qualifying standard for the World Championship with a winning 206-0 followed by Ariana Ince in second place with a throw of 191-4.

While earning top-three finishes at the USATF Championships, both Jackson and Wales remain short of the qualifying standard to join Team USA at the IAAF World Championships in Athletics in London in August. They have until the June 23 deadline to achieve the standards of 201-5 in the women’s javelin and 249-4 in the men’s hammer.

While Jackson ended his collegiate career with a personal best of 235-4 at the NCAA Championships, Wales threw her PR of 191-0 at the SEC Championships to win her second career SEC title in the javelin throw.

Thursday was also a successful day of qualifying on the track at Sacramento State’s Hornet Stadium as senior Michael Cherry and junior Aleia Hobbs joined a trio of former All-Americans and NCAA Champions in Vernon Norwood, Kimberlyn Duncan and Charlene Lipsey in advancing to USATF semifinals.

Cherry won the first preliminary heat of the men’s 400-meter dash with an time of 45.08 seconds to rank fifth overall in the opening round, while Lipsey also advanced as a heat winner in the women’s 800 meters after running 2 minutes, 3.28 seconds in the second heat to qualify 11th overall in her event. Duncan (11.03) and Hobbs (11.05) qualified automatically in the women’s 100-meter dash with top-three finishes in their respective heats, and Norwood advanced on time in the men’s 400 meters with a prelim time of 45.21.

In other action, recently-crowned NCAA Champion Mikiah Brisco ran 11.23 (+1.6) for 20th place overall in the women’s 100 meters and All-American Blair Henderson finished 26th in qualifying in the men’s 800 meters.

Friday’s action at Hornet Stadium kicks off for LSU’s athletes at 6:50 p.m. CT as former All-American Jasmin Stowers lines up in the first round of qualifying in the women’s 100-meter hurdles. Lipsey will wrap up the day by running in the semifinal round of the women’s 800 meters at 10:28 p.m. Day 2 at the USATF Championships will air live on NBC Sports Network from 9:30-11:30 p.m. CT.