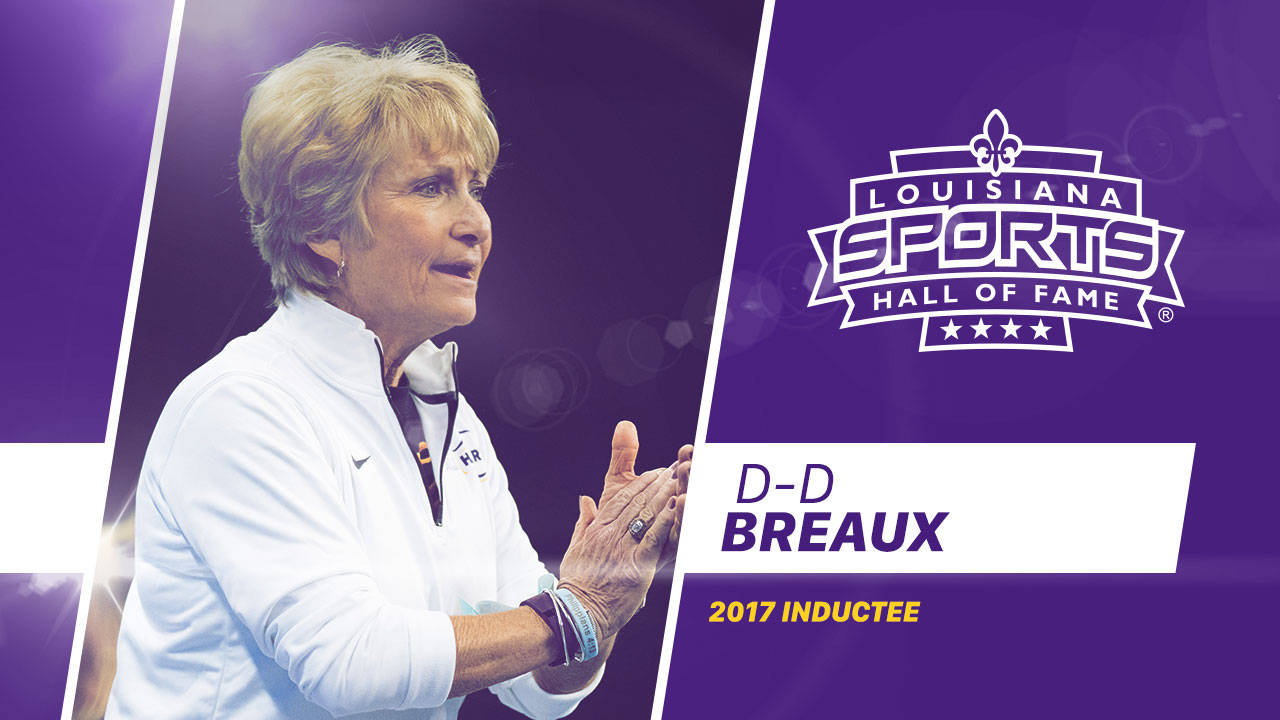 By Scott Rabalais
Written for the LSWA

(LSUsports.net Note — The induction ceremonies for the 2017 class of the Louisiana Sports Hall of Fame is set for Saturday night in Natchitoches. This year LSU is represented by four people who left or are still leaving their mark on sports at LSU and the state of Louisiana: football player Eddie Kennison, coach Ray Didier, golfer David Toms and current LSU gymnastics coach D-D Breaux. Today is the fourth of four profiles on this year’s LSU links to the Louisiana Sports Hall of Fame class. Friday Kent Lowe will have a report from Natchitoches on Hall of Fame activities.)

If she’d been born in another era, Sara “D-D” Breaux might have been on some western frontier somewhere, carving out a homestead for herself and her family where others might have said it couldn’t be done – or given up.

There have been plenty of chances for Breaux to call it quits during her long and distinguished tenure as LSU’s gymnastics coach. Instead, she just completed her 40th and most successful season and finds herself heading for enshrinement in the Louisiana Sports Hall of Fame.

Breaux and 10 other state sports greats will be inducted Saturday, June 24, highlighting three days of activities.

Her LSU team wound up the 2017 season where it was last year, as NCAA runner-up behind Oklahoma. But unlike 2016, the Tigers brought home some first-place trophies as well.

To a large degree, the success of LSU’s program is the physical manifestation of the determination of a young girl from Donaldsonville who fought her way to the top of a sport she now transcends.

“I’d put D-D in a club with the likes of (late Tennessee women’s basketball coach) Pat Summitt or (swimming coach) Jack Bauerle at Georgia,” said Jay Clark, who just completed his fifth season as LSU’s associate head coach. “He (Bauerle) started with divers jumping out of the rafters.

“She’s a pioneer, one of a group without which we wouldn’t be where we are as a sport or in women’s athletics in general.”

As for many, the competitive fire that Breaux still possesses started at an early age, in a family of eight children growing up along a bend of the Mississippi River.

“You’ve got to compete for the carrots in the stew or you get the potatoes,” Breaux said. “But my family has always been extremely supportive.”

Sometimes her competitive streak ran to excess. Once when she was a teenager, camping with a friend on a sandbar in the Mississippi River near Houmas House in Darrow, they decided to swim across. The river’s treacherous current carried them almost two miles downstream before they reached the other side.

“We get out there and see the ships coming,” Breaux recalled.

“I look at that river and I still think, ‘You’re still nuts, girl,’ ” said Janey Nasca, one of Breaux’s seven siblings and closest friends. “But it’s a true testimony that there’s no obstacle if she sets her mind to it. She’s been very tenacious since she was a youngster.”

Even getting the training to becoming a competitive gymnast was an obstacle for Breaux to overcome.

“There were no sports for girls at Donaldsonville High School,” Breaux said. “Nothing. But my parents recognized I was passionate about gymnastics.”

Despite having so many other children, Breaux’s mother would drive her three or four days a week to train in Baton Rouge, often in the days before the I-10 bridge was built in the late 1960s.

“A lot of people made huge contributions for me to be where I am,” Breaux said.

A talented gymnast, Breaux competed for Southeastern Louisiana in 1972-73, helping the Lions to a runner-up finish in the 1972 AIAW championships, a forerunner of NCAA women’s athletics. She was set to take part in the 1972 Olympic trials but a knee injury spelled the end of her competitive career – and started her on the path to coaching. Joan Moore, mother of now former LSU gymnast Ashleigh Gnat and a frequent competitor of Breaux’s, did make the U.S. team.

“That was devastating but it wasn’t a detriment,” Nasca said. “She allowed it to propel her forward. She got more tenacious.”

Breaux was an assistant coach at SLU for three years before transferring to LSU where she earned bachelor’s and master’s degrees. In 1978, she became the gymnastics coach at LSU – not that there was much of a program to run.

“When I first got here they wanted me to continue to practice in the Gym-Armory,” said Breaux. “Or they wanted us in the Huey Long gym.”

Soon the women’s program was carving out a toehold in the Carl Maddox Field House.

“We were in a corner,” she said. “There was intramural basketball in there and football would practice there during inclement weather. We had this cordoned off area for our equipment, and when there was an event in there they’d break it down and move it away.”

Legendary LSU football coach Paul Dietzel, who led the Tigers to the 1958 national championship, returned as athletic director 20 years later. Dietzel once called for Breaux to come to his office in Tiger Stadium for a meeting, but fearing he would tell her he was dropping the program, she didn’t go.

Eventually, Breaux said Dietzel had all of women’s gymnastics’ equipment dismantled and piled in a room with that of the men’s program. He then called a meeting with Breaux and men’s gymnastics coach Armando Vega.

“He called us over and said, ‘You won that battle. You can fight it out,’ ” Breaux recalled. “Then Paul looked at Armando and said, ‘My money’s on her.’ “

Men’s gymnastics was eliminated at LSU in 1984 under Dietzel’s successor, Bob Brodhead, who was succeeded by former LSU basketball great Joe Dean.

Breaux can still count the length of time Dean was athletic director: 14 years, six months and three days. She the mindset toward her program didn’t change until Skip Bertman became athletic director in 2001.

“It became a much more uplifting environment,” she said. “It was like, ‘Here are the tools, now go.’ You’ve got to have the tools: a recruiting budget, facilities, a staff.”

When current athletic director Joe Alleva arrived in 2008, Breaux told him of her vision to build a world-class gymnastics training facility.

“When I first met D-D I was so impressed with her passion and love of LSU,” Alleva said. “She’s created a program of excellence, and is a great representative of our university.”

Breaux spent years raising millions in private donations, visiting practice facilities across the country to figure out what she wanted to include at LSU and what she didn’t. The facility finally opened in early 2016, with Gov. John Bel Edwards attending the ribbon cutting.

Soon after, legendary U.S. Olympic gymnast Bart Conner visited while covering a meet at LSU. After having a look around at Breaux’s vision made real in brick and glass and steel, Conner declared the facility the best in the world.

The building likely wouldn’t exist as it does without Breaux’s energy behind it.

“You can’t say what would have happened if someone else was the coach,” said Sara Dickson, Breaux’s namesake and one of her two daughters (Jewel is the other). “But it wouldn’t be as awesome if it wasn’t for her. You’re looking at 40 years of patiently waiting – well, sometimes patiently. Her wisdom tamed her need to fight over time and saw it through and is testament to that amazing training facility.”

There have been nearly 170 gymnastics letterwinners at LSU, women who have gone on to careers and become mothers and even grandmothers by now. Breaux tries to keep in touch with as many as she can. Her Christmas card list runs to eight pages.

Daughter Jewel has given Breaux two grandsons, Porter and Chase. They call her not D-D but “Doo-dah.” Breaux’s gymnasts have taken to calling her that, too.

Breaux now coaches in an era when the struggles of Title IX and the embryonic AIAW days of women’s college athletics have been relegated far into the dusty past. Having outlasted all the challengers, she plans on coaching a 41st season in 2018.

Assuming she does, Breaux will tie legendary Kentucky basketball coach Adolph Rupp as the longest-tenured coaches in SEC history regardless of sport.

Instead of Breaux and her gymnasts having to stand in front of grocery stores giving away tickets, LSU now has nearly 5,000 season ticket holders. Instead of driving through the night to meets in cramped vans, LSU and other gymnastics teams often fly chartered planes or take motor coaches. Their training table, practice facilities and travel accommodations are top notch.

People like Dickson, who played soccer for LSU and once served as her mother’s director of operations, want to make sure modern women’s athletes remember they stand on the shoulders of giants.

“That’s a passion of mine,” Dickson said, “This group of girls, they know. They don’t know everything, but they have an understanding.”

“Actually I think her fire has been more ignited,” Nasca said.

“I’m driven,” Breaux said. “I want to win a national championship. But you can’t get caught up in that. That will eat you alive. You have to stay in the process. Let’s stay excellent in the process.”

In that pursuit, Breaux has already succeeded. And she has long since imprinted her name indelibly on the annals of Louisiana athletics.

A star who doesn’t show any signs of fading out just yet.