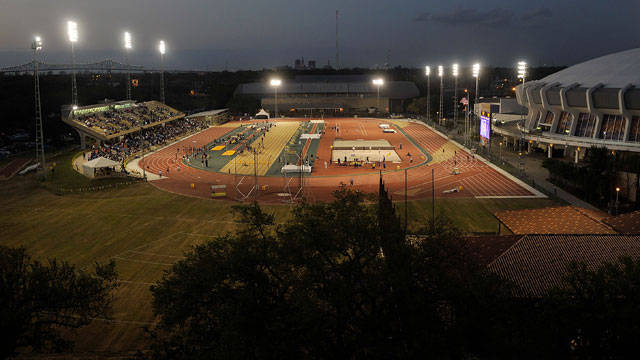 BATON ROUGE – The LSU Track & Field program has added two more signees to its Class of 2017 on the men’s side as sprinter Jahnoy Thompson of White Hill District, Jamaica, and jumps prospect JuVaughn Blake of Huntsville, Alabama, are the latest recruits to sign their National Letters of Intent ahead of the fall semester.

Thompson is set to transfer to LSU following two seasons at Southern-New Orleans where he proved to be one of the top sprinters competing in the National Association of Intercollegiate Athletics. Blake signs as one of the top high jump prospects at the prep level in the United States in the Class of 2017.

Thompson, who originally hails from White Hill District, Jamaica, has shown steady progress in his performances since joining the SUNO program as he has slashed his personal-best times in both the 200 meters and 400 meters by about a half-second year-to-year from 2015 to 2016 and also from 2016 to 2017. He will arrive at LSU with lifetime bests of 20.90 seconds and 46.97, respectively.

Thompson was crowned the NAIA Indoor Champion in both the 200 meters and 400 meters as a sophomore in 2017 before also anchoring SUNO to the NAIA Outdoor crown in the 4×400-meter relay.

An NAIA Outdoor finalist in both of his individual events this spring, Thompson clocked his wind-legal PR of 20.90 (+0.1) in the preliminary round of the 200-meter dash at the NAIA Outdoor Championships. He posted a lifetime best of 46.97 in the 400 meters in a runner-up finish in the event at the Southern Miss Invitational held April 1 in Hattiesburg, Mississippi.

Blake has certainly proven himself among the top jumpers in the U.S. high school ranks in 2017 while clearing seven feet in the high jump on four separate occasions during his senior season. He reached that height for the first time in March when he was crowned the New Balance Indoor Nationals Silver Medalist in the high jump with an indoor personal best of 7 feet, 0 ¼ inches at The Armory in New York. That mark tied him for the nation’s No. 1 ranking in the event among high school seniors and No. 2 among all classifications for the 2017 indoor season.

Blake followed outdoors by clearing the seven-foot mark three more times with heights of 7-0 at the Metro High School Track & Field Championships, 7-1 at the James Clemens Invitational and his lifetime best of 7-2 at the Huntsville City Championships while competing for Columbia High School. He is tied as the No. 3-ranked high jumper nationally among all high school classes this outdoor season.

He captured his first career outdoor state titles in the high jump (6-10) and long jump (23-0 ½) in his final state meet, while also sweeping hurdle titles in the 110-meter hurdles (14.55) and 300-meter hurdles (37.63) as the star of the meet. For his performance, Blake was recently honored as the AL.com Huntsville Region Boys Athlete of the Year and Huntsville Metro Coaches Association Track & Field Athlete of the Year.