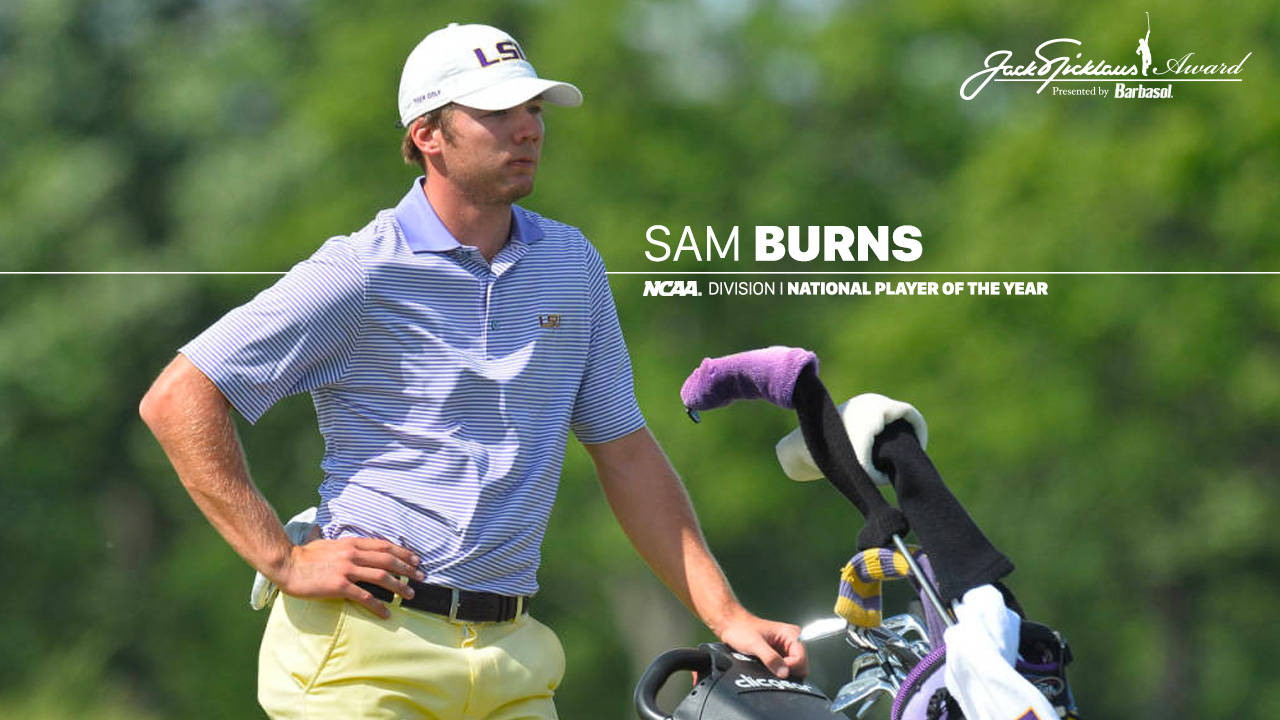 BATON ROUGE – LSU sophomore Sam Burns solidified his status as the top player in college golf for the 2016-17 season on Thursday afternoon when he was announced the recipient of the 2017 NCAA Division I Jack Nicklaus National Player of the Year Award presented by Barbasol in conjunction with The Memorial Tournament.

Thursday’s announcement comes just two days after Burns was also named among the 10 PING First-Team All-Americans for the 2016-17 season on Tuesday by the Golf Coaches Association of America.

Burns was selected the winner among five finalists that also included Oregon’s Wyndham Clark, Vanderbilt’s Patrick Martin, Stanford’s Maverick McNealy and Wake Forest’s Will Zalatoris. He will be presented with the award from Jack Nicklaus himself on Sunday in a special ceremony at Muirfield Village Golf Club as part of the final round of The Memorial Tournament presented by Nationwide.

All five finalists for the NCAA Division I Jack Nicklaus National Player of the Year Award are also set to compete in the Barbasol Shootout for an exemption to the PGA TOUR’s Barbasol Championship set for July 20-23 on Robert Trent Jones Golf Trail’s Grand National in Opelika, Alabama. The Barbasol Shootout will be contested Saturday, June 3, at Scioto Country Club in Columbus, Ohio, where Nicklaus first learned the game of golf as a boy before becoming one of the all-time greats of the game.

With his selection Thursday, Burns becomes the first LSU Tiger in history to be honored as the National Player of the Year in college golf while he is the program’s 11th First-Team All-American for his performance.

The GCAA announced Burns among the five finalists for the 2017 NCAA Division I Jack Nicklaus National Player of the Year Award presented by Barbasol one week ago on the eve of the 2017 NCAA Division I Men’s Golf Championships held at Rich Harvest Farms Golf Club in Sugar Grove, Illinois. That’s where LSU earned a fourth-straight top-10 finish at the NCAA Championships with a ninth-place performance.

“This is a special award with it being named after Mr. Nicklaus. He shaped golf into what it is today and has been an inspiration to many young golfers like myself,” Burns said of the award’s namesake. “I am thankful for LSU to give me this opportunity to be able to compete and have a chance at awards like these. This wouldn’t have been possible without my teammates, and much of the credit is due to them.

“They pushed me to get better and challenged me to always be my best. I wish the best for every single one of them next season and in the years to come, and I will always be rooting on the Tigers.”

“In a record-breaking season Sam set a new bar of excellence with his consistent and dominant play throughout a long, nine-month season,” said LSU head coach Chuck Winstead. “We are proud of Sam and appreciate his contributions to LSU as a player and, most importantly, as a person. He is most deserving of this prestigious award recognizing college golf’s best player. “