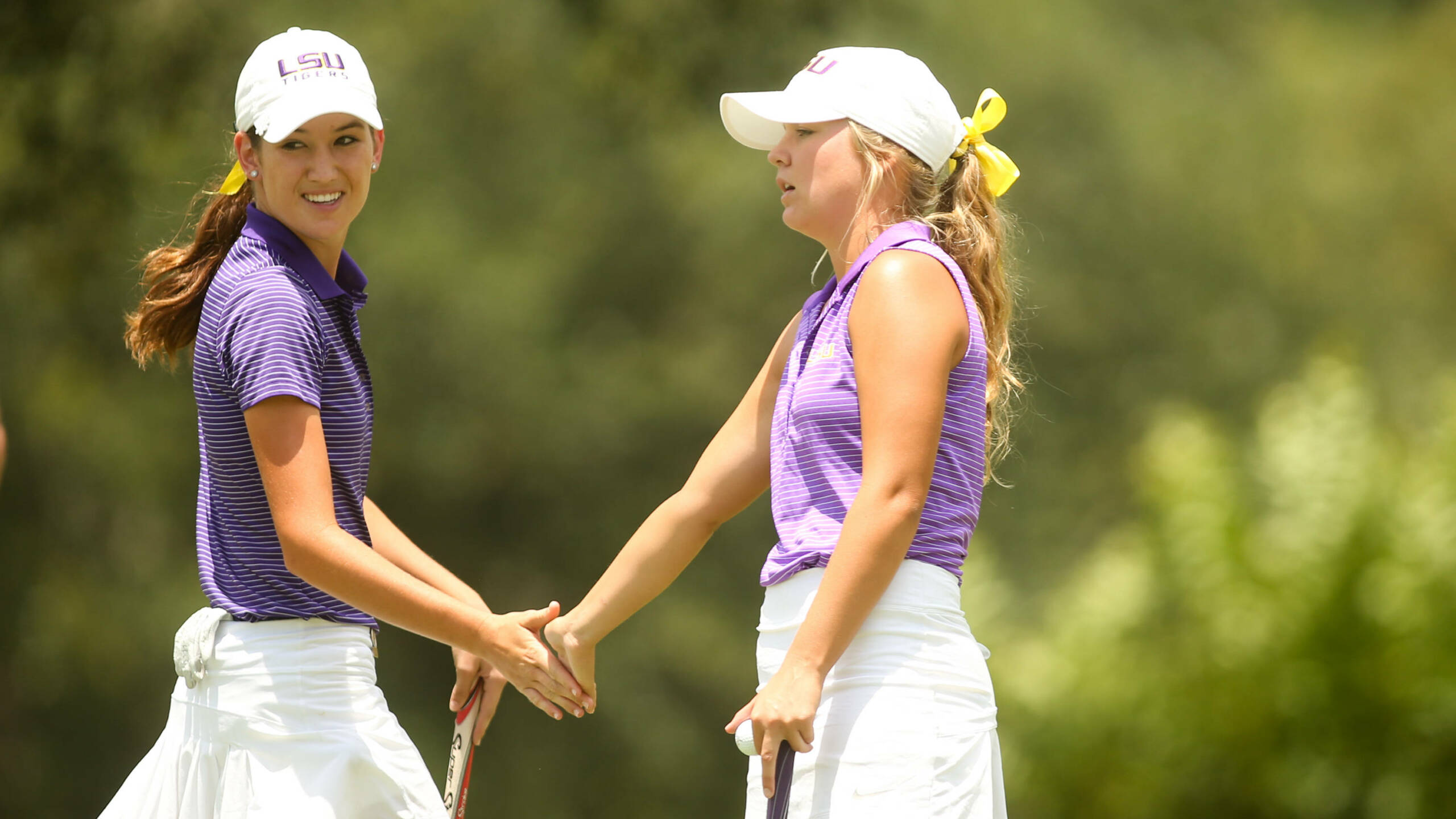 MYRTLE BEACH, South Carolina – It was a magical week for one of the bright lights of the LSU women’s golf program and for an incoming signee who will start her LSU career this fall.

And it all happened in a USGA event, the third annual United States Women’s Amateur Four-Ball competition at the Dunes Golf and Beach Club in Myrtle Beach.

The USGA web site was noticing and wrote about Gallagher and her golfing family legacy and thanks to the USGA, here is a portion of that story:

… “But no player in the championship has a better golf pedigree than Kathleen Gallagher, 20, of Greenwood, Miss., whose parents are five-time PGA Tour champion Jim Gallagher, Jr. and 12-time Mississippi State Women’s Amateur champion Cissye Gallagher.

On Tuesday, Gallagher and her partner, Kendall Griffin, 18, of Sebring, Fla., took down defending champs Hailee Cooper and Kaitlyn Papp, 2 and 1, in the Round of 16 and then defeated Linyu (Anna) Dong and Rose Zhang, 4 and 2, in the quarterfinals.

Gallagher and Griffin would fall in the Wednesday semifinals, 2 and 1, to Sammi Lee and Mary Ellen Shuman.

“She’s such a good driver of the ball, she goes first and hits it every time down the middle,” said Griffin, who will join Gallagher at LSU in the fall. “It gives me a little bit less pressure. She’s great in every part of the game, so it’s definitely good to have a partner like that.”

Added Cissye, who has followed her every step of the way this week and has played in more than a dozen USGA championships: “I’m so happy for her. I would be so thrilled if she were to bring home a USGA championship, but it’s been a great week just getting to know Kendall.”

Kathleen’s previous biggest wins to date would be the 2013 and 2016 Mississippi State Women’s Amateur titles. In 2015, Cissye beat Kathleen on the 18th hole in the second round before going on to claim her 12th title and first since 2006. Eldest daughter, Mary Langdon, won the event in 2010 and 2014 and has also had to play Cissye.

“After Kathleen lost, she grabbed me by the arm and said, ‘You better play as good against everybody else as you just played against me,’” recalled Cissye, who played at LSU with Jim’s sister Jackie. “It is hard to play your daughter, but it’s harder for them to play me because I can’t lose. I’m thrilled to death either way.”

Before the age of 10, Kathleen would travel with the family to 20 to 25 PGA Tour events a year before Jim started winding down his career. One of her fondest memories is celebrating her birthday each year during the Milwaukee Open. On her eighth birthday, her dad and other pros were getting to take batting practice with the Brewers before a game when a giant “Happy Birthday, Kathleen” popped up on the Jumbotron.

“That’s probably what I remember most – those birthdays on the road,” said Kathleen, who would like to turn pro after college, too. “I definitely want to try it out, but I don’t think I will do it too long. I think just depends on how things go. If it doesn’t work out, it’s OK.”

But for now, she’ll remain an amateur and is elated that she and Griffin are exempt now into next year’s Women’s Four-Ball at El Caballero Country Club in Tarzana, Calif.

No matter what happens today, she’s added another impressive entry into the Gallagher golf record book.

For fans of LSU women’s golf, the excitement of seeing Kathleen and Kendall on the course together come the 2017-18 season is going to be eagerly anticipated.