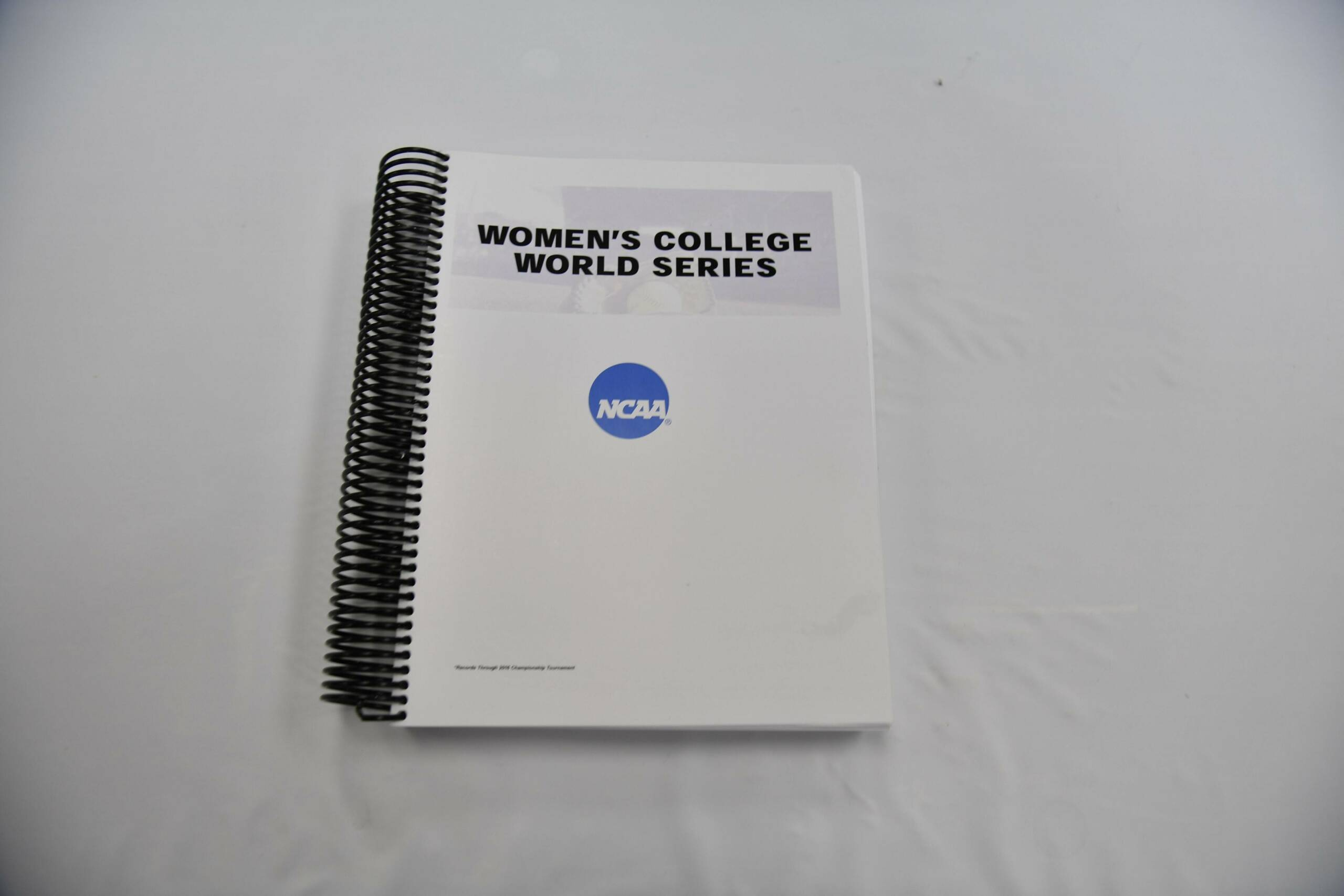 OKLAHOMA CITY, Oklahoma – I’m almost embarrassed to say it took two hands for me to lift the Women’s College World Series Tournament Record Book out of the box in the press conference room here Wednesday.

It’s pictured above. All 435 pages. Everything you would want to know about the history of the Women’s College World Series but were afraid to ask? More on that later.

The Tiger softball team is less than 24 hours away from the start of a third straight run here at ASA Hall of Fame Stadium-OGE Energy Field. It all goes down at 1:30 p.m. when the Tigers take on UCLA (ESPN, LSU Sports Radio Network).

This is my first trip to the stadium since 2004, the year one Kristin Schmidt threw 360-plus pitches over three games as LSU was so close to getting to what was then a one-game championship. I argued that weekend and I argue to this day that LSU was at a distinct disadvantage because of the weather and having to play three games in a day “to protect the bracket” I was told by an administrator and an NCAA rep. That was ridiculous.

That’s why Schmidt’s performance was so epic. It’s why she was voted MOP the next day in the voting even after the LSU team and all the possible LSU voting media departed.

I remember this being a much smaller stadium with hillside berms where people sat. Less seats in the outfield and a special charm to this place.

Okay, I’ll give them the OGE Energy Field because maybe there is some monetary value for the Softball Hall of Fame, but thank goodness the vibe is still here. This is the Women’s College World Series I remember. This isn’t the over commercialized event similar NCAA events have become. And, thank goodness, no need for a new downtown stadium to play this tournament. It’s still the same place, the same venue – yea, more people, but with the same Midwestern grace.

It’s funny to remember that in 2004, LSU’s if necessary game with California was bumped to a channel people didn’t find as easily (ESPN2) because of Sunday Night Baseball. Of course that meant Patrick Wright had a much larger captive radio audience. Now ESPN and its family of networks will have 20 cameras around the stadium (including ump cam) and the team and Coach Beth Torina spent the better part of an hour with videographers, photographers and the large crew of outstanding talent that will call this event from the network.

Adam Amin, Amanda Scarborough and Laura Rutledge will have the LSU game and the day session, but the band is back together again as Jessica Mendoza will step back into the booth with Beth Mowins and Michelle Smith with Holly Rowe on the sidelines. They take this event seriously and they are like all the coaches and players. They want to tell the stories that will continue to help grow the game.

Now back to that book. I tried this little trivia nugget on Mr. Wright earlier Wednesday and I had to drop a few hints for him so let’s try this on you – LSU has had four players make the WCWS All-Tournament team. Can you name them? The answer at the end of the column.

I always find this stat and wonder what that game must have been like to watch. It must have been the era when pitching was the only thing that mattered with softball as Texas A&M and Cal Poly Pomona played scoreless ball for 24 innings before A&M scored a run in the 25th to win 1-0 in 1984. We think eight inning games sometimes are tough enough, imagine 25 innings.

Do you realize the WCWS actually started in 1982 in of all places, Omaha? The first six years were played there before a two-year stint at Sunnyvale, California. In 1990 the event moved to OKC and the marriage is a happily ever after thing. Last year over 78,000 fans attended the event.

Back to the all-tournament teams. Here’s the answer – 4 Tigers made all-tournament – pitcher Britni Sneed and third baseman Julie Wiese in 2001 and MOP pitcher Kristin Schmidt and right fielder Camille Harris in 2004. Is there an all-tournament candidate in 2017? We’ll see starting a little after 1:30 p.m. Thursday.