A Legendary Week For The Purple & Gold 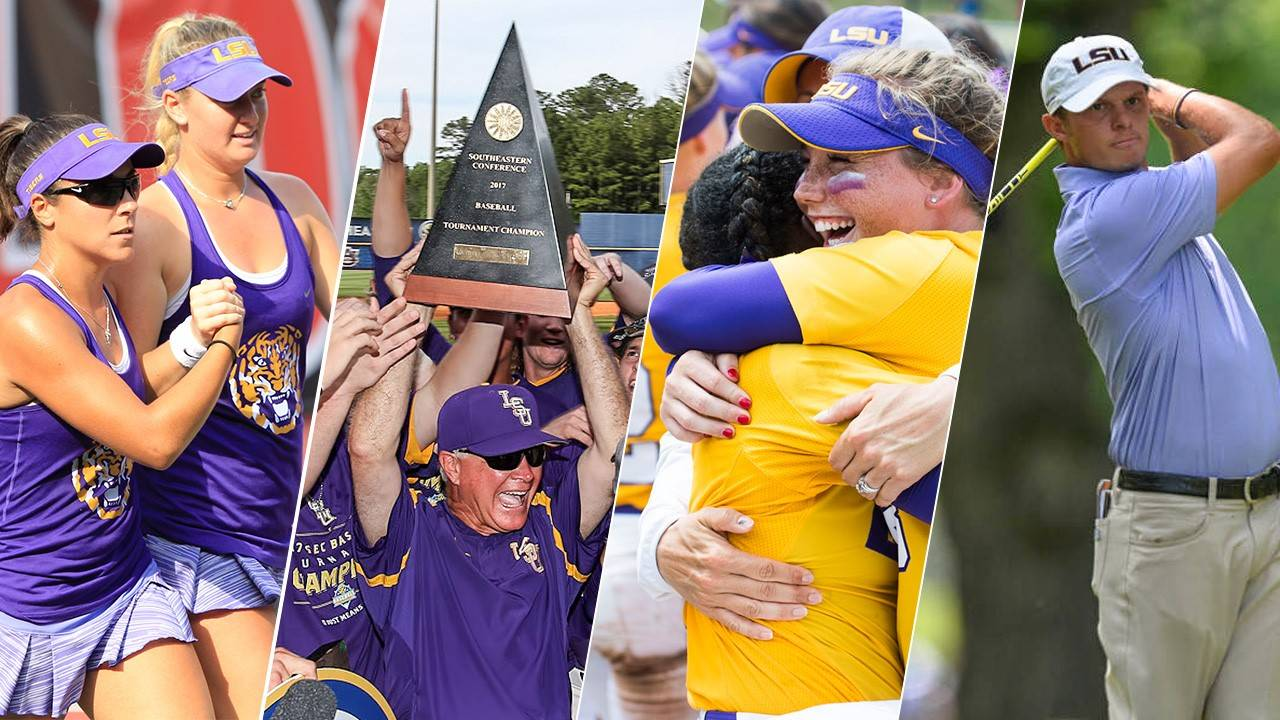 It isn’t often one athletic program produces conference championships and multiple postseason berths in both men’s and women’s sports in just a handful of days. Enter the second-to-last week of May. Enter the LSU Tigers.

LSU softball earned its third-straight invitation to the NCAA Women’s College World Series. LSU baseball won the SEC Tournament for the 12th time, netted a national seed and will play host to the NCAA Baton Rouge Regional. LSU Men’s Golf finished in ninth place at the NCAA Championships. A pair of Tigers advanced to the semifinal round of the NCAA Division I Women’s Doubles Tennis Championship. And, LSU Track & Field will power into the NCAA Outdoor Championships with 27 semifinalists, including 19 qualifiers for the Tigers and eight qualifiers for the Lady Tigers.

All of that in one week. Much of it, over the weekend.

“That was great to watch,” said LSU Vice Chancellor and Director of Athletics Joe Alleva. “You don’t usually get to have too many weekends like that. Our fans, all of us, got a rare treat for sure.”

Memorial Day weekend 2017 was a blur of purple and gold on social media as well. LSU fans who follow the school’s various athletic programs on Facebook and Twitter likely had their timelines full of LSU updates and breaking news all weekend long.

“Our social media channels on Twitter and Facebook were on overdrive all weekend,” said LSU Deputy Athletics Director Eddie Nunez. “I don’t know how many congratulatory posts went out over the weekend, but it has to be close to a record.”

Though earlier in the month, Alleva added the success of beach volleyball as another source of pride for LSU fans. In just its fourth season, the team rattled off 23-straight wins during the season and earned a selection to the NCAA championships.

The fun has only just begun for Tiger fans as baseball, softball and track and field all are in contention for NCAA championships.

LSU softball will get things started at the Women’s College World Series at 1:30 pm Thursday in Oklahoma City against UCLA. The game will be broadcast on ESPN.

LSU baseball will begin their NCAA regional at 2:30 pm on Friday at Alex Box stadium against Texas Southern. The game will be live on the SEC Network and WatchESPN app.

LSU Track and Field athletes will begin their semifinal and final rounds of the 2017 NCAA Division I Outdoor Track & Field Championships June 7 at Oregon’s Hayward Field.

“Our student athletes and coaches are on a roll right now and we’re enjoying every minute of it,” said Alleva. “I know our fans are too. Geaux Tigers!”