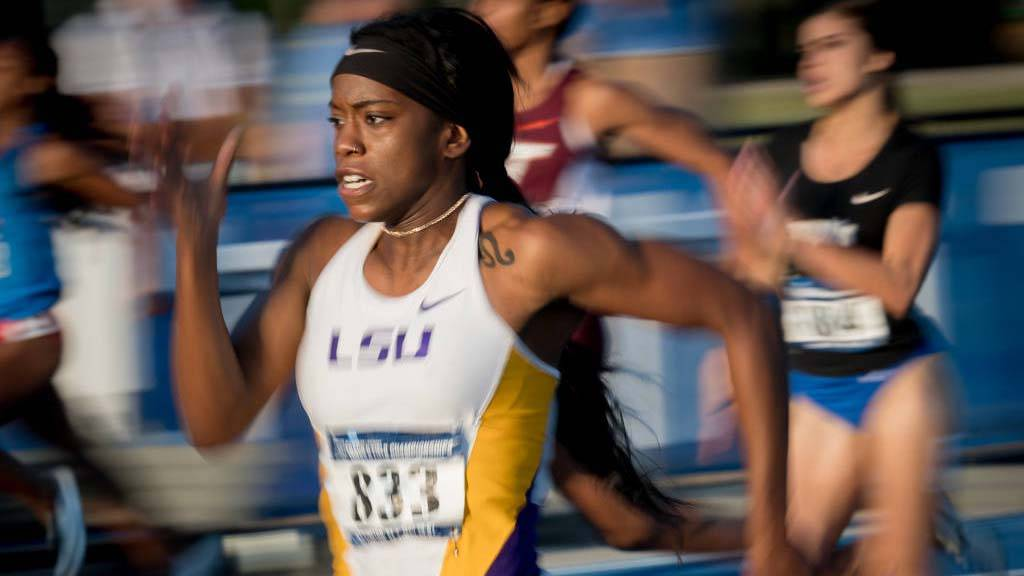 LEXINGTON, Ky. – LSU’s roster of semifinalists heading to the 2017 NCAA Division I Outdoor Track & Field Championships is now set as the Tigers and Lady Tigers added 12 more qualifiers to their squads making the trip to Eugene, Oregon, during Saturday’s finale at the NCAA East Preliminary Rounds at the UK Track & Field Complex.

They have now earned the right to represent the program in the semifinal and final rounds of the 2017 NCAA Division I Outdoor Track & Field Championships that will be held June 7-10 at Oregon’s Hayward Field.

“Our athletes really did their job and gave a great effort this weekend to put themselves in a great position to compete when we go to Eugene in a couple of weeks,” said LSU head coach Dennis Shaver. “We have two very strong teams heading to Eugene, so the next couple of weeks will be important for us in our preparation for what’s to come. We’re looking forward to another NCAA Championship.”

After an hour weather delay to the evening’s events, the Lady Tigers’ collegiate-record 4×100-meter relay team stepped onto the track for the first quarterfinal heat and stormed to a facility record of 42.32 seconds for the top time between both the NCAA East and NCAA West preliminary rounds. Clemson was runner-up in the heat in 43.31, while Kentucky won the second heat with the second-fastest time overall at 42.79.

LSU’s team of junior Mikiah Brisco, sophomore Kortnei Johnson, senior Jada Martin and junior Aleia Hobbs secured their trip to Eugene to defend their NCAA title in the event they captured last season with a Hayward Field stadium record of 42.65. The Lady Tigers are 14-time NCAA Champions in the event in their history.

The Tigers followed with a heat-winning race of their own in the first heat of the men’s 4×100-meter relay when freshman Rayvon Grey, senior Nethaneel Mitchell-Blake, senior Tinashe Mutanga and sophomore Jaron Flournoy teamed for a time of 38.75 to edge North Carolina A&T’s 38.76 at the finish line. LSU’s time was the second-fastest among the three heats as Auburn’s 38.74 led the second heat.

The Tigers are defending NCAA Champions in their own right after winning their ninth crown in the men’s sprint relay in team history with a Hayward Field record of their own at 38.42 to close their 2016 season.

What a race! Watch Rayvon Grey, @WurldOfBlake, Tinashe Mutanga & @LSUFlow win the 1st heat of the men’s 4×1 in 38.75! #LSU pic.twitter.com/oioTVPdtAg

Four members of LSU’s advancing sprint relay teams later qualified from the 200-meter quarterfinals as Mitchell-Blake and Johnson both moved to the NCAA semifinals in their second individual event on the weekend while Flournoy and Martin advanced individually for the first time.

Martin and Johnson crossed the finish line with matching times of 22.80 to finish runner-up in their respective quarterfinal heats as Martin qualified with the fourth-fastest time of the day followed by Johnson with the fifth-fastest time of the round. Johnson already qualified for the NCAA semifinals in the 100-meter dash with her performance in Friday’s quarterfinals.

Jada Martin followed with a runner-up finish in the 2nd quarterfinal heat as she matched Johnson with a 22.80. Watch it👇! @Jada_MAC pic.twitter.com/6vMeUn5fSw

In the men’s 200 meters, Mitchell-Blake ran a winning seasonal best of 20.04 (-0.4) in the second heat for the third-fastest time among advancing semifinalists. Flournoy opened the men’s quarterfinals by clocking a big wind-legal personal best of 20.24 (-0.5) for second place to Tennessee’s Christian Coleman (19.85) in the first heat with the fifth-fastest time of the round. Flournoy smashed his previous PR of 20.56 by more than three tenths of a second to become the No. 8-ranked 200-meter sprinter in school history.

Just missing out on qualification in the 200-meter dash were senior Tinashe Mutanga and freshman Cassondra Hall as Mutanga ran a seasonal best of 20.53 (-0.5) for 14th overall in the men’s quarterfinals and Hall ran an effort of 23.13 (+1.2) for 13th place in the women’s event as the fastest non-qualifier on the night. Hall did advance to the semifinals in the 100 meters on Friday afternoon.

The Lady Tigers also saw two freshmen hurdlers punch their ticket to Eugene for the NCAA semifinals for the first time as Tonea Marshall and Brittley Humphrey both turned in seasonal bests in Saturday’s quarterfinals closing out the NCAA East Preliminary Rounds. Marshall was an automatic qualifier as the runner-up in the second heat as she crossed the finish line in 13.14 (+0.2) to advance fifth overall. Humphrey followed by taking fifth in the third heat with her fastest hurdle race of 2017 in 13.25 (+0.2) to advance on time in the 11th position overall.

While not advancing to the semifinal round in the event, junior Danielle Phillips ran the fastest hurdle race of her career when she clocked a personal best of 13.32 (+0.2) in the second heat for 14th place overall.

Senior Nataliyah Friar became the third LSU athlete of the weekend to earn her ticket to Eugene in two individual events when she grabbed the 12th and final qualifying spot in the women’s triple jump with a best at 42 feet, 7 inches (+0.0) on her second attempt. Friar added a qualifying performance in the triple jump after advancing in the long jump in Thursday’s opener at the UK Track & Field Complex.

Freshman Nickolette Dunbar is set to make her NCAA semifinals debut after uncorking an outdoor personal best of 53-11 on her second throw in the women’s shot put to place 10th in the field of 48 putters.

Senior Johnnie Jackson and sophomore Da’Quan Bellard did not advance in Saturday’s field events with a pair of 33rd-place finishes as Jackson threw 173-0 in the men’s discus and Bellard posted a wind-legal 49-1 (+1.5) in the men’s triple jump. Jackson was an easy qualifier in the men’s hammer throw on Thursday as he placed fifth in the event with a mark of 226-5.

LSU closed strong at this year’s NCAA East Preliminary Rounds with a pair of qualifying efforts in the 4×400-meter relay as the women were the top qualifiers in their second relay event of the day and the Tigers moved on with the fifth-fastest time on the men’s side.

Sophomore Rachel Misher, who qualified for the women’s 400-meter semifinals on Friday with a personal-best time of 52.07, gave the Lady Tigers a brilliant leadoff leg in the first quarterfinal heat as they never looked back en route to victory. Martin handed off to junior Kymber Payne at the second exchange as Payne extended their lead with a 52.57 carry. Senior Travia Jones then anchored in 51.82 for the fastest time of the round with a seasonal best of 3 minutes, 29.11 seconds. Miami was runner-up in the heat with the second-best time overall at 3:30.47.

The Tigers closed out the quarterfinals with a qualifying performance in the men’s 4×400-meter relay as senior LaMar Bruton, Flournoy, senior Blair Henderson and senior Michael Cherry finished runner-up on the third heat with the fifth-fastest time of the day at 3:03.55. Cherry nearly caught Ohio State’s anchor leg at the finish line with a 43.61-second split as the Buckeyes edged it at 3:03.51.