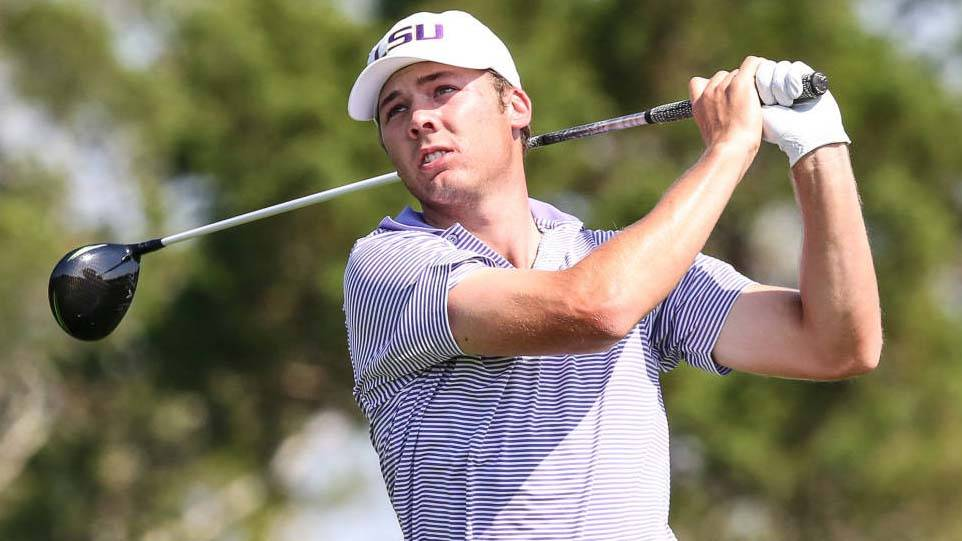 BATON ROUGE – On the eve of the 2017 NCAA Division I Men’s Golf Championships, LSU’s sophomore All-American Sam Burns was named by the Golf Coaches Association of America among the five finalists for the this year’s NCAA Division I Jack Nicklaus National Player of the Year Award presented by Barbasol.

The winner will be announced June 1 immediately following the NCAA Championship with Nicklaus himself presenting the award in a special ceremony at Muirfield Village Golf Club with the final round of the Memorial Tournament presented by Nationwide. All five finalists are also set to compete in the Barbasol Shootout for an exemption to the PGA TOUR’s Barbasol Championship set for July 20-23 on Robert Trent Jones Golf Trail’s Grand National in Opelika, Alabama.

The Barbasol Shootout is scheduled for Saturday, June 3, at the Scioto Country Club in Columbia, Ohio, where Nicklaus first learned the game of golf as a boy before becoming one of the all-time greats of the game.

Burns arrives at Rich Harvest Farms Golf Club for the 2017 NCAA Division I Men’s Golf Championships as the No. 1-ranked player in college golf in the latest Golfstat individual rankings. He helped lead the Tigers to their first ever regional title last week as medalist of the NCAA Baton Rouge Regional where he edged Oregon’s No. 2-ranked Wyndham Clark by a single shot for his fourth tournament title of the season.

Also the champion of the David Toms Intercollegiate, Sun Bowl Western Refining College All-America Golf Classic and Louisiana Classics this season, Burns was recently honored by the head coaches in the Southeastern Conference as the 2017 SEC Player of the Year and a First-Team All-SEC performer.

Burns, who was recently named to Team USA’s Arnold Palmer Cup squad this summer, has cracked the Top 10 in each of his 14 appearances this season and continues to lead the team with a 69.77 scoring average in his 39 competitive rounds for the year. As a sophomore, Burns is on pace to take down his 72.42 scoring average as a freshman in 2015-16 and Pierce’s single-season scoring record for the Tigers of 71.16 set during their the 2014-15 campaign.