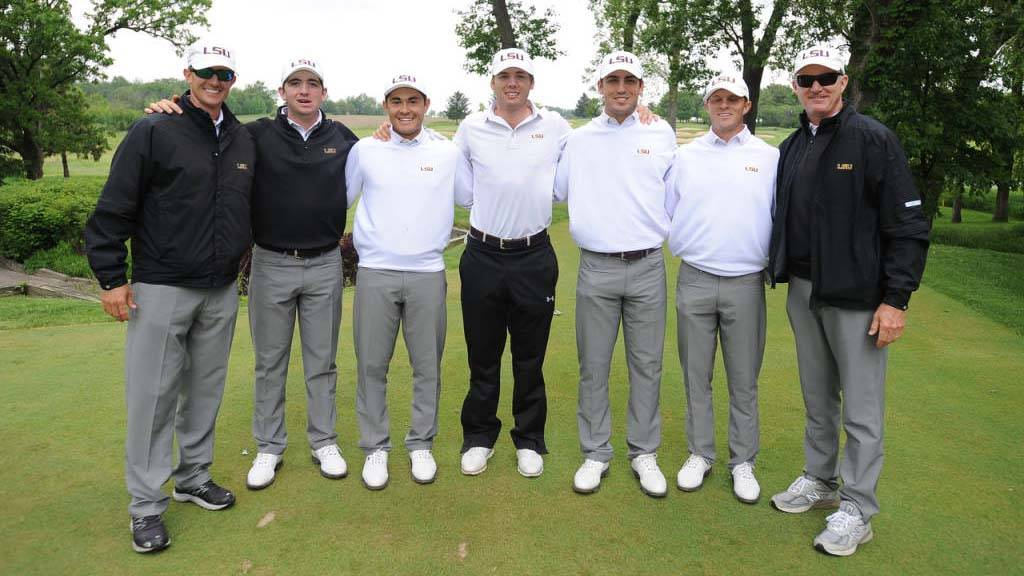 SUGAR GROVE, Ill. – Fresh off their historic victory at the NCAA Baton Rouge Regional a week ago, the No. 2-ranked LSU Tigers will begin their march toward a national championship Friday as the 2017 NCAA Division I Men’s Golf Championships open with the first round of stroke play at Rich Harvest Farms Golf Club.

The Tigers captured their first ever NCAA Regional title on their home course at the University Club to earn their fifth-straight trip to the NCAA Championships since 2013 and their 38th appearance all-time.

LSU’s victory at the NCAA Baton Rouge Regional was its sixth tournament championship of the 2016-17 season as the team set a new school record for wins in a season. That performance moved the Tigers to the No. 2 spot in the latest Golfweek/Sagarin Performance Index heading into the NCAA Championships at Rich Harvest Farms Golf Club this week.

As the No. 6-ranked team nationally in the Golfstat power rankings following regional play, the Tigers will play as the No. 6 seed in the field of 30 teams at the 2017 NCAA Division I Men’s Golf Championships.

Rich Harvest Farms Golf Club will play to a par 72 and 7,300 yards for the championship as teams will play 72 holes of stroke-play qualifying beginning with Friday’s first round. Three rounds of stroke play will be held this weekend through Sunday when the field will be cut to the top-15 teams and top-nine individuals not on the advancing teams for a final round of stroke play on Monday. The NCAA Individual Champion will be crowned and the field will be cut again to the top-eight teams advancing to match play after 72 holes.

The quarterfinal and semifinal rounds of single-elimination match-play will be contested on Tuesday followed by the NCAA Championship Match next Wednesday at Rich Harvest Farms Golf Club.

Golf Channel will once again broadcast live coverage of the NCAA Division I Men’s Golf Championships beginning with the final round of stroke play on Monday from 3-8 p.m. CT. The network will also broadcast each of the three rounds of match play live, including Tuesday’s action with the quarterfinals from 9 a.m.-1:30 p.m. and the semifinals from 3-8 p.m. The NCAA Championship Match will air live from 12-8 p.m. CT on Wednesday with pre-match and post-match coverage in each round.

The Tigers have certainly become tournament regulars in the 11 previous seasons under head coach Chuck Winstead while making seven NCAA Championships appearances for the last seven years after not claiming a spot in the field for 12-straight years from 1998-2009. They are now set to make their 38th appearance all-time in the event.

LSU has proven itself as the most successful team at the NCAA Championships over the last three seasons as it joins Illinois as the only two teams in the country to advance to the “Match Play Eight” each season since a debut appearance in 2014. Winning the program’s fifth national championship in 2015 has highlighted a run that also includes appearances in the semifinals in 2014 and quarterfinals in 2016.

The Tigers came up short in their NCAA-title defense at Eugene Country Club a year ago as they fell 3.5-1.5 to eventual national champion Oregon in the quarterfinal round with the Ducks playing their home course.

Teams finishing in the Top 5 of the final team standings in each of the six NCAA Regionals held last week have qualified for this year’s championship with the Tigers owning the No. 6 overall seed in the field.

The USC Trojans have been awarded the No. 1 seed in the championship field on the strength of their No. 1 national ranking in the latest Golfstat power rankings released after NCAA Regional play. Following are No. 2 seed Oklahoma State, No. 3 seed Vanderbilt, No. 4 seed Stanford, No. 5 seed Baylor, No. 7 seed Illinois, No. 8 seed Oregon, No. 9 seed Kent State and No. 10 seed Texas.

It comes as no surprise that the Tigers will tee off with the same starting five that rolled to an eight-shot victory at the NCAA Baton Rouge Regional as seniors Brandon Pierce and Eric Ricard, sophomores Sam Burns and Luis Gagne and freshman Philip Barbaree compete together for the seventh-straight tournament. LSU has played the same lineup each time out since the General Hackler Championship in March.

The Tigers are among the most experienced teams in the field at this year’s championship as Pierce and Ricard tee off as the two remaining members of LSU’s national championship team in 2015. Both are set to make their third-straight NCAA Championship appearance for the Tigers, while Burns and Gagne compete for the second-straight season.

As freshmen a year ago, Burns and Gagne were the team’s top finishers in stroke play as they tied one another for 13th place on the final leaderboard en route to earning Honorable Mention All-America honors.

Burns has carried that momentum into his sophomore season as he arrives in Sugar Grove as the No. 1-ranked player in college golf in the latest Golfstat individual player ranking. He led LSU to its first ever regional title as the individual champion of the NCAA Baton Rouge Regional where he edged Oregon’s No. 2-ranked Wyndham Clark by a single shot for his fourth tournament title of the season.

Also the champion of the David Toms Intercollegiate, Sun Bowl Western Refining College All-America Golf Classic and Louisiana Classics this season, Burns was recently honored by the head coaches in the Southeastern Conference as the 2017 SEC Player of the Year and a First-Team All-SEC performer.

Burns, who was recently named to Team USA’s Arnold Palmer Cup squad this summer and a semifinalist for the Jack Nicklaus Division I National Player of the Year Award, has cracked the Top 10 in each of his 14 appearances this season and continues to lead the team with a 69.77 scoring average in his 39 competitive rounds for the year. As a sophomore, Burns is on pace to take down his 72.42 scoring average as a freshman in 2015-16 and Pierce’s single-season scoring record for the Tigers of 71.16 set during their the 2014-15 campaign.

Gagne, a Second-Team All-SEC performer in his own right in 2016-17, has been one of the nation’s top performers in the championship season as he tied for third place at the NCAA Baton Rouge Regional after finishing in a tie for seventh place at the SEC Championships. He is the No. 20-ranked player in the country according to Golfweek with a 71.10 scoring average and seven Top 10s in his 14 appearances.

Pierce has shown his All-American form once again in his final season at LSU as he enters the NCAA Championships as Golfweek’s No. 46-ranked player nationally thanks to a 72.07 scoring average and six top-10 finishes from his 11 starts this season. Pierce’s best NCAA finish came as a sophomore in 2015 when he led the team in a tie for 11th place at Concession Golf Club.

Ricard makes his 14th appearance of the season as he boasts a 72.86 scoring average and four Top 10s this year, including a tie for seventh place at the NCAA Baton Rouge Regional last week. Barbaree’s NCAA debut will be his ninth start as a freshman as he owns a 73.71 stroke average during the spring season after enrolling at LSU in January.