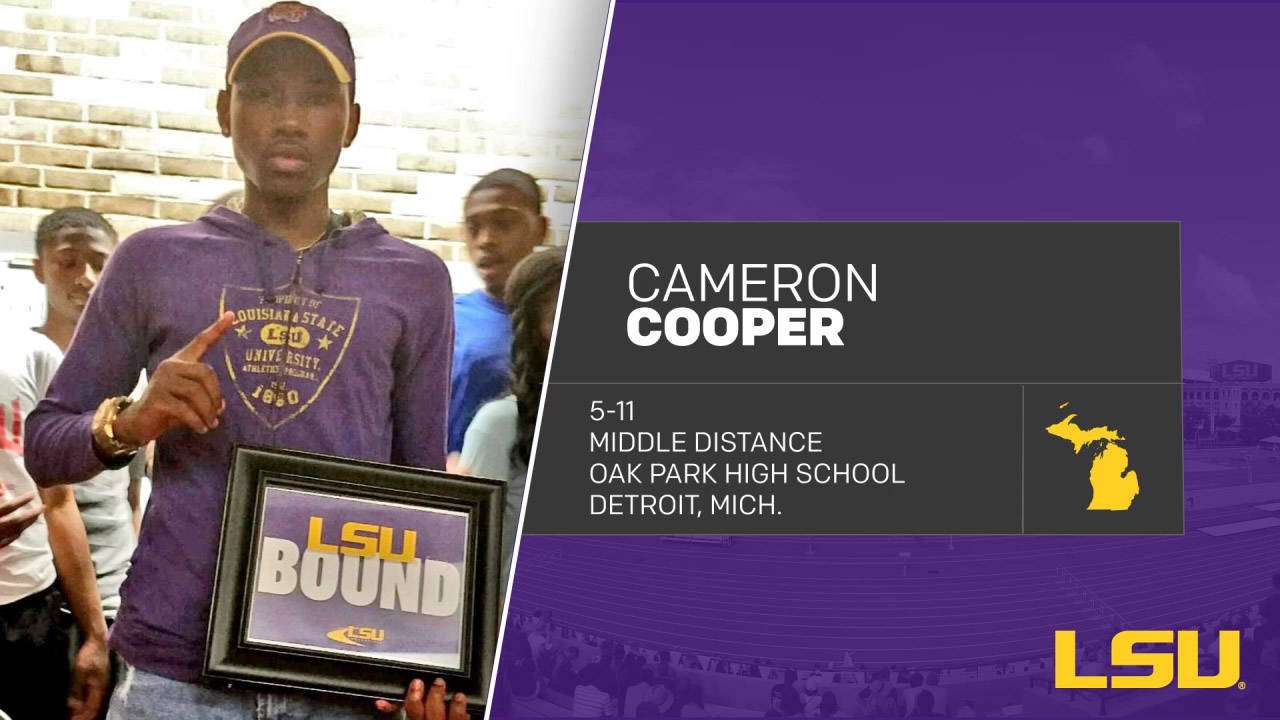 BATON ROUGE – The LSU Track & Field program has added one of the fastest 800-meter runners in the history of high school track and field in the United States to its 2017 recruiting class as head coach Dennis Shaver announced Monday the signing of Cameron Cooper of Detroit, Michigan, to a National Letter of Intent.

Shaver and his staff received Cooper’s signed National Letter of Intent on Friday afternoon to add a key piece to a diverse crop of recruits in the Class of 2017 that is sure to rank among the nation’s best.

“It’s an exciting day for our program to announce that Cameron Cooper has signed his letter of intent to become an LSU Tiger,” Shaver said. “He’s a great young man with a tremendous support system behind him that will only benefit him in his transition to this level on and off the track. We’re excited for him to continue a longstanding tradition of excellence we have here in the middle distance events.”

Cooper wrote his name in the record books during his senior season indoors in 2017 as he became the second-fastest 800-meter runner in the history of high school track and field in the United States when he clocked an indoor personal best of 1 minute, 49.46 seconds to win the 800-meter title at the New Balance Indoor Nationals held at The Armory in New York.

Cooper’s 1:49.46 ranked No. 1 nationally among all high school classes in 2017 and trailed only the indoor national record of 1:49.21 by Robby Andrews of New Jersey’s Manalapan High School in 2009 on the all-time U.S. indoor list. He broke his previous indoor PR of 1:49.82 from the UK High School Invitational in Lexington, Kentucky, earlier in 2017.

A winner of eight national medals between the 800 meters and 1,500 meters during his prep career at Detroit’s Oak Park High School, Cooper clocked his outdoor personal best of 1:49.71 as a junior in 2016 when taking home the 800-meter silver medal at last year’s New Balance Outdoor Nationals. He ranked No. 9 nationally among all high school classifications for the 2016 season and No. 2 among members of the Class of 2017.

Cooper represented the United States on the international stage for the first time as a sophomore in 2015 as he won the bronze medal in the 800 meters at the IAAF World Youth Championships in Cali, Colombia.

Among Cooper’s other medal-winning performances include the 800-meter bronze medal at the 2016 New Balance Indoor Nationals where he ran an indoor seasonal best of 1:50.97 as a high school junior. He also won the gold medal in his age group at the 2015 New Balance Outdoor Nationals along with back-to-back silver medals in 2014 and 2015 at the AAU Junior Olympic Games.