Two Graduates to Tee Off at NCAA Championships 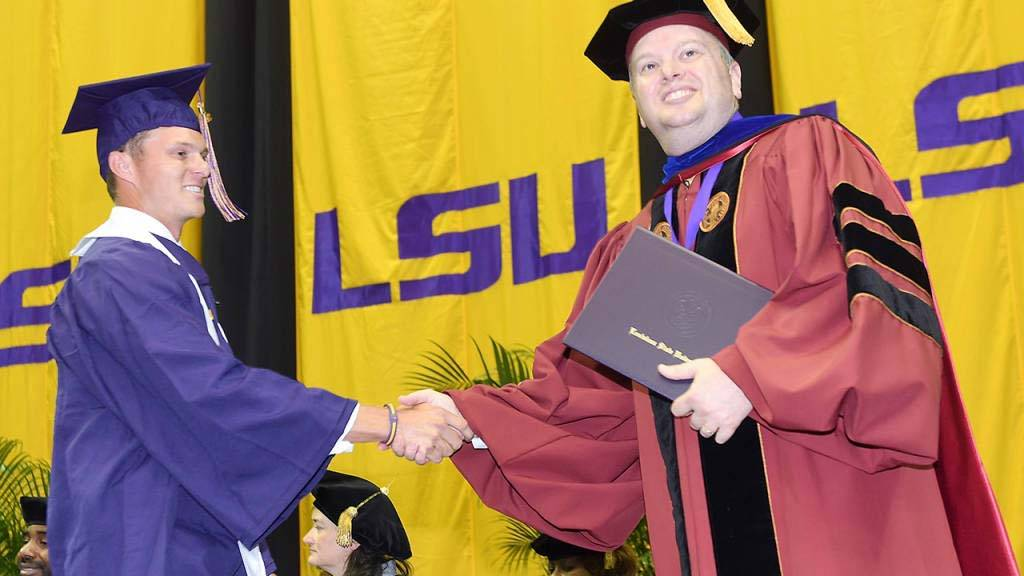 BATON ROUGE – Two recent college graduates will feature in LSU’s lineup at the NCAA Division I Men’s Golf Championships later this week as Brandon Pierce and Eric Ricard lead the Tigers into their season finale for the third-straight season after receiving their degrees during commencement exercises held on May 12.

Both Pierce and Ricard received their bachelor’s degrees in sports administration from the College of Human Sciences & Education in their graduation ceremony held at the Pete Maravich Assembly Center.

Pierce, Ricard and Wright were each in the lineup two years ago when the Tigers secured their fifth national championship in history at the 2015 NCAA Championships held at Concession Golf Club in Bradenton, Florida. That’s where LSU defeated the USC Trojans by a 4-1 margin in the NCAA Championship Match to complete its sweep of SEC and NCAA titles that year.

Pierce and Ricard are both set to make their third-straight NCAA Championship appearance this week as they pace the lineup also featuring sophomore All-Americans Sam Burns and Luis Gagne and freshman standout Philip Barbaree. They earned a return trip to the NCAA Championships after winning the NCAA Baton Rouge Regional last Wednesday for the program’s first ever regional championship.

A Golfweek Third-Team All-American and Second-Team All-SEC in LSU’s NCAA-title-winning season in 2015, Pierce will arrive at Rich Harvest Farms Golf Club in Sugar Grove, Illinois, for this year’s NCAA Championship in All-American form once again with a 72.07 scoring average and six top-10 finishes under his belt in 11 tournament appearances in 2016-17.

Ricard, a former PING Honorable Mention All-American and Second-Team All-SEC performer during his collegiate career, has started 13 events while earning four Top 10s with a 72.86 stroke average this season.

Wright, now a rookie on the Web.com Tour, enjoyed a decorated collegiate career at LSU from 2012-16 as he closed out his career last spring as a Second-Team All-American by both PING and Golfweek and First-Team All-SEC selection for his performance in 2015-16. Wright’s career is most noted by his perfect 6-0 record in three-straight match-play appearances by the Tigers at the NCAA Championships from 2014-16.

Wright earned 14 top-10 finishes and 25 top-20 finishes in his 47 tournament appearances for the Tigers while finishing with a 72.81 scoring average for the whole of his four seasons. A junior in LSU’s national-title team in 2015, Wright earned PING Honorable Mention All-American and Second-Team All-SEC honors that spring.

A native of Blowing Rock, North Carolina, Jones closes out his time as a Tiger with nine tournament appearances in his three seasons from 2014-17 while earning one top-10 finish and posting a 75.36 stroke average.