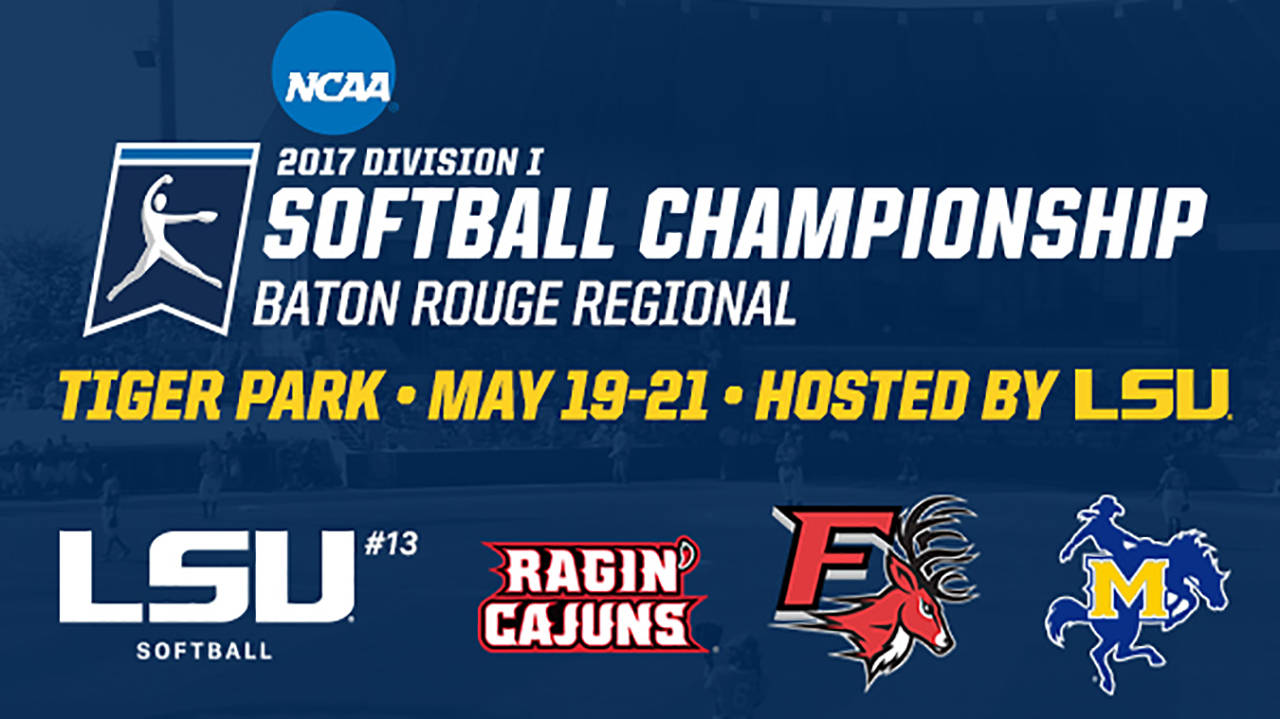 BATON ROUGE, La. – The No. 18 LSU softball team opens the 2017 NCAA Baton Rouge Regional on Friday with a contest against the MAAC Champion Fairfield Stags at 5:30 p.m. at Tiger Park in Baton Rouge.

LSU, the No. 13 overall national seed in this year’s tournament, will host its third consecutive regional beginning Friday also welcoming Louisiana-Lafayette and McNeese State, who will open the regional in the first game of the day on Friday at 3 p.m.

The regional will be available to be streamed online on ESPN3, which can be found through WatchESPN and the WatchESPN app. Lyn Rollins and Yvette Girouard will be on the call for every game of the weekend from Baton Rouge, covering the team’s run throughout the tournament.

Housing every bit of information for the regional this weekend is at www.LSUsports.net/ncaasoftball, which features links to the video stream, live stats and any updates from Tiger Park. The site will also feature a link to free live audio coverage of LSU games at LSUsports.net/live with Patrick Wright calling the action locally in Baton Rouge on Talk 107.3 FM.

The Tigers, fresh off of a run to the SEC Tournament Finals last Saturday come into NCAA Tournament play at 41-18 overall, solidifying its national seeding after earning wins over Missouri, Tennessee and Auburn last weekend, only suffering a loss in the finale to Ole Miss in Knoxville. The run helped push LSU back into the top 20 of both polls at 18 in the NFCA and 19 in the USA Softball poll, finishing the tournament with an RPI of 15 and a top 10 challenging schedule.

LSU has qualified for the postseason for the 12th straight year and 19th time in program history coming into the regional, as the team will be looking to advance past the regional round for the third consecutive season. The Tigers hold a 64-39 record in the NCAA tournament all-time, with 47 of those wins coming in the regional portion of the tournament and 26 of those wins being at home.

The regional will be no easy feat as the three incoming teams were all crowned champions in some form over the course of the season, with UL-Lafayette capturing the Sun Belt regular season and tournament title, McNeese State earning the Southland double and Fairfield winning the Metro Atlantic Athletic Conference Tournament last weekend.

Leading the way offensively for LSU is its senior duo of Bailey Landry and Sahvanna Jaquish, as the two standouts are continuing to push forward in their final seasons.

Landry is nearing an astonishing milestone as the Prairieville, Louisiana, native is five hits away from tying the career hits total at LSU with 285 heading into the weekend. She is at the mark for the best single-season batting average at .431, while seven hits shy of the single-season hit total with 84.

Jaquish is batting .343 which is second to Landry on the team, while she leads the group with 54 RBIs and is second also in doubles and home runs with eight each. In the SEC Tournament last weekend, Jaquish finished an RBI shy of tying the tourney record for most in a single tournament, having six in the four games.

Landry and Jaquish were both named to the SEC All-Tournament team along with pitcher Allie Walljasper, who put together three strong performances in going 2-0 at the event with a save. Walljasper leads the LSU pitching staff with a 16-4 record, as in 133.1 innings pitched she’s walked just 21 batters with 88 strikeouts.

As a whole, the LSU pitching staff has an ERA of 1.67 when adding pitchers Carley Hoover, Sydney Smith and Maribeth Gorsuch. Smith won a game at the conference tournament last week, while Hoover pitched in two games off the bench and Gorsuch got in work earlier this month in the South Carolina series.

LSU’s first opponent in the Stags is an unfamiliar foe as it will be the first meeting between the two sides in program history. The Tigers earned a 4-3 win over McNeese State earlier this season, while LSU and UL-Lafayette will be meeting on the field for the first time since the 2013 season.

On the team’s mentality going into the NCAA Tournament…

“Everyone is excited. It’s nice to have the teams from Louisiana here. That’s great for our state, great for the fans and really good for softball in the state. We have a team like Fairfield that’s bringing an LSU alum as an assistant coach and that’s really cool too. It’s going to be a great weekend.”

On what Fairfield brings to the table this weekend…

“Everybody beat somebody to be here, so there’s no chance that we would ever look past anyone this time of year. They are a quality program, have a solid coaching staff and do a lot of things well. We’ve spent the last few days preparing for them and that’s been our focus. And as soon as that game is over we’ll prepare for the next opponent. We’ll be ready for our first opponent and that’s Fairfield.”

Enters the regional with an overall record of 26-26 on the season… Went 11-9 in the MAAC… Winners of the 2017 MAAC Tournament… Won the last five games of the season, including four games in the conference tournament to qualify… Fairfield did not start its season until February 24… Common opponent in Florida Atlantic falling 3-0, Illinois State falling 5-3 and Bethune-Cookman 10-4… Assistant coach is former LSU standout Stephanie Hill… Hill was an Easton Third-Team All-American in 2005 and an Academic All-American in 2005 and 2006… Currently batting .268 as a team with 357 hits, including 51 doubles, 11 triples and 15 home runs… Led at the plate by Amanda Ulzheimer with a .353 batting average, tied with Tori Reed in hits with 55… Pitching staff has an ERA of 3.72, pitching 11 shutouts… Destinee Pallotto leads the staff in wins with 13 and strikeouts with 99.

Comes into the regional with 45-6 overall record… Went 23-1 in the Sun Belt… Winners of the Sun Belt regular season and conference tournament titles… Ragin Cajuns have won each of their last 13 games coming into the regional… Has seven wins over major conference opponents, including two wins over Alabama and a win over Texas A&M… Currently hitting .397 as a team with 460 hits, including 60 doubles, 10 triples and 83 home runs… Seven players currently hitting over .300 for ULL, led by DJ Sanders and her .397 average… Pitching staff has an ERA of 2.00, led by Alex Stewart and her 25-3 record in the circle.

Comes into the regional with a 42-16 overall record… Was 24-3 in the Southland Conference… Won the Southland Conference regular season and conference titles… Has won each of the last 12 games… Took two games from Penn State in LSU’s first tournament of the season and has wins over the Nittany Lions and BYU this season… Fell to LSU in that tournament 4-3 on a walk-off hit… Is hitting .302 as a team with 461 hits, including 84 doubles, 10 triples and 50 home runs… Justyce McClain leads McNeese with a .447 batting average and 68 hits… Pitching staff has an ERA of 2.47 coming into the tournament with 10 shutouts… Rachel Smith leads the staff with 17 wins and 91 strikeouts.

The winner of the 2017 NCAA Baton Rouge Regional will advance to face the winner of the Tallahassee Regional, featuring host and No. 4 seed Florida State, Georgia, Jacksonville State and Princeton.