Softball to Host Regional as No. 13 Overall Seed 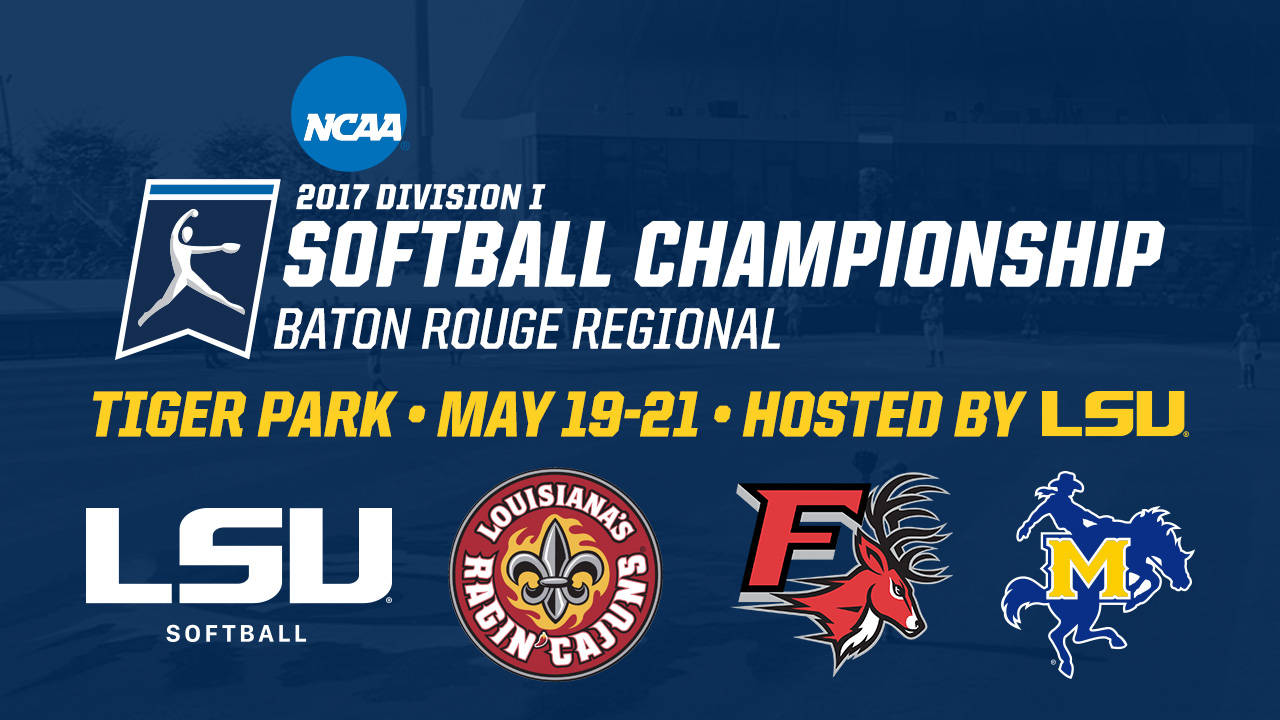 BATON ROUGE, La. – The LSU softball team has been selected as the No. 13 overall seed for the 2017 NCAA Softball Championships and will host the Baton Rouge Regional this weekend with Louisiana-Lafayette, McNeese State and Fairfield May 19-21 at Tiger Park.

LSU will take on Fairfield at 5:30 p.m. CT Friday afternoon at Tiger Park, with McNeese State and Louisiana-Lafayette playing in the first game of the regional at 3 p.m.

Live streaming video will be available for all games from the Baton Rouge Regional via WatchESPN.com. Live audio of all LSU softball games is available free at www.LSUsports.net/live and in the LSU Sports Mobile App.

A seeded team for the third consecutive season, the Tigers come into the postseason with a 41-18 overall record, qualifying for the SEC Tournament final for the second straight season. LSU finished the year earning wins over Missouri, Tennessee and Auburn to solidify its place among the top 16 teams in the country, as the team is one of all 13 teams from the Southeastern Conference to make the NCAA Tournament.

“It’s exciting to host and its fun not to have to travel and play in front of our fans,” head coach Beth Torina said. “They deserve to have us play here too. They’ve supported us all year and they’ve been great all season long. I’m glad we get to play in front of them and play in Tiger Park one more time.”

All three teams in this week’s postseason tournament come in as conference champions, as Louisiana-Lafayette are the champions of the Sun Belt, McNeese the champions of the Southland Conference and Fairfield the winners of the Metro Atlantic Athletic Conference. LSU has already played the Cowgirls this season, with a potential meeting with the Ragin Cajuns for the first time since the 2013 season and first-ever meeting against the Stags.

Louisiana-Lafayette is seeded second in this year’s Baton Rouge Regional, finishing the season 45-6 on the year and ending the season on a 13-game winning streak. The Ragin Cajuns were 23-1 in the Sun Belt, rolling to the regular season and conference tournament title for the second consecutive season.

McNeese State rolled to the Southland Conference regular season championship with a 24-3 record in the league, finishing the season with a 42-16 overall record. The Cowgirls finished the year going on a 12-game winning streak, winning three games in the SLC tournament by a combined score of 28-3. LSU defeated McNeese State 4-3 back in February.

Fairfield comes into the regional this week with a 26-26 overall record, going on a magical run in the MAAC tournament and winning the title with a no-hitter in the title game. The Stags were 11-9 in conference play, winning their final five games, including four consecutive games in the MAAC Tournament to qualify for the tournament.

“I think we’re playing well. There are some ways we have to continue improving and I don’t think we’ve seen our ceiling yet,” Torina said. “We are playing better softball than we have all year long and I think we’re going to continue to improve on a few things this week and be ready to go.”