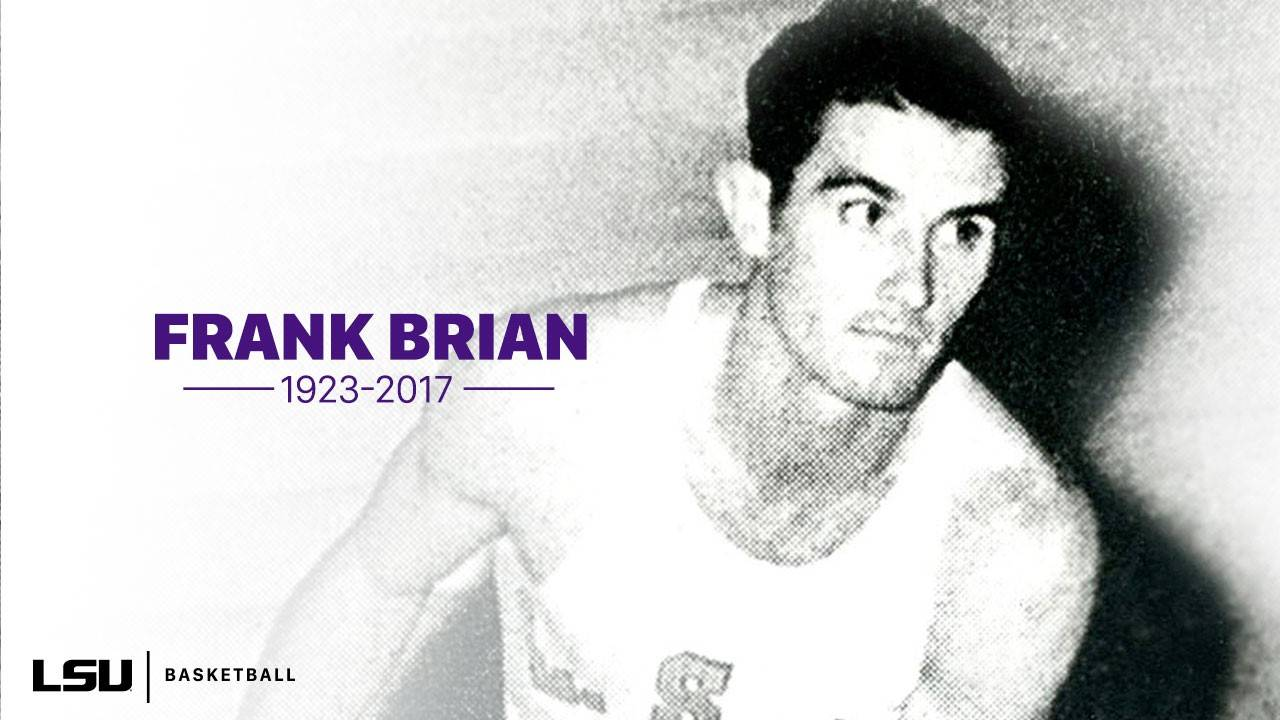 BATON ROUGE – One of the stars of the 1940s era of LSU Basketball, Frank Brian, passed away Sunday morning in his hometown of Zachary at the age of 94.

He was believed to be at the time of his death the oldest living former LSU basketball letterman and the oldest surviving player from the first NBA All-Star Game.

Funeral arrangements through Baker Funeral Home is set for Saturday, May 20 at the Plains Presbyterian Church located at 22929 Old Scenic Highway in Zachary. There will be visitation beginning at 9 a.m. with the funeral service at noon. Brother Joe Ratcliff of St. Francisville will preside over the ceremony. Burial services will follow at the Young Family Cemetery on the Plains Port Hudson Road.

Brian, a high school standout from Zachary, lettered in men’s basketball at LSU from 1942-43 and 1946-47 as a guard. His college career was interrupted by military service in World War II, serving in the US Army from 1944-46. He was named All-Southeastern Conference in basketball in 1942-43 and again in 1947 after returning from the war. Brian also participated in the 1943 SEC Track and Field Championships in four events.

Brian played at LSU at a time when admission to basketball games at LSU was just 55 cents. But his years at LSU both before and after the war marked good times for the program. LSU went from fourth to second with his appearance in 1943 and finished second in 1947.

It was written in the papers of the day of Brian:

“Ten years ago in a small Louisiana town a nine-year-old boy tracked the high school dirt court with his bare feel as he sharpened his eye for the basketball goal. So small was he could hardly shove the ball up to the hoop.

“For seven years that fellow played on that same dirt court in Zachary. In his senior year in high school a gym was built, and he transferred his talent to the hardwood. Then last year he came to the University where he starred on the frosh cage outfit (1941). This year (1941-42), he did the same thing on the varsity team.”

Brian averaged 14 points in 1943 in earning All-Conference honors, third in the SEC in scoring. The “slim” youth with plenty of speed was strong in the SEC Tournament, getting 12 versus Auburn and 18 against Alabama in LSU wins.

But Brian’s career would take a turn that student-athletes of the “Greatest Generation” would have to deal with. In fact, it had affected LSU during that 1942 season as some players had to report to duty in World War II. Coach Harry Rabenhorst had been gone for over a year, serving in the United States Navy.

Brian was inducted into the U.S. Army on Nov. 27, 1942, but was allowed to finish the school term at LSU, including the remainder of basketball season. On May 16, 1943, Brian left for Camp Beauregard, the U.S. Army reception center near Alexandria, La.

By Sept. 4, he had been transferred to Glennan General Hospital where Private First Class Frank Brian found a unit with a strong camp team, the Glennan Generals.

In fact, Brian’s game didn’t suffer because of the war, it may have gotten better. He was able to find time to continue his love of the sport while serving as a medical technologist at the hospital. In fact, in 1945 he was named the most outstanding player of the annual Eighth Service Command Army Service Forces Round-Robin finals, the last of three consecutive tournaments he won MVP honors.

Today, Brian would say that his playing during the war years “enhanced his basketball skills and allowed him to stay a part of the game.”

In his recommendation for Frank’s promotion to Master Sergeant, 2LT. Thomas A. Bello said of Brian:

“He is in direct charge of the supervision of 20 instructors, including three field supervisors. In this capacity, he supervises and corrects work in the gymnasium, at the Main Hospital, and on the wards at the Annex. He is a most competent physical instructor and an excellent leader. He is efficient, energetic, and a capable organizer.”

The maturation of Brian and his Tigers showed during his return for the 1946-47 season as Brian showed he was one of the most poised and polished players ever to don the LSU garb, despite being away from the college game for three long years.

It was at that time that Brian was compared with LSU’s first All-American, Sparky Wade, who led LSU to its mythical national championship in 1935. His ability was tested to the fullest on Feb. 21, 1947, when LSU and Tulane would meet in the Parker Ag Center on the LSU campus.

Part of the story that night was the crowd of 11,500, the largest crowd to make the turnstiles click for a basketball game this side of the Mason-Dixon Line, and the other was that LSU took care of the Wave 55-40.

Coach Rabenhorst after the game paid Brian the ultimate compliment.

“That Brian – he an All-American if ever there was one. Did you see anything like it before? Yes, he’s one of the best players we’ve ever had. Sparky Wade was a different type. A better ball handler and dribbler and perhaps a better long-distance shot, but this Brian, he can do anything – and good.”

The respect Rabenhorst showed to Brian was reciprocated by Brian to Rabenhorst:

“He was tough but fair,” Brian said of his fellow Hall of Famer. “The players on the team during game would have suggestions on needed plays that in their opinion would help advance the team to a win. Coach Rabenhorst was open to suggestions which would help the team as a whole.”

Brian averaged 16 points in conference play and the pro scouts knew all about him. With a wife and family and some seven years playing the game in college and the army, the money for the future of his life and family was more than he could pass up.

He signed with the Anderson Packers of the National Basketball League. For two years he played in the NBL with the Packers, starting in April 1947, shortly after the college season ended. By the end of the 1947-48 season, he was an NBL All-Star and the NBL Rookie of the Year at 11.3 points per game. The next year, he led the Packers with just under 10 points a game, was a First-Team All-Star and the league champions.

The NBL folded and the Packers moved to the National Basketball Association, where Brian was the No. 3 scorer in the league with a 17.8 points per game average. When Anderson fell out of the league, he would move to Tri-Cities where he averaged 16.8 points and 3.9 assists. He would be in the top 10 in NBA scoring a third straight year in 1952 with a 15.9 average.

Over seven seasons, Brian would average 12.3 points and 2.6 assists, finishing his career with the Fort Wayne Pistons. He was two-time NBA All-Star and his team played for the NBA title in 1955 and 1956.

In an interview for the book “Walking with Tigers,” legendary guard Bob Cousy told author Jeffrey Marx about Frank: “He was a hard player to guard. He was just so fast, quick as could be.”
The truth was basketball was a different game when Frank Brian played. Because of World War II, so was life for people of his age. But he starred in a time and era when his silky-smooth style of game allowed him to shine and one who should be remembered as the greats in LSU basketball history.