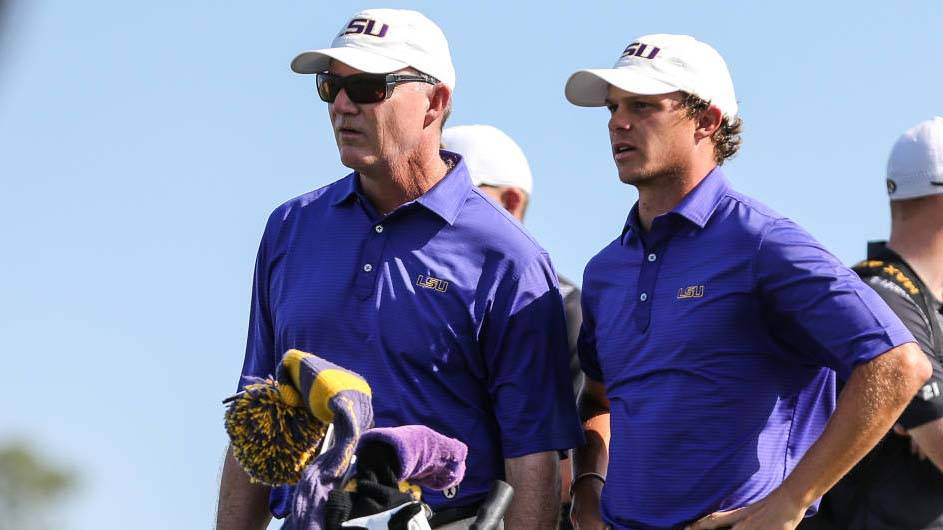 BATON ROUGE – The road to the 2017 NCAA Division I Men’s Golf Championships rolls through The University Club this week as the No. 6-ranked and No. 1-seeded LSU Tigers play host to a loaded field of 14 teams and five individuals teeing it up at the NCAA Baton Rouge Regional beginning Monday at 8 a.m. CT.

Tee times in Monday’s opening round are set to begin at 8 a.m. on the front nine and 8:20 a.m. on the back nine, while the three-day, 54-hole regional championship continues Tuesday with the second round at 8 a.m. and Wednesday with the final round at 7:30 a.m. The University Club will play to a par 72 and a lengthy 7,372 yards for the event.

This marks the second time that the University Club will play host to NCAA Regional play on the men’s side as the Tigers also advanced on their home course in 2013 while playing as the No. 3 seed.

LSU has now earned an NCAA Regional selection in 10-straight seasons since 2008 and 11 times in its 12 seasons under head coach Chuck Winstead. While hosting the NCAA Baton Rouge Regional at the University Club, they will look to qualify for the field at the NCAA Championships for the seventh time in the last eight seasons.

Golfstat will provide live scoring for the event as fans can follow the Tigers and the rest of the teams in action at http://www.golfstat.com.

Fans of college golf across the country will surely have their eye on the NCAA Baton Rouge Regional as it features each of the sport’s last two NCAA Champions with No. 1 seed LSU (2015) and No. 2 seed Oregon (2016) headlining the 14 teams in the field this week. The tournament also sets up a rematch of sorts as Oregon defeated LSU, 3.5-1.5, in the quarterfinal round of match play at last year’s NCAA Championship en route to the national title on its home course at Eugene (Ore.) Country Club.

Following their practice round at the University Club on Sunday, LSU, Oregon and Virginia are paired with one another in Monday’s opening round as they will start in the first wave off the front nine beginning at 8 a.m. CT. Pairings of teams and individuals in the second and third rounds will be determined based on the results of each round.

The Tigers have followed with another successful season in 2016-17 as they have captured five tournament titles to sit at No. 6 nationally in the final Golfstat power rankings heading into NCAA Regional play.

An experienced lineup will look to lead the Tigers back to the NCAA Championships as seniors Brandon Pierce and Eric Ricard, sophomores Sam Burns and Luis Gagne and freshman Philip Barbaree tee it up at the NCAA Baton Rouge Regional this week. Pierce and Ricard are both making their third-straight NCAA Regional appearance, while Burns and Gagne make their second and Barbaree is set for his debut.

This marks the fifth-straight tournament in which Head Coach Chuck Winstead has selected the same starting lineup as this quintet has featured each time since the General Hackler Championship back in March.

Burns, the 2017 SEC Player of the Year and First-Team All-SEC selection, plays as the No. 2-ranked player in the country in both the Golfstat and Golfweek individual rankings after running his streak of top-10 finishes on the season to 13-straight when he tied for ninth place at the SEC Championships last month.

Burns, who was recently named to Team USA’s Arnold Palmer Cup squad this summer and a semifinalist for the Jack Nicklaus Division I National Player of the Year Award, has cracked the Top 10 in each of his 13 appearances this season and continues to lead the team with a 69.69 scoring average in his 36 competitive rounds for the year. As a sophomore, Burns is on pace to take down his 72.42 scoring average as a freshman in 2015-16 and Pierce’s single-season scoring record for the Tigers of 71.16 set during their the 2014-15 campaign.

Gagne is also fresh off earning his first career All-SEC honor when he picked up a second-team selection after tying for seventh place at the conference tournament in April. He enters NCAA Regional play as the No. 25-ranked player in the country according to Golfweek while averaging a career-low 71.03 strokes per round. Among Gagne’s 13 tournament appearances this season are six top-10 and 11 top-20 finishes this season.

Pierce has proven once again to be one of the elite players in college golf as the No. 38-ranked player nationally by Golfweek. While pushing his career-best with a 71.67 scoring average to rank third on the team on the season, he has matched Gagne with six top-10 finishes from his 10 starts as he helps lead the Tigers into NCAA postseason play for the final time.

Ricard makes his 13th appearance of the season as he boasts a 72.85 scoring average and three Top 10s this year, while Barbaree owns a 73.56 stroke average in seven starts this spring after enrolling at LSU in January.

Six NCAA Regionals will be contested across the country as teams will look to finish in the Top 5 of the final team standings to make up the 30-team field at the 2017 NCAA Division I Men’s Golf Championships.