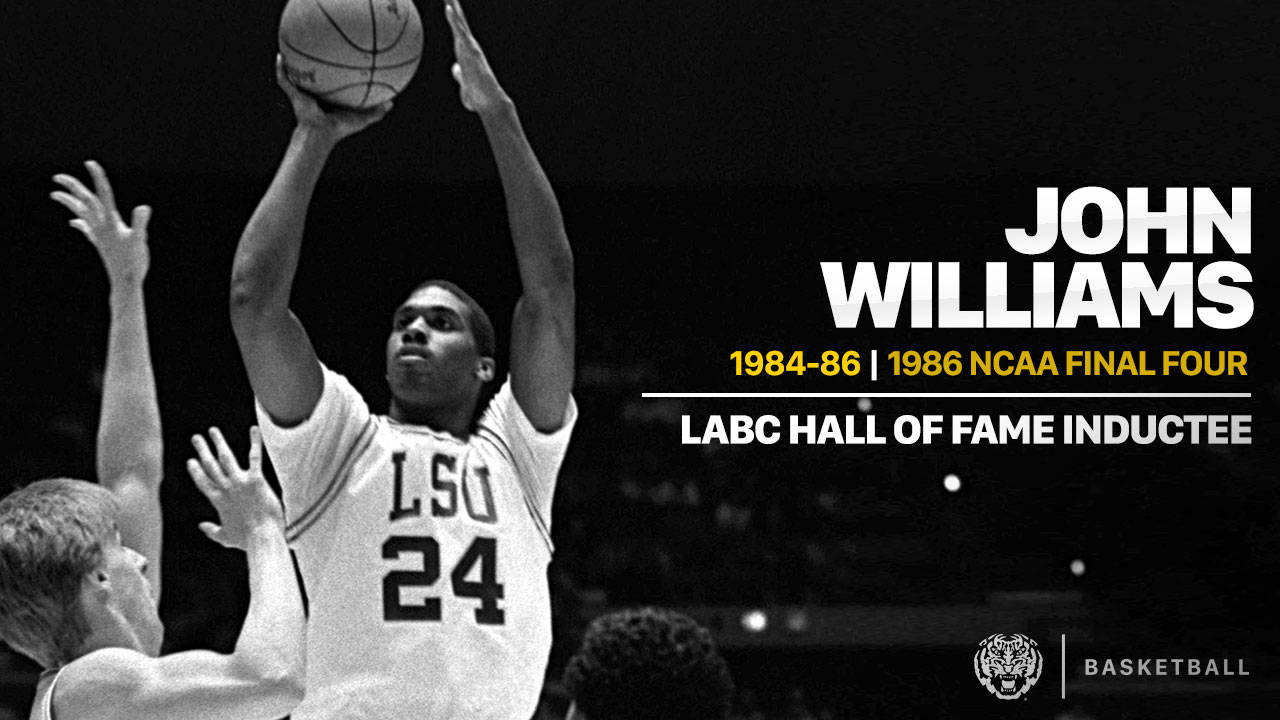 BATON ROUGE – John Williams was a prospect everyone wanted.

Louisiana and LSU got him.

For two years, he helped Coach Dale Brown continue a run of excitement at LSU in basketball, including an appearance for the Tigers in an NCAA Final Four.

Now he will be inducted into the Louisiana Basketball Hall of Fame during the Louisiana Association of Basketball Coaches’ 43rd Annual Awards Banquet on May 13 at the Embassy Suites Hotel in Baton Rouge. The banquet is sponsored by the Baton Rouge Orthopaedic Clinic.

“I’m excited and shocked at the same time,” said Williams recently when discussing going into the Louisiana hall. “I was looking at some of the other players that have been inducted and just to be named with these guys is something very special.”

Williams came out of Crenshaw High School in Los Angeles, a five-star in a day when all these recruiting services weren’t listing stars. He was 6-8, 235 pounds coming out of high school. Brown and associate coach Ron Abernathy battled the other power players in college basketball at that time and signed Williams to come to Baton Rouge.

Coach Brown came to realize that the forward he recruited could play any position on the court.

“In 44 years of coaching, he is the only player I have had … and I have had some great players,” said the 25-year head man of the Tigers. “He’s the only player that could play all five positions on the court. He had moves to them all. He was the guy that just stood out amongst anybody.”

“That’s how I grew up playing,” Williams said. “I had great coaches all my life. I just tried to fit in. We had a great team and a great run. We understood each other and we had a lot of fun with it.”

In describing his game while at LSU, Williams had a style that a lot of teams and coaches would have loved.

“I was trying to be an all-around player, unselfish … That was just the way I was raised and coached as I was coming up to try to play the right way,” Williams said. “To try and make my teammates better and that’s what I tried to do. It wasn’t anything new to me because I had been doing it since grade school. I just wanted to continue and just make everyone better.”

In many respects, Williams’ two seasons at LSU couldn’t have been any different – not so much statistically, but in how the winding road of a basketball season ended.

In his 1985 freshman SEC season, the Tigers won the SEC regular season title and were a fourth seed in the NCAA Tournament. Their opponent – Navy, making their first post-season appearance since 1960. Navy won over an uninspired LSU team, 78-55. A big guy named David Robinson had 18 points and 18 rebounds for the Midshipmen.

Williams made a promise to Coach Brown that he would do his best to keep.

“It wasn’t a real good feeling (after the Navy loss),” Williams recalled. “We had a good team. We didn’t play together. I learned from that. I felt I could have done better that first year. But it just didn’t happen. I told Coach Brown as we were going in the locker room that it wasn’t going to happen next year. I kept my promise.”

In 1986, the LSU story was as much about blending the improbable with reality. Three inside players for LSU were suddenly not playing for various reasons by the time SEC play really got rolling. The Tigers were struggling to win games in the league. Oh yea, the infamous chicken pox situation figured into the story.

LSU would somehow make the NCAA Tournament as one of the last, if not the last, at-large team selected as an 11th seed. But, the Tigers would not only make the tournament. They would play at the then LSU Assembly Center for the first two rounds.

“Wow, it was amazing,” Williams recalled. “The first game was Purdue. They were a feisty team, like us. We didn’t want to disappoint. With us playing at home, that made it more exciting for the players, and also for the fans. It was a great game. It went back-and-forth.”

LSU would win late in the night in double overtime, 94-87. Williams had 16 points, 12 rebounds and eight assists.

“Then there was the Memphis game. I was real hyped for that game because they had been ranked during the season and no one really thought we had a chance. That’s when the players responded in a positive way. We came together. We were more detailed with Coach Brown pushing us to the max getting everything he could out of us, we made it happen.”

That CBS broadcast of the final seconds has been replayed every time 1986 is brought up — Anthony Wilson picking the ball out of the scrum and dropping it in for the game winner as time expired.

In a New York Times article in 1986 prior to the national semifinals, Abernathy talked about that Memphis game.

“We were down by 12 points and (Coach Brown) called a timeout. When our kids came over to the bench, Dale ripped his coat off and threw it under the bench. John Williams told me after the game that he knew it was trouble when coach took off his jacket.”

From there it was to Atlanta for the regionals and more upsets over Georgia Tech and Kentucky. LSU, in an improbable year, was improbably in the national semifinals.

It was so obvious when the team gathered for their first major reunion in 2006 that these guys were special. That the season was special. That the memories still linger all these years later. The players all spoke that night about the team and the “chemistry” they shared to make things happen.

One player got up and apologized that night. It was John Williams. He apologized to his teammates for leaving for the NBA after his sophomore season. Maybe the Tigers could have gotten past Indiana in that Elite Eight game (in the 1987 NCAA Tournament) if Williams was still at LSU. It’s all speculation.

Williams knew he needed to take advantage of the opportunity after his sophomore year to take care of his family. The opportunity was there. He had to declare hardship and enter the NBA Draft, and Washington made him their pick in the first round.

“(John) always put the team above himself,” Brown said. “Everyone loved him on the team. Not one time while he was here did he ask for anything special. He never thought he was special. He was just a common ordinary guy. He’s very transparent. He’s a very sincere guy.”

And someone who had the time of his life leading LSU back to an NCAA Final Four in 1986.

In addition to the Louisiana Basketball Hall of Fame induction, the May 13 awards banquet will include recognition of Louisiana’s major college, small college, junior college and high school players and coaches of the year, the top pro player from the state, and the presentation of the LABC’s Mr. Louisiana Basketball award to former long-time college basketball official Mark Whitehead.

The Louisiana Basketball Hall of Fame is sponsored by the LABC. The Hall of Fame was created in 1975 to honor former great basketball players and coaches from Louisiana colleges. More information about the LABC and the Hall of Fame can be obtained by visiting their website at www.labball.com.