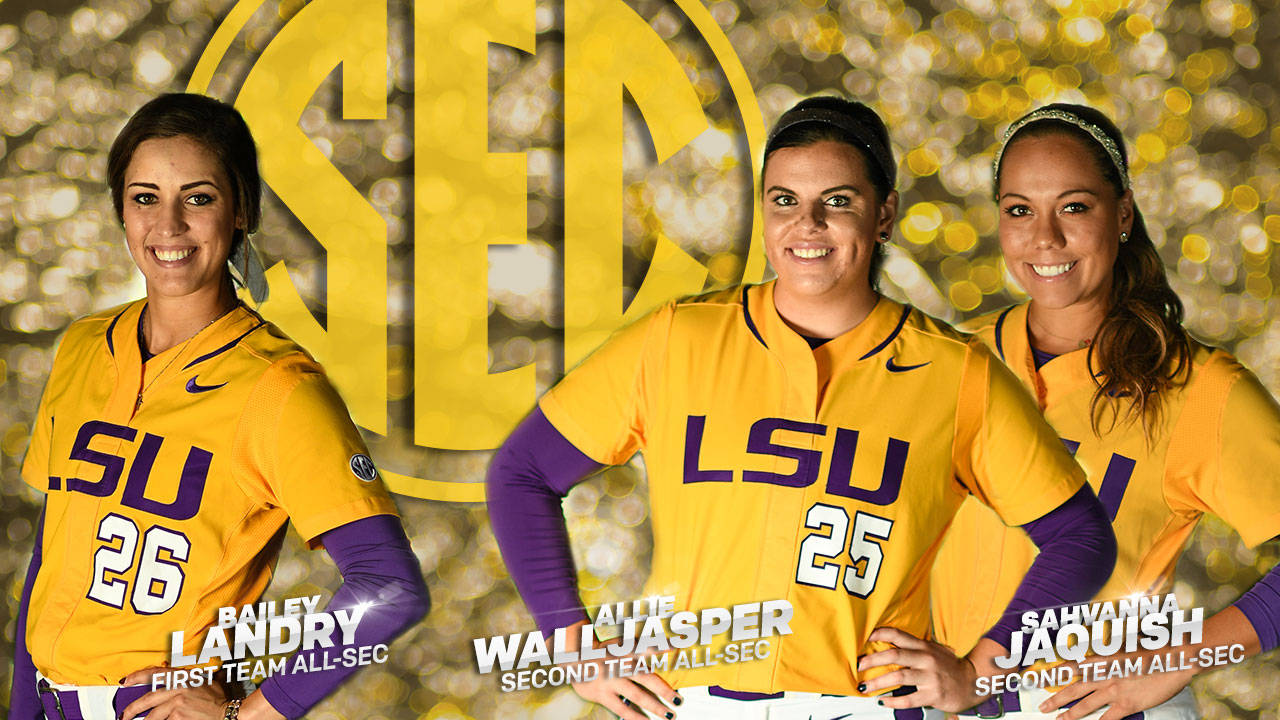 KNOXVILLE, Tenn. – LSU senior outfielder Bailey Landry was named to the 2017 All-SEC First Team, while senior catcher Sahvanna Jaquish and junior pitcher Allie Walljasper were named to the All-SEC Second Team the league announced on Tuesday ahead of the start of the 2017 SEC Softball Tournament in Knoxville.

Landry is being honored for the third time overall in her LSU career, while Jaquish is nabbing her fourth SEC postseason honor and Walljasper garnering her first. The All-SEC Teams consist of 29 total student-athletes, along with a 13-member All-Freshman team and a nine-member All-Defensive Team. No ties were broken.

Producing one of the best offensive seasons in LSU history, Landry has been one of the top hitters in the nation this year as she featured a batting average that was in the .500’s for a good portion of the campaign. Second in the SEC with her .440 batting average and tied for the league lead in hits with 80, the Prairieville, Louisiana, native is on-pace to shatter the 17-year-old previous school average of .431 set by Ashlee Ducote back in 2000, while also sitting 10 hits shy of setting the school record for most hits in a career.

No stranger to postseason awards, Jaquish wraps up her stellar campaign with another postseason selection as the Highland, California, native is currently leads the team with 47 RBIs and is second on the team in batting average, doubles, home runs and slugging percentage. Setting the career RBI mark earlier this season, Jaquish has also set the all-time career walks record and the in-season record as she has been issued 60 free passes this season, including receiving six intentional walks which is second-most in a single season, with her 13 being the most for any LSU Tiger ever.

Walljasper’s junior season has arguably been her best to date as she currently leads the LSU pitching staff with a 14-4 overall record. With a 1.20 ERA, the Manteca, California, product has posted five shutouts this season to lead the staff, as opponents are hitting just .196 against her when she is in the circle. This season alone, 6-2 right-hander has tossed a pair of seven-inning one-hitters and a two-hitter to her credit, only allowing more than two runs in a game three times, issuing just 19 total walks on the season.

LSU opens play in the 2017 SEC Softball Tournament Wednesday night at 6:30 p.m., taking on Missouri. The game will be aired live on the SEC Network.
For all of the latest news and information on Tiger softball, visit www.lsusports.net/softball. Fans can also follow the program on its social media outlets at www.Facebook.com/lsusoftball along with @lsusoftball and @BethTorina on Twitter and @lsusb on Instagram.