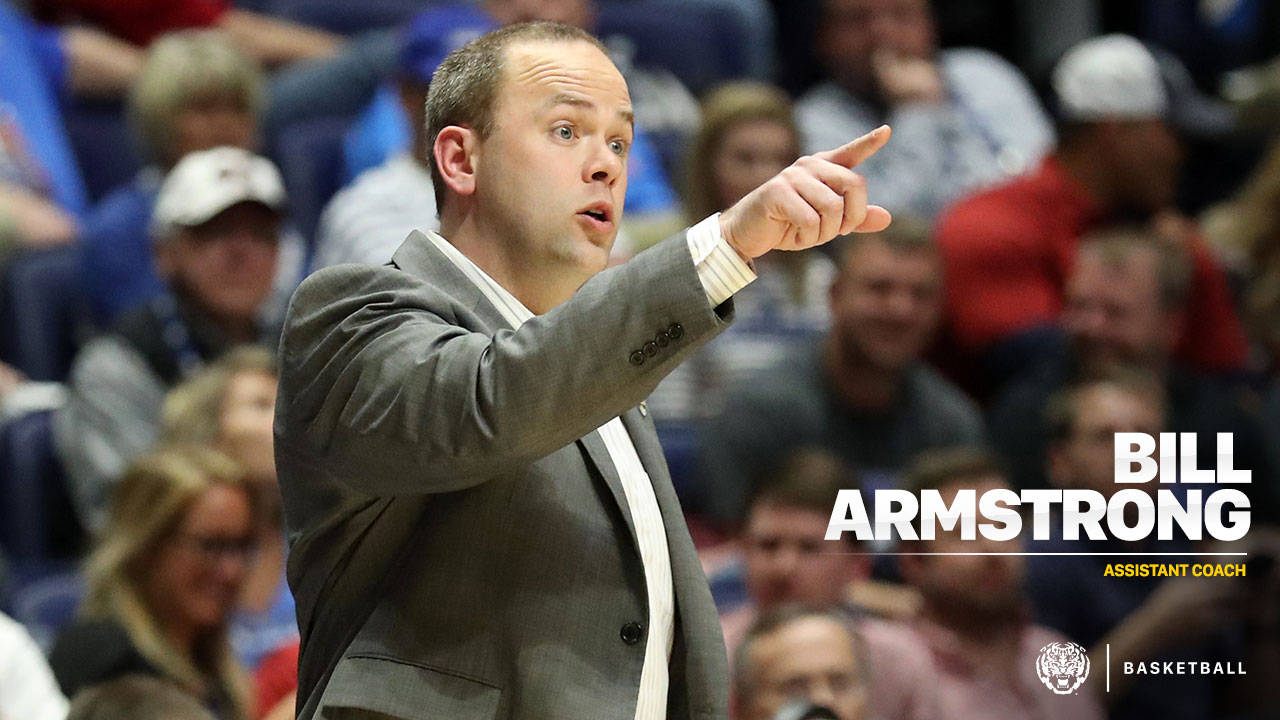 He will join Tony Benford and Greg Heiar as the three on-floor assistant coaches on the LSU staff. His hiring is pending the normal background checks and LSU Board of Supervisors approval.

“Bill Armstrong‘s knowledge of the Southeastern Conference and his excellent record made him stand out from a very strong pool of potential candidates,” said LSU Coach Wade. “Bill is a great addition to our staff as we look to continue to move this program forward.”

Armstrong has served for the last six seasons as an assistant coach for the Rebels after five years as Ole Miss Coordinator of Basketball Operations.

“This is a great opportunity for me and my family to join one of the top basketball programs in the country,” said Coach Armstrong. “I really appreciate Coach Wade and his staff in welcoming us to the Tiger family. Growing up in SEC country, I understand the pride and support of the people of Louisiana and I look forward to working with Coach Wade to restore the tradition of LSU Basketball.”

During his time at Ole Miss, the Rebels won 20 games nine times in 11 seasons. In the last few years, he was on a staff that featured guard Stefan Moody, who earned All-SEC honors for two straight seasons and big man Sebastian Saiz, who finished first in the SEC in rebounding this past season. Armstrong’s contributions have helped Ole Miss to an SEC Tournament title, eight postseason berths and a pair of SEC West titles over the last 11 seasons.

He was on the staff in 2014, when Marshall Henderson ranked third in the nation with 4.3 3-pointers made per game and Jarvis Summers was the only player in the league to rank in the top 10 in scoring and top five in the SEC in both assists and field goal percentage.

Armstrong and the Rebels broke through in 2012-13, as Ole Miss tied a school record with 27 wins, claimed the school’s second SEC Tournament title and advanced to the NCAA Tournament for the first time since 2002. Armstrong also helped Henderson to SEC Player of the Year honors and Summers to rank second in the SEC in assist-to-turnover ratio.

“I’ve enjoyed my time at Ole Miss and cherish the friendships and memories we made there,” said Armstrong. “Thanks to Coach (Andy) Kennedy and the University for their support in preparing me as we begin the next chapter in my coaching career.”

Before his arrival in Oxford, Armstrong spent three years as an assistant coach at Birmingham-Southern. In his first season with the Panthers in 2003-04 – BSC’s first season of full NCAA eligibility – Armstrong helped the team to a 20-7 record and a 12-4 mark in conference play, earning a share of the Big South regular-season championship. Birmingham-Southern posted a 19-9 finish in his final year.

A Birmingham native, Armstrong joined the BSC staff after serving as an assistant at Chipola Junior College in Marianna, Fla., where he helped lead the Indians to a 23-9 record and a second-place finish in the Panhandle Conference in 2002-03.

Prior to his stint at Chipola, Armstrong was a graduate assistant for UAB during the 2001-02 campaign under Murry Bartow. Armstrong graduated from UAB in 2001 with a degree in justice sciences. He was also the recipient of the Barbara Hallerman Scholarship for Leadership.

A four-year letterman at UAB from 1998-2001, Armstrong played under Kennedy, who was then an assistant coach with the Blazers. He served as team captain as a senior and helped the Blazers reach the NCAA Tournament in 1999 and the NIT in 1998.

Armstrong was a three-year letterwinner for his father, Jimmy, at Oneonta (Alabama) High School where he was Academic All-State, Class 2A All-State, averaging 19.7 points and 7.8 assists per game as a senior. His team won the Area 11 championship for two consecutive seasons (1994-96) and reached the Alabama Class 2A Sweet 16 both years.

He graduated from UAB in 2001, his last year spent as a graduate assistant before going to Chipola.