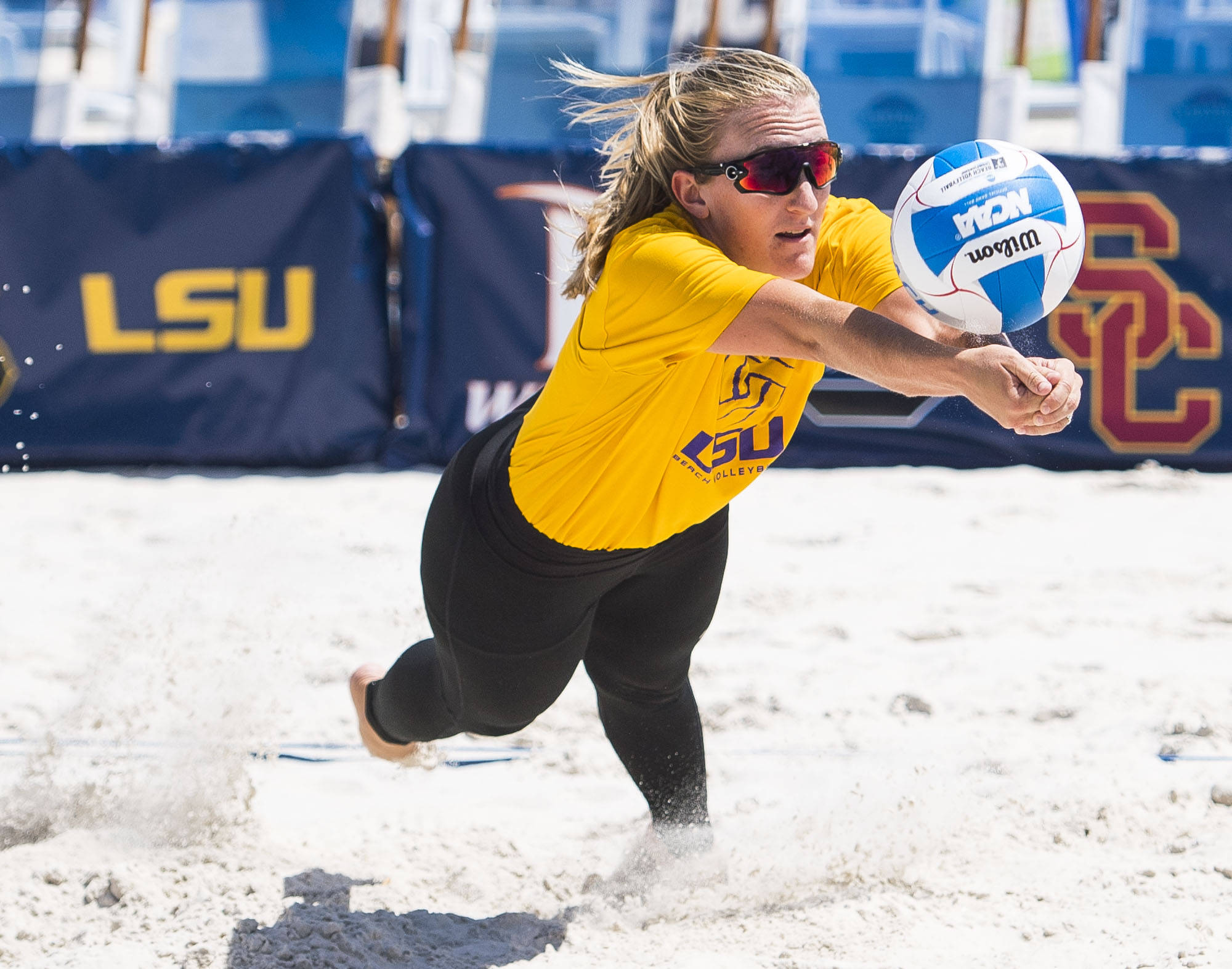 GULF SHORES, Ala. – The No. 7 seed LSU beach volleyball team (26-6) completed its final preparations at practice on Thursday as the team readies itself to take part in the program’s first-ever match at the NCAA Beach Volleyball Championships.

The Tigers will square off against the second overall seed UCLA (29-4) at 11 a.m. CT on Friday at the Gulf Shores Public Beach. LSU looks to avenge its loss to the Bruins earlier this season after falling in the first match by a score of 3-2 at the East vs. West Invitational in March.

The winner of the LSU/UCLA matchup will take on the winner of No. 3 Pepperdine and No. 6 Long Beach State at 4 p.m. CT. The losers of both matches will fall to the elimination bracket and will face off at 2 p.m. CT.

The event will be televised live by Turner networks with truTV providing live coverage on Friday and Saturday from 2-5 p.m. CT. The championship round will air on TBS on Sunday at 1 p.m. CT.

Additional live streaming coverage of every court in each match of the tournament will be available on NCAA.com. All championship site match times and other information will also be made available at www.ncaa.com/beachvolleyball.

“We had a good afternoon practice where we got out in the sand and the conditions and loosened everyone up and gave them some touches. We had a good trip up and everything is running pretty smoothly,” said head coach Russell Brock.

“Our final preparations are to clean up some areas and to understand that this is just another opportunity to play. It’s a bigger stage, but the game that we played well all season long is the game that we need to bring.”

LSU is led by No. 1 pair Kristen Nuss and Claire Coppola, who hold best record on the team at 26-6. In just their first collegiate season, Nuss and Coppola received Coastal Collegiate Sports Association All-Conference accolades for their performance with Coppola also picking up All-Freshman honors.

After partnering together at the Battle on the Bayou, Emmy Allen and Maddie Ligon have won five straight on court two after going undefeated at the CCSA Conference Championships. The pair have an overall record of 7-1 record this season, recording six of their wins at the two spot.

Riding a 14 match winning streak at the third flight, Katie Lindelow and Olivia Powers have been nearly unstoppable, compiling an overall record of 24-3 for the second best record on the team. The tandem has won 24 of their last 25 matches, including nine wins against ranked opponents.

No. 4 duo Callan Molle and Cati Leak will look to close out their final slate of matches as Tigers with victories. This season, the long-time duo has a 9-1 record and have won 9 of their last 10 matches.

On court five, Megan Davenport and Riley Young collected a 13-4 record together, picking up six wins against ranked competition.

“We expect to play better (against UCLA). It’s just going to be a matter of who is going to execute their game plan and the ability to play in these conditions better than the other team. Our focus has to be on a strong mentality and being able to not be impacted by our surroundings,” added Brock.

“Our experience (playing UCLA in California) will allow us to be more comfortable and play more naturally, which is what we need to do to give ourselves the best chance to win.”