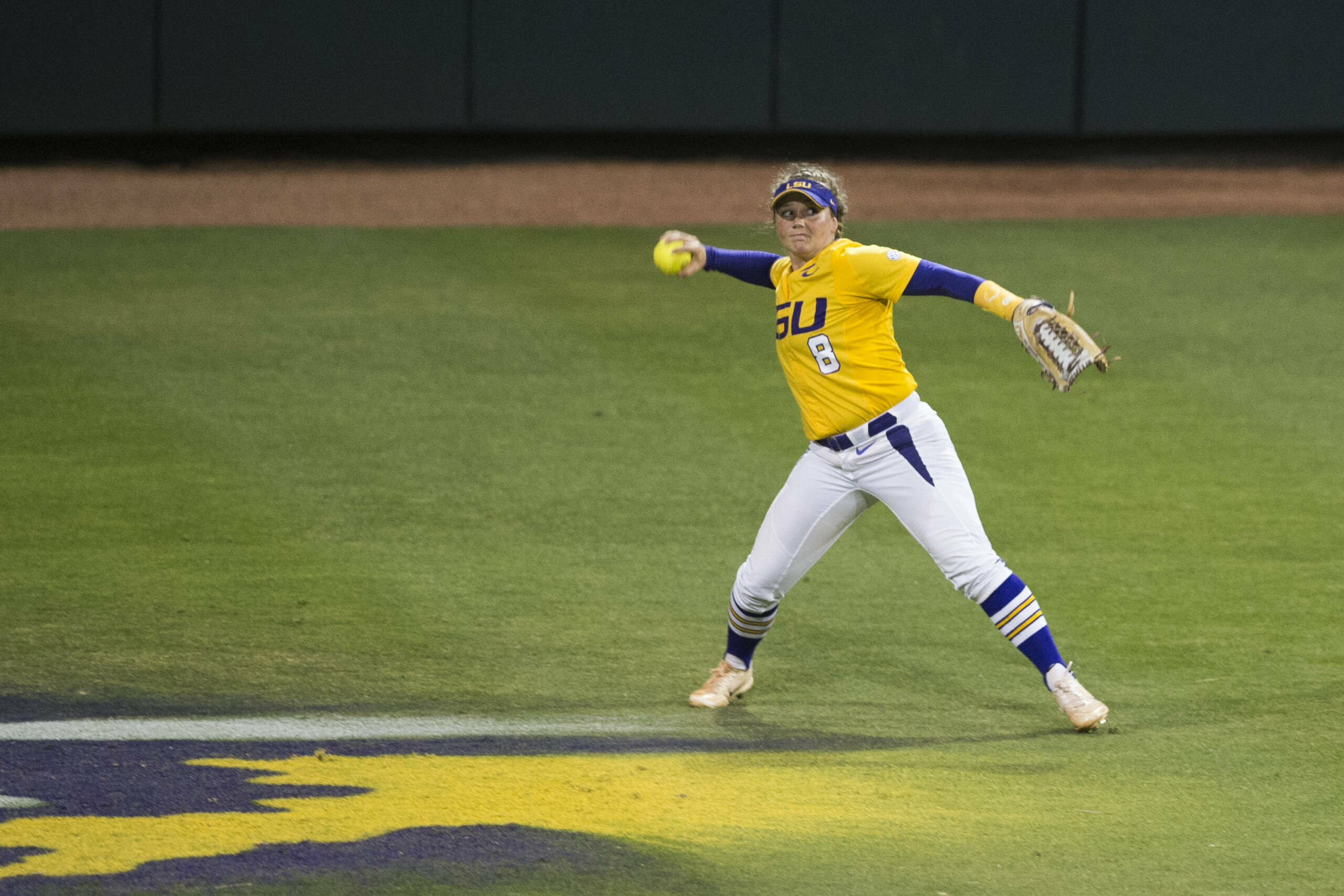 BATON ROUGE, La. – The No. 18 LSU softball team will close out the 2017 regular season this weekend, traveling to take on the South Carolina Gamecocks in a three-game SEC series in Columbia.

LSU heads into the final series of the regular season as winners of four of their last five and five of the last eight overall after pulling out the series against Missouri at home last weekend. The Tigers are currently 37-15 on the season and 11-10 in league play, finishing the home schedule with a 27-5 record at Tiger Park.

The Tigers occupy the sixth spot in the league standings heading into the final weekend of play, tied with Kentucky who also have an 11-10 record in conference, but one spot up due to the team’s series win over Georgia from earlier in the season, a series that the Wildcats dropped back in March. Both teams are just a game back of Alabama in fifth place with an 11-9 mark in conference play.

With every team in the SEC being in the top 35 of the latest RPI report, every game will be key for the Tigers as they are currently 12th in the latest release with the sixth toughest schedule in the country, as wins this weekend against a South Carolina team that is 24th and in the 2017 SEC Softball Tournament in Knoxville next week could help LSU solidify a regional host spot when the NCAA Tournament begins two weeks from now.

The team’s leading hitter last week and over the course of the season has been Bailey Landry, who had an average of .308 in LSU’s four games last week and is hitting .453 which is still in the top 10 nationally and continues to lead the SEC. Her 77 total hits is second in the league, but she is approaching two milestones with her batting average first if the season ended today being the best in program history and her 278 all-time being 12 shy of the school record of 290 which was set by Dee Douglas.

Landry is one of three current LSU players currently hitting above .300 on the year, along with Sahvanna Jaquish and Emily Griggs. Jaquish is currently hitting .347 and is second on the team in doubles and home runs with seven in both categories, while leading the team with 47 RBIs. Griggs is second on the team in hits with 51, while also sporting a perfect fielding percentage in center field.

Offensively, one of the big keys last weekend was the number of free passes issued to the squad with 15 total walks. Nine of those were to Jaquish, who now stands one walk away from tying Bianka Bell’s record of 56 set last season. Over the course of her four-year career she has been on the receiving end of 158, obliterating the previous record of 141.

The Tiger pitching staff had a solid week, allowing just six runs to cross the plate in four games and heads into the showdown with South Carolina sporting an ERA of 1.51. Against South Alabama and Missouri the staff had an ERA of 0.50, as just two of the six runs were earned.

Allie Walljasper pulled off a win and a save last week, as she is now 13-3 on the season with a 1.01 ERA. She has given up just 21 runs in 104.0 innings pitched, tossing five shutouts and walking just 18.

Carley Hoover earned two of the three wins for the team, allowing just one run on nine hits in 13.2 innings of work, while striking out 12. She’s 11-6 on the year with four shutouts and leads the staff with 141 strikeouts in 116.2 innings pitched.

South Carolina is coming off of a series win at Georgia last weekend and is 30-21 on the season and 6-14 in league play. The Gamecocks have one of the more impressive wins of the season in defeating former No. 1 team Florida State in Columbia to split a two-game series against the Seminoles, South Carolina’s first win over a top-15 side in 15 years.

LSU holds a 44-14 advantage in all-time meetings against South Carolina, winning each of the last three regular season series the two sides have squared off in.

“At this point we’re trying to get in the top 16 to host a regional. I think that’s the most important thing for us right now. Where we finish in the SEC of course is important, and finishing as high as we can is what we strive for. The biggest thing we can do is play our way into one of those seeds and be back here at Tiger Park in a couple of weeks for the postseason.”

“Typically, this has been the time in the year where our teams have really turned it on and we tend to play well at the end of the season and into the postseason. I personally think it’s the personality of the team and the ability of our staff to prepare the team for this part of the year.”

Comes into the series with a 30-21 overall record and 6-14 record in conference play… Is coming off of a series win over Georgia in Athens last weekend… Gamecocks are 20-8 in home games this season, including pulling off a 7-2 win over then-No. 1 ranked Florida State in Columbia back in April… Have only been swept in two conference series this season, winning at least one game in every other league weekend… Currently has an RPI of 24… Is hitting .283 as a team with 368 hits on the year… 73 of those hits have been doubles, with seven triples and 38 home runs… Mackenzie Boesel leads the hitters with a .329 average and 51 total hits, sitting second on the team in doubles, home runs and RBIs… Pitching staff has an ERA of 2.91, pitching 14 shutouts… Nickie Blue has the lowest ERA on the team at 2.38 in 129.1 innings pitched, while also having three saves… Jessica Elliott leads the staff in wins with 14 and has five shutouts.

LSU opens play in the 2017 SEC Softball Tournament on Wednesday against an opponent to be determined on Sunday after the conclusion of regular season contests.