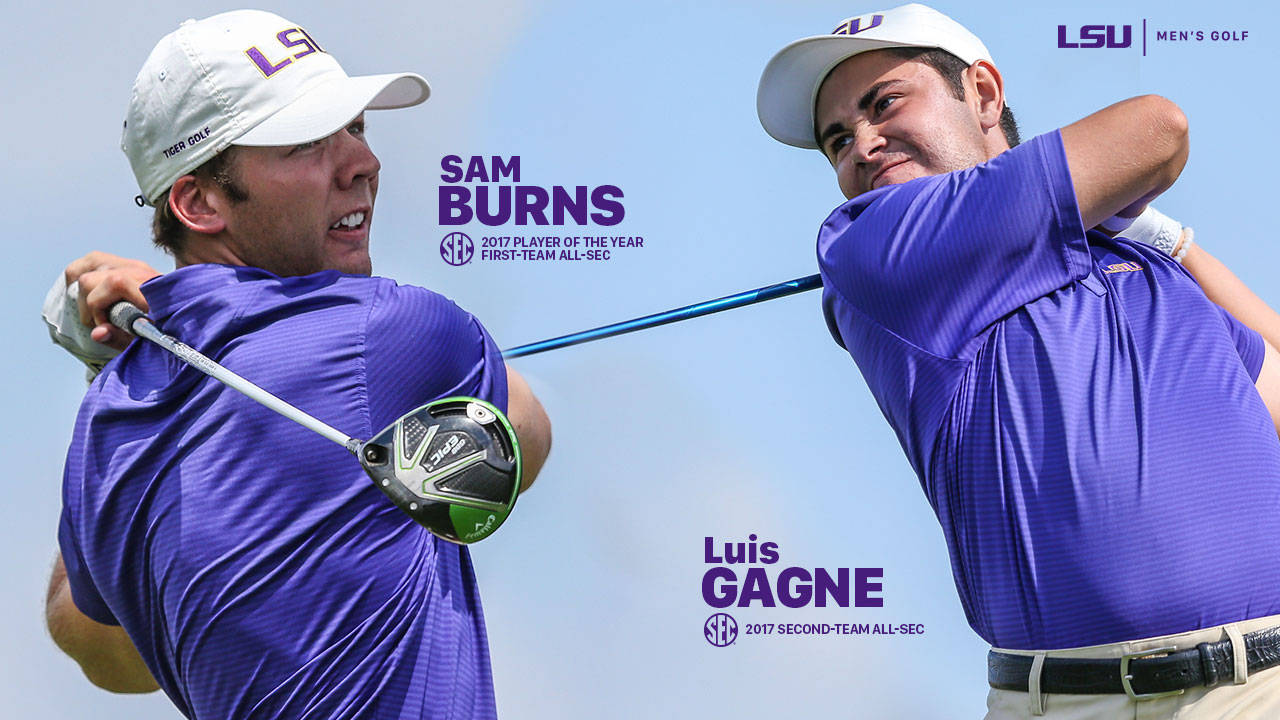 BATON ROUGE – Two members of the No. 3-ranked LSU Men’s Golf team were honored by the Southeastern Conference on Wednesday afternoon as Sam Burns was named the SEC Player of the Year and a First-Team All-SEC performer and Luis Gagne picked up a Second-Team All-SEC selection for the 2016-17 season.

Burns and Gagne both earned their first career All-SEC selections from the league’s head coaches after closing out their freshman seasons a year ago as PING Honorable Mention All-Americans.

Burns is the fifth Tiger in program history to be recognized as the SEC Player of the Year for men’s golf, and the first in 26 years since former All-American Perry Moss received the award in 1991. LSU’s other SEC Players of the Year include John Salamone in 1979, Rob McNamara in 1987 and David Toms in back-to-back seasons in 1988 and 1989.

Gagne’s selection as a Second-Team All-SEC performer for the 2016-17 season makes it six years in seven and eight years in 10 in which at least two LSU golfers have been named to the All-SEC Men’s Golf Team.

Burns remains a candidate for every major award in college golf as a semifinalist for both the Ben Hogan Award and Jack Nicklaus Division I National Player of the Year Award as well as a candidate for the Haskins Award and a recent selection to Team USA’s Arnold Palmer Cup squad. He heads into NCAA Regional play as the No. 2-ranked player in the country in both the Golfstat and Golfweek individual player rankings.

Burns recently ran his streak of top-10 tournament finishes to 13-straight in 13 appearances this season after tying for ninth place at the SEC Men’s Golf Championships two weeks ago. Among his 13 top-10 finishes this year are two wins in LSU’s team events as he was crowned a co-champion of the David Toms Intercollegiate in the fall before also taking the individual title at the Louisiana Classics in Lafayette this spring.

A native of Shreveport, Louisiana, Burns is in the midst of a historic sophomore season at LSU with a team-leading scoring average on 69.69 strokes per round through his 13 tournament appearances. He is a cumulative 62-under par in those 13 previous starts with 29 of his 36 collegiate rounds at par or better during the 2016-17 season.

Gagne has posted a career-low 71.03 scoring average in 13 tournament appearances while earning three top-five, six top-10 and 11 top-20 finishes on the season. He was LSU’s top finisher at the SEC Championships on April 22 where he tied for seventh place on the final leaderboard to push his streak to eight-straight top-20 finishes, including four Top 10s during that span.

Gagne, who hails from Orlando, Florida, has twice been crowned a tournament champion this season as the winner at the Maui Jim Intercollegiate and co-champion at the David Toms Intercollegiate during the fall.

Gagne entered his sophomore season with momentum on his side after advancing to the quarterfinals of match play at the 116th United States Amateur Championship last summer. That capped a freshman year which saw Gagne finish the season as the No. 33-ranked player in college golf in both the Golfstat and Golfweek individual rankings.