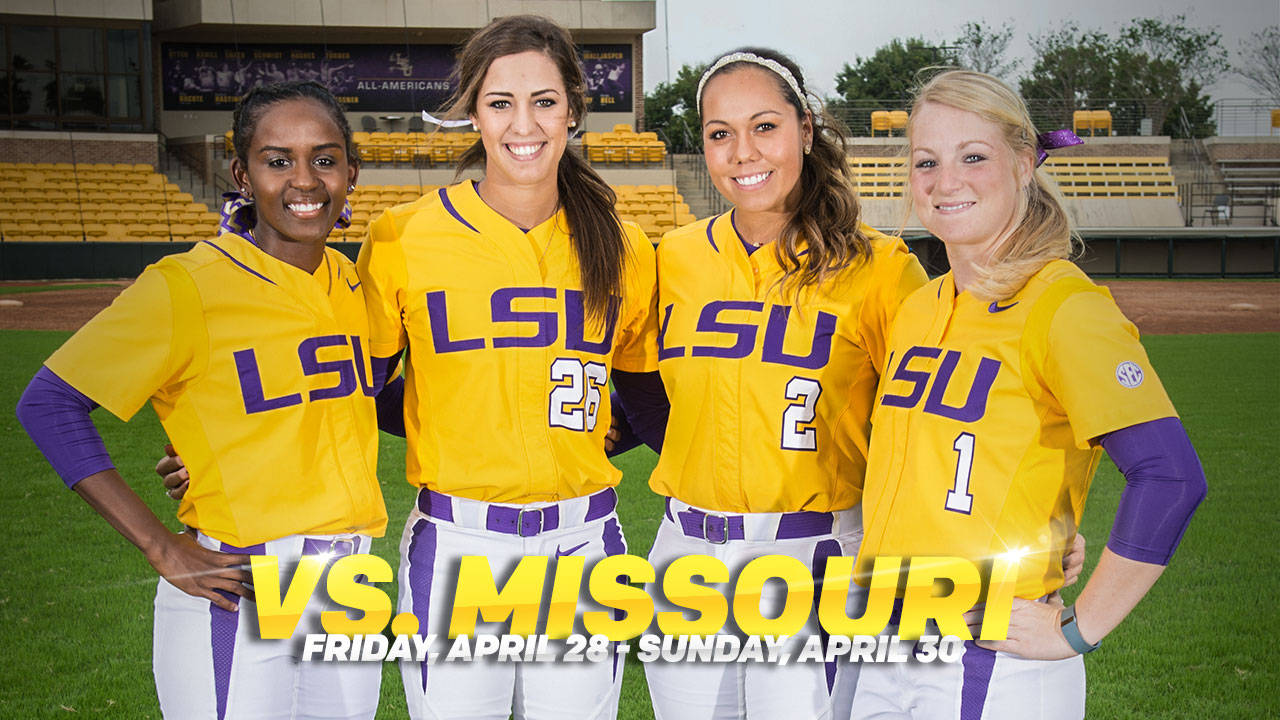 BATON ROUGE, La. – The No. 17 LSU softball team closes out the 2017 home schedule this weekend with a three-game series against the Missouri Tigers this Friday-Sunday at Tiger Park in Baton Rouge.

All three games of the series will get coverage with Friday night’s game streamed online on SEC Network+ and available through WatchESPN and the WatchESPN App with Lyn Rollins and Garrett Walvoord. Game two and three of the series will both air on ESPN with Beth Mowins and Michelle Smith on the call and also available for streaming on WatchESPN.

Fans unable to make the contest will be able to listen to the games on the radio home for LSU softball on Talk 107.3 FM in Baton Rouge and online at LSUsports.net/live.

With it being the final home series of the year, the team will take the time out this weekend to honor its senior class of Constance Quinn, Sahvanna Jaquish, Bailey Landry and Layna Savoie. All will be honored before the games this weekend, with Jaquish on Friday, Landry and Savoie on Saturday and Quinn on Sunday, with a video montage postgame on Sunday that will take place instead of the usual autograph session.

Since the four first donned the Purple & Gold in the 2014 season, the Tigers have ascended to one of the premier softball teams in the nation with back-to-back appearances in the Women’s College World Series in 2015 and 2016, making regionals each of the last three years with a fourth to follow in the coming weeks and being ranked for 45 consecutive weeks dating back to the end of the 2014 campaign.

Between the four, they have played in over 700 games for LSU during their careers combined, averaging over 44 wins per season and hauling in numerous local, conference and national accolades during that time.

The team will look to honor them and the Tiger faithful that have packed into Tiger Park this season with another solid showing, coming off of a 6-0 win over the South Alabama Jaguars this past Tuesday night, closing out non-conference play with another victory. LSU is now 35-14 on the year and will look to pull out another conference series this weekend against Missouri.

Before that game, two of the LSU seniors found out that their softball careers will continue after their playing days in college are finished, as Jaquish and Landry were both selected in the NPF Draft on Monday night. Jaquish was selected third overall by the Chicago Bandits, while Landry was picked fifth overall by the Texas Charge.

LSU’s two leading hitters this season are one and two in batting average on the team with Landry having a .460 average, while Jaquish is hitting .342 with a team leading 45 RBIs and 49 walks.

In the circle, Carley Hoover increased LSU’s shutout total to 13, firing her fourth of the season in the dominant win over the Jaguars Tuesday. She became the third pitcher to reach double figure wins in the circle to go along with Allie Walljasper‘s 12 and Sydney Smith‘s 10, as she also lowered the team’s ERA to 1.56 in the process.

Missouri comes into the series with LSU after getting swept at home by Kentucky over the weekend, as the Black & Gold Tigers have dropped each of their last three conference series’ since taking two of three at Alabama in early April. Missouri is 27-21 overall and 5-12 in the league so far this season.

The two sides have split the last 10 meetings dating back to that fateful super regional showdown in Columbia back in 2012 that LSU won, with Missouri taking two of three the last time the two met in Missouri back in 2015.

Saturday: Bailey Landry, Layna Savoie Senior Tribute – The team will honor seniors Bailey Landry and Layna Savoie before the game, as the first 750 people through the gates at Tiger Park will receive an LSU softball Para Cord Bracelet.

Sunday: Constance Quinn/LSU Managers – The team will honor senior Constance Quinn and its senior managers, while the first 1,000 fans to the game will receive an LSU softball koozie.

“I think they’ve changed a lot, but they still have a lot of the great qualities that they had when they got here. But they’ve definitely matured. They’ve grown in to awesome young women and they are going to be successful with whatever they do with their lives.”

“This team has a great opportunity in front of them, but it’s up to them what they decide to do with it. They have the opportunity to put themselves right where they want to be when they started this season, but it’s going to be up to them on how they decide to attack these games as they go out and play fearlessly. And with some confidence they’ll be in a good spot.”

Enters the contest with an overall record of 27-21, with a 5-12 conference record… Was swept by Kentucky last weekend in Columbia… Have dropped their last three conference weekend series, with the last series win against Alabama… Missouri has played 22 games against ranked teams with three more this weekend in LSU… Are 4-6 in road games this season… Currently hitting .291 as a group with 51 home runs… Leading hitter is Kirsten Mack with a .357 average, with Braxton Burnside leading the team with 49 hits… Pitching staff has an ERA of 3.21 with nine shutouts and opponent batting average of .272… Cheyenne Baxter has a 14-6 record and a 2.18 ERA to lead the pitching staff.

LSU closes out the 2017 regular season next weekend with a three-game series against the South Carolina Gamecocks in Columbia.