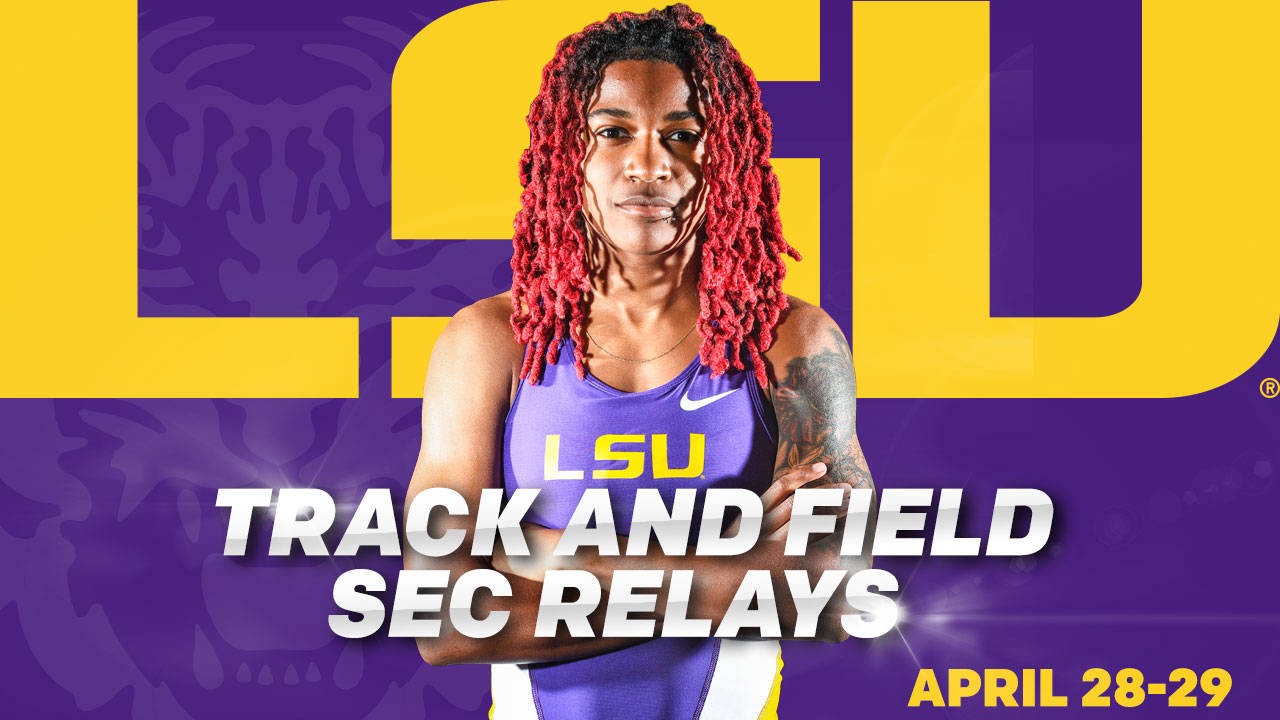 BATON ROUGE – The Bernie Moore Track Stadium will be the site of the most exciting relays meet on the collegiate calendar this weekend as the LSU Track & Field program plays host to a field of nine Southeastern Conference programs at the inaugural SEC Relays being held on Friday and Saturday in Baton Rouge.

Admission is free at the Bernie Moore Track Stadium on both days of the meet as fans will see LSU square off against the likes of visiting Alabama, Auburn, Kentucky, Mississippi State, Ole Miss, Tennessee, Texas A&M and Vanderbilt for the combined team championship on the line this weekend.

Friday is Student Point Night as the first 100 students in attendance get free crawfish while all students attending the opening day of the meet with a valid student I.D. will be rewarded with valuable priority points that can be used for the future purchase of football tickets. Saturday is “Running Club Day” at the Bernie Moore Track Stadium as the first 200 fans in attendance receive free arm bands.

While the meet opens Friday at 3 p.m. CT with the early field events, the sprint medleys kick off the relays portion of the meet beginning at 5:30 p.m. Friday’s events run through approximately 8:45 p.m.

The inaugural SEC Relays continues Saturday at 10:30 a.m. with the first field events of the day followed by the first relay finals of the day at 12:02 p.m. after a brief opening ceremony. The SEC Relays Champion is to be crowned following the running of the men’s 4×400-meter relay at approximately 2:30 p.m. with a special awards ceremony held on the gold sprint track on the infield.

The men’s and women’s scores for each university competing in the meet will be combined following Saturday’s events to determine the school earning the title of SEC Relays Champion in the inaugural event.

Seven relays on the track factor into the team scoring, including the 4×100-meter, 4×200-meter, 4×400-meter, 4×800-meter, sprint medley, distance medley and shuttle hurdle relays. In addition, field events are scored as relays with a jumps relay and throws relay included in the events program. The best mark for each school in the high jump, pole vault, long jump and triple jump will be added together for one cumulative distance to determine the winner of the jumps relay. A school’s top marks in the shot put, discus, hammer and javelin will be factored in the throws relays.

The awards stand for #SecRelays is ready for champions to be crowned! pic.twitter.com/l7p1bEn8GS

SEC in the National Rankings

The very best teams in collegiate track and field will be in Baton Rouge this weekend as six of the eight men’s teams and seven of the nine women’s teams enter the inaugural SEC Relays ranked among the Top 25 with this week’s national power rankings released Monday by the U.S. Track & Field and Cross Country Coaches Association.

Texas A&M lines up with the No. 1-ranked team in the country as a national championship contender on both the men’s and women’s sides. The women’s field at the SEC Relays features three of the top-four and five of the top-10 teams nationally as No. 3 Arkansas, No. 8 Kentucky and No. 10 Alabama are joined by No. 17 Ole Miss, No. 23 Tennessee, Mississippi State and Vanderbilt. Rounding out the men’s field this week are No. 5 Alabama No. 15 Arkansas, No. 17 Ole Miss, No. 21 Tennessee, Kentucky and Mississippi State.

All event winners at the inaugural #SECRelays will take home one of these commemorative watches! A team champion will also be honored! pic.twitter.com/cSB2Jf7lOv

Not only does LSU line up the defending men’s and women’s NCAA Champion 4×100-meter relay teams this spring, but the Tigers and Lady Tigers both head into their regular-season finale with the SEC’s leading sprint relays once again in 2017. Both ran their seasonal bests at the Mt. SAC Relays on April 15 where the Tigers ran 38.57 seconds and the Lady Tigers ran a school record of 42.12.

Running the NCAA-leading time for the Tigers at the Mt. SAC Relays were sophomore Donte Jackson, senior Nethaneel Mitchell-Blake, senior Tremayne Acy and sophomore Jaron Flournoy as their best of 38.57 for the 2017 season was also the eighth-fastest time in school history.

The Lady Tigers, who were crowned the SEC Indoor Champions in the women’s 4×400-meter relay back in February, also have the SEC’s top time outdoors after sophomore Rachel Misher, Martin, junior Kymber Payne and senior Travia Jones clocked a seasonal best of 3 minutes, 29.10 seconds at the LSU Alumni Gold meet last Saturday. Their time ranks No. 6 on the national list ahead of the SEC Relays. Other top-10-ranked women’s 4×400-meter relay teams running this weekend include Texas A&M (3:29.18) at No. 7 and Kentucky (3:30.24) at No. 8).

After wrapping up the regular season by hosting the inaugural SEC Relays this weekend, LSU’s squads will make the trip to Columbia, South Carolina, in two weeks for the 2017 SEC Outdoor Track & Field Championships running May 11-13 at Weems Baskin Track. The championship season continues May 25-27 with the NCAA East Preliminary Rounds being held at the University of Kentucky.

The semifinal and final rounds of the 2017 NCAA Division I Outdoor Track & Field Championships return to Hayward Field in Eugene, Oregon, again this year as the finale of the collegiate season follows June 7-10.