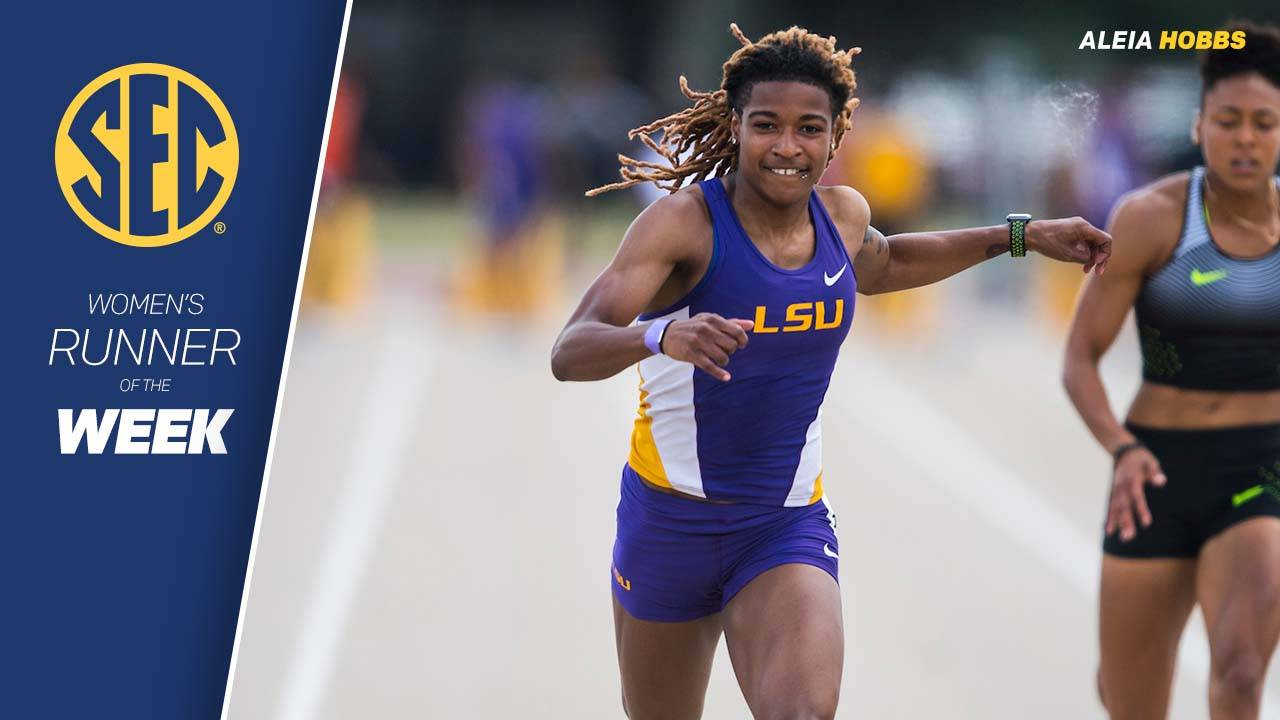 BATON ROUGE – An LSU athlete was announced the SEC Women’s Runner of the Week for the fourth week in a row Tuesday after junior Aleia Hobbs picked up the honor for the third time this month following her SEC-leading 100-meter dash at the LSU Alumni Gold meet at the Bernie Moore Track Stadium on Saturday.

Hobbs won the award for the first time on April 11 following her then-NCAA-leading 100 meters at the Battle on the Bayou and again with teammates Mikiah Brisco, Kortnei Johnson and Jada Martin last week after the foursome set an SEC record in the 4×100-meter relay at the Mt. SAC Relays.

In all, nine different LSU athletes have now been rewarded with 10 SEC Track & Field Athlete of the Week selections by the conference office between the indoor and outdoor seasons in 2017.

Hobbs dropped her SEC-leading time in the 100-meter dash at the LSU Alumni Gold on Saturday to a career-best wind-aided time of 11.06 seconds as she edged junior teammate Mikiah Brisco for the title at the Bernie Moore Track Stadium. Hobbs’ seasonal best moved her into a tie for the No. 2 spot in the NCAA all-conditions rankings with Oregon’s Ariana Washington.

Her wind-aided 11.06w also eclipsed her previous all-conditions career best as she entered the meet with a seasonal-best wind-legal time of 11.07 from the Battle on the Bayou held on April 8. Brisco followed Hobbs across the finish line with a seasonal-best wind-aided time of her own at 11.12 with a tailwind of +2.3 meters per second to move to No. 7 in the NCAA rankings this season with her performance. Texas’ sophomore All-American Teahna Daniels finished well back in third place with a time of 11.18w, followed by former LSU national champion and two-time U.S. Olympian Muna Lee in fourth place at 11.31w.

Hobbs and the rest of her LSU teammates are ready to wrap up the regular season this weekend as they play host to the SEC Relays on Friday and Saturday at Bernie Moore Stadium. They then open the championship season with a trip to Columbia, South Carolina, for the 2017 SEC Outdoor Track & Field Championships being held May 11-13 at Weems Baskin Track.