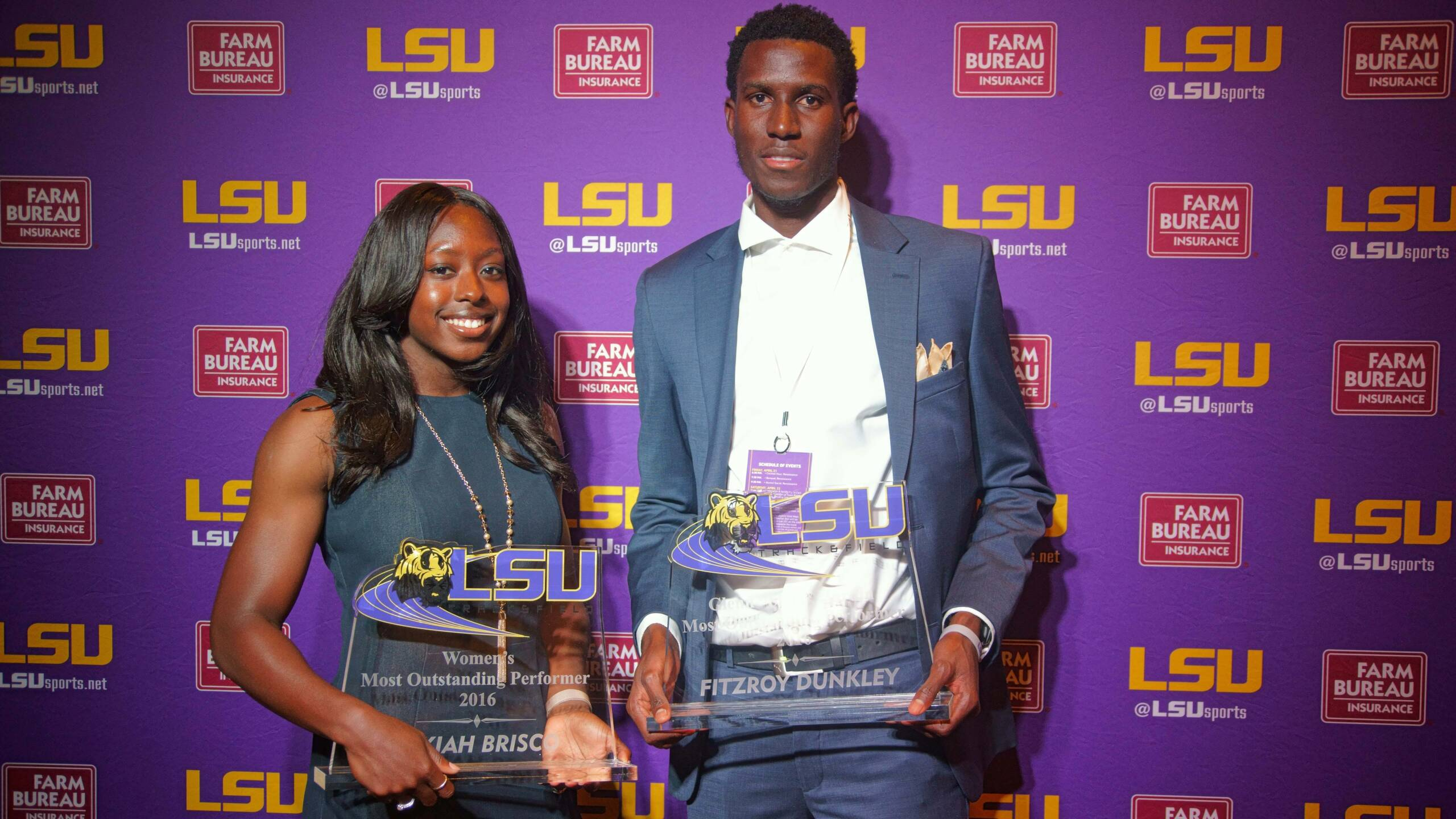 BATON ROUGE – The LSU Track & Field program held its seventh-annual Team Awards and Alumni Recognition Banquet on Friday night at the Renaissance Baton Rouge Hotel in which 19 student-athletes received awards for their performance in competition, in the classroom and in the community during the 2015-16 athletic season.

The LSU Track & Field Team Awards and Alumni Recognition Banquet has been established to not only recognize the current members of the program for their performance in the past year, but also honor the alumni who have laid the foundation of success still enjoyed by the program today.

Awards were presented to members of the program for their outstanding performance during the 2015 and 2016 cross country seasons as well as the 2016 indoor and 2016 outdoor track and field seasons while leading the Tigers and Lady Tigers in all aspects of the program.

Highlighting the festivities on the night was a celebration of the LSU’s “Decade of the Dynasty” when the Lady Tigers brought home a staggering 19 NCAA team championships between the indoor and outdoor seasons from 1987-97. That included an unprecedented 11-straight national titles won at the NCAA Division I Outdoor Track & Field Championships, a streak that will surely never be broken in the sport.

Proud to have so many of these women from the #DecadeOfDynasty back with us at tonight’s team banquet! #LSU #Legends pic.twitter.com/Suu8wI7rpz

“What a special event this has become for our program each and every year as we continue to celebrate our history, while also recognizing those still on our team who carry that standard of excellence with them,” said LSU head coach Dennis Shaver. “We’re especially proud to have so many women from that ‘Decade of the Dynasty’ come back and be recognized for what they accomplished. We’ll likely never see an era like that with our sport, or any sport, so it’s great to get so many of them together again. They hold such a special place in the history of college athletics.”

The awards portion of the banquet was capped by Olympic Silver Medalist Fitzroy Dunkley and junior Mikiah Brisco claiming the Most Outstanding Performer of the Year awards for the men’s and women’s teams.

Dunkley won The Glenn “Slats” Hardin Most Outstanding Performer Award for the first time following a senior season in 2016 in which he was twice crowned an NCAA Champion in the 4×400-meter relay and the NCAA Outdoor Silver Medalist in the 400 meters before making his Olympics debut with Jamaica in Rio de Janeiro last summer. That’s where he scored a silver medal as part of Jamaica’s mile relay team on the final day of the Rio Games after lining up in the first round of 400-meter qualifying earlier in the event.

Hardin is a true American track and field legend as he was the world’s premier 400-meter hurdler in the first half of the 20th century. He set the world record in the event three times during his career with his best time of 50.6 seconds standing as the world record for 19 years from 1934-53.

After winning a silver medal in the 400 hurdles at the 1932 Olympic Games in Los Angeles, California, Hardin won the gold medal at the infamous 1936 Olympic Games in Berlin, Germany. He remains the only LSU Track & Field athlete to win an Olympic gold medal in an individual event in the history of the sport.

Not only was Dunkley honored with The Glenn “Slats” Hardin Award to close the evening, received the Men’s Most Improved Athlete Award for his progress between the 2015 and 2016 seasons and shared the Men’s L Club Team Captain Award with fellow former Tiger Cyril Grayson, who won four NCAA relay titles during his collegiate career from 2013-16.

Brisco was named the winner of the Women’s Most Outstanding Performer of the Year award for the first time in her Lady Tiger career following a 2016 season in which she was crowned an NCAA Champion as leadoff for LSU’s 4×100-meter relay team along with three other All-American performances during her sophomore season.

Brisco teamed with Kortnei Johnson, Jada Martin and Rushell Harvey to win the program’s 14th NCAA title all-time in the 4×100-meter relay while setting a Hayward Field record of 42.65 seconds in the national final last June. She also placed fifth in her first NCAA final in the 100 meters after earning the title of NCAA Indoor Bronze Medalist in the 60 meters and placing fifth nationally in the 60 hurdles during the 2016 indoor season.

A Baton Rouge native, Brisco first emerged on the national stage at the SEC Indoor Championships a year ago while winning the Cliff Harper Trophy as the top individual point scorer of the meet as she became the very first Lady Tiger in the program’s history to sweep SEC Indoor titles in the 60 meters and 60 hurdles in the same season.

The Women’s Most Outstanding Performer of the Year award was dominated by Kimberlyn Duncan from 2011-13 as the seven-time NCAA Champion earned the award three times while LaTavia Thomas (2010), Jasmin Stowers (2014) and Tori Bliss (2015) have also been recognized as recent winners.

Brisco was twice called to the stage for recognition during the award’s ceremony as she also collected the trophy for Women’s Most Outstanding Track Athlete thanks to her performance during the 2016 season.