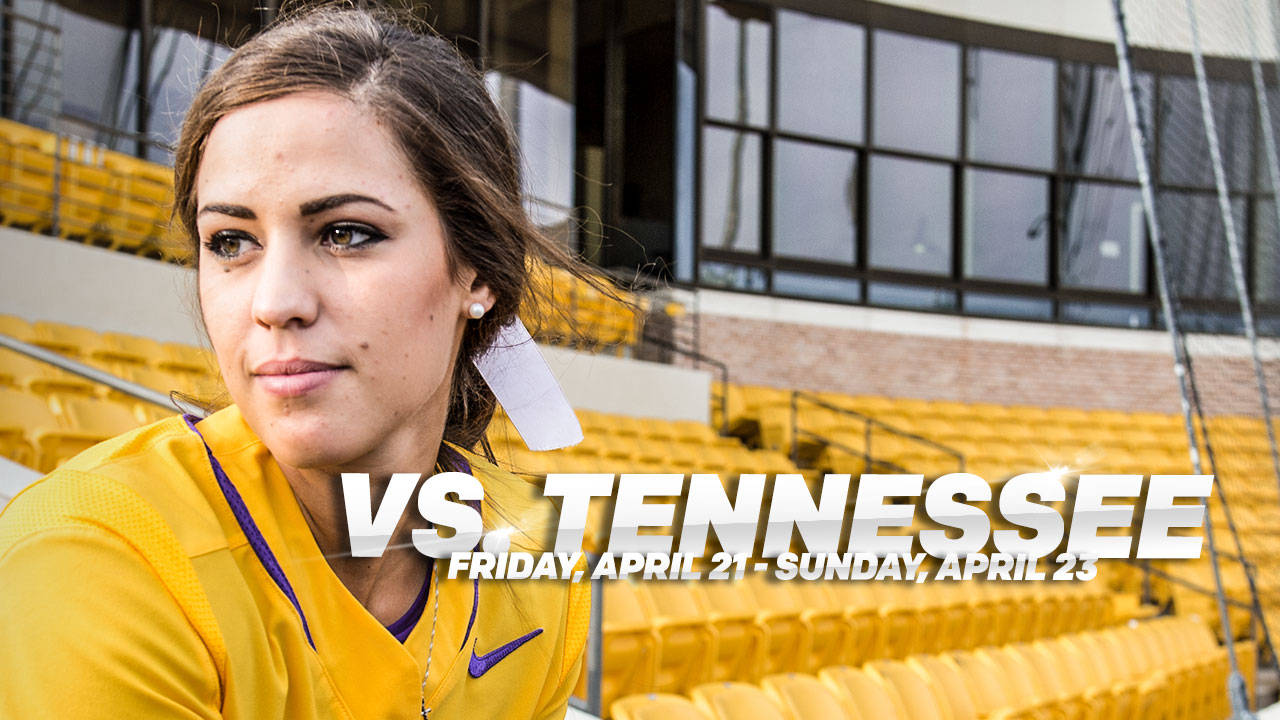 BATON ROUGE, La. – The No. 16 LSU softball team returns to SEC play this weekend, hosting the No. 11 Tennessee Volunteers for a three-game series in Baton Rouge this Friday-Sunday at Tiger Park.

All three games of the series will be streamed online via SEC Network+, which is available through WatchESPN and the WatchESPN app. Lyn Rollins and Yvette Girouard will be calling the action on Friday and Saturday, with Sunday’s game being televised on the SEC Network with Courtney Lyle and Leigh Ross Dakich.

Patrick Wright will have the call of all three games on Talk 107.3 FM in Baton Rouge, with free audio available at LSUsports.net/live. Live stats of the game will also be available on the front page of LSUsports.net.

The Tigers head into the contest with some confidence after the team snapped its four-game losing streak on Tuesday with a 5-2 victory over the Northwestern State Lady Demons in Baton Rouge. LSU scored two runs in the third and fourth innings and got an insurance run late in holding off the visitors in the end to improve to 33-12 on the year.

Tiger Park has been kind to the group again this season, as LSU comes into the game with a 23-2 overall record at home this season, with a 6-0 mark against league opponents. The team will look to make up some ground in the conference standings this weekend, sitting at 8-7 overall after a tough two-week stretch at Alabama and Ole Miss where the team only took one of six total games.

Senior Bailey Landry continues to lead the team at the plate with her .483 average and 71 total hits. She’s 20 shy of matching her career high from 2015 and well above her .421 average as she is still on pace to shatter the all-time single-season record of .431.

Right behind Landry in hits is junior Emily Griggs, who accounted for two of LSU’s six hits in the game, both coming on doubles, as she is hitting .308 with 45 hits and 32 runs scored which are both second on the squad.

Earning the win in the circle and becoming the second player this season to hit double-digit victories in the circle was Sydney Smith, improving to 10-3 on the year, lowering her ERA to 1.51 in the process. The LSU pitching staff as a whole lowered its ERA to 1.47 after the win on Tuesday, pitching 11 shutouts with opposing teams hitting just .175.

Allie Walljasper stands at 11-3 with 11 complete games, while Carley Hoover has a 0.95 ERA with 121 strikeouts and an opponent batting average of .133.

No weekend is ever easy in the SEC, but the Tennessee team coming in is arguably its hottest as the Vols are 39-5 on the season and 11-3 against the league. Tennessee has won 18 consecutive games coming into the weekend series against LSU and currently tied for second place, holding a 28-25-1 advantage in the all-time series history against LSU.

The two sides have split each of the last 10 meetings against one another, with LSU needing an extra-inning thriller to advance in last year’s conference tournament in Starkville.

Friday: Pack the Park/Girl Scouts Game – The first 500 fans through the gates of the park will receive a Women’s College World Series lapel pin, as all members of the Girl Scouts will be able to run the bases post game.

Saturday: Bark in the Park – All dogs are welcome at Tiger Park where fans who bring their dogs to the park can purchase $2 general admission tickets with hot dogs being sold at the game for $1.

Sunday: Geaux Play Day – Members of the Miracle League of Baton Rouge will be on hand and will get to play a game on the field at the end of the day. Fans will also be able to pick up their 2017 LSU softball trading cards as well upon entry

“I definitely believe we need to send a message. Hopefully the message that we can come out, play the best softball that we have available to us this weekend and hopefully that’s enough.

LSU will take on its final non-conference opponent of the 2017 regular season, hosting the South Alabama Jaguars at 6 p.m. Tuesday evening.