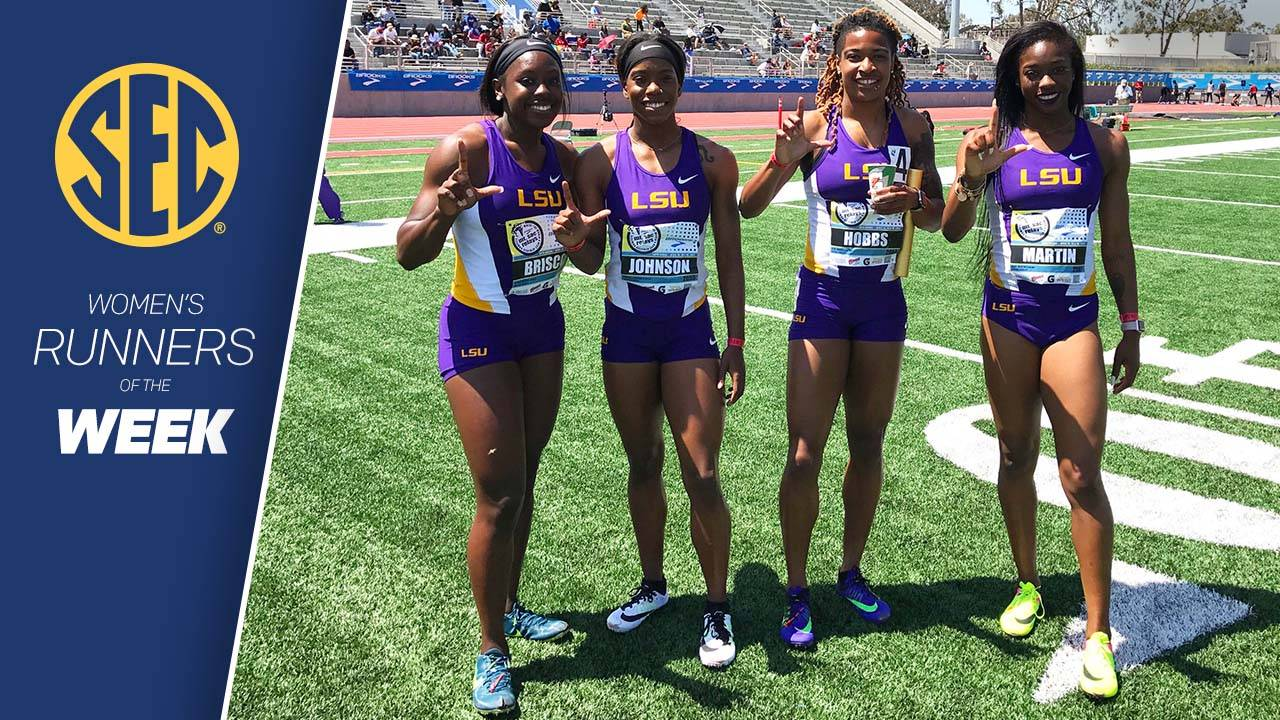 BATON ROUGE – The members of LSU’s record-setting 4×100-meter relay team have been named the SEC Women’s Runners of the Week and freshman runner Ruby Stauber has picked up a third selection as the SEC Women’s Freshman of the Week this season with their performance at the Mt. SAC Relays on Saturday.

That’s where the Lady Tigers blew away their 28-year-old school and SEC records with the second-fastest women’s sprint relay in collegiate history to close out the 59th Mt. SAC Relays at Murdock Stadium.

Junior Mikiah Brisco, sophomore Kortnei Johnson, senior Jada Martin and junior Aleia Hobbs arrived at the Mt. SAC Relays with confidence following their seasonal-best performance at LSU’s Battle on the Bayou only a week ago as they ran the second-fastest time in the NCAA this season at 42.66 seconds.

They still lined up in Saturday’s women’s invitational 4×100-meter relay as second favorites with collegiate-record holder Oregon also in the race with a best of 42.34 from the Florida Relays two weeks before.

LSU’s women ran stride-for-stride with the Ducks in the fastest relay race in collegiate history as Oregon broke its own NCAA record with a winning 42.12 followed by the Lady Tigers in second place with a school record of 42.14. Those watching might not have even realized there were four other teams in the race as a team from the Altis training center in Phoenix, Arizona, was well back in third with a time of 43.82. The Fearless Flyers followed in fourth at 44.47 ahead of UNLV (44.66) and Ole Miss (44.73).

LSU’s own SEC record of 42.50 stood for 28 years when a team of Tananjalyn Stanley, Dawn Sowell, Cinnamon Sheffield and Esther Jones last set the standard during their national championship season back in 1989.

Saturday’s finale at the Mt. SAC Relays saw Stauber, an indoor All-American, run her first 800-meter race outdoors as she clocked a heat-winning 2 minutes, 3.77 seconds to finish seventh overall and second among the collegians in the field in the women’s invitational race. Stauber established herself as an All-American candidate outdoors in her season debut as she ranked No. 2 in the SEC behind Texas A&M’s Jazmine Fray and No. 6 in the NCAA rankings coming out of the weekend.

Stauber’s 2:03.77 opener is also the fastest 800-meter time in the country by a freshman by well over one second as Penn State’s Danae Rivers follows as the second-fastest freshman with a time at 2:04.99 this season. Stauber has already enjoyed an All-American rookie season with the Lady Tigers after finishing fifth nationally in her debut appearance at the NCAA Indoor Championships in March.

A native of Plymouth, Minnesota, and product of Wayzata High School, Stauber is the SEC Women’s Freshman of the Week for a third time after also receiving the honor twice indoors on Jan. 17 and Feb. 14.