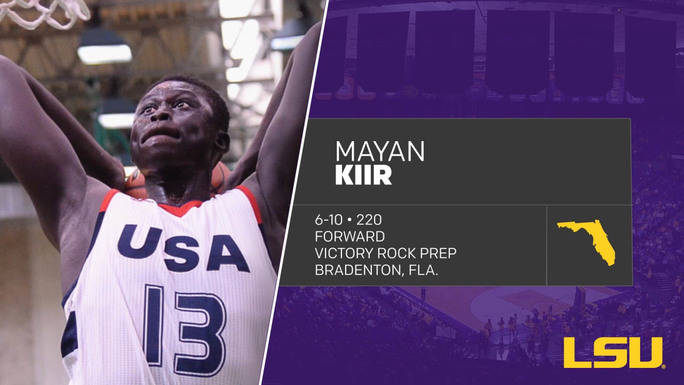 BATON ROUGE – Coach Will Wade has his first signee as the head coach of the LSU Tigers as the LSU Athletic Department has received and confirmed the national letter-of-intent papers from Mayan Kiir, a 6-10 power forward from Victory Rock Prep in Bradenton, Florida.

“We are happy to have Mayan Kiir as an LSU Tiger,” said Coach Wade. “He has tremendous upside after a high school and AAU career in which he was extremely well-coached in a system that is similar to what we will have here at LSU. He’s got good range. He’s tremendous on the offensive and defensive boards. He’s terrific defensively and we look forward to him joining our team for the coming season.”

Kiir, who was ranked 95th on ESPN’s 2017 recruiting list as a four-star recruit, is ranked by Scout as the 15th best power forward in the class of 2017.

Kiir is a native of South Sudan who lived in Melbourne, Australia, before playing the past four seasons at Victory Rock. He averaged 13.4 points and 8.2 rebounds a game and added 2.3 assists and 1.6 blocks. He shot 54.6 percent from the field and 71.1 percent from the free throw line. Victory Rock was 27-8 this past season under Coach Loren Jackson.

He represented Team Australia at the Adidas Nations Tournament, where he averaged 11 points and seven rebounds per game. He also has experience playing for Team USA at the Adidas Eurocamp.