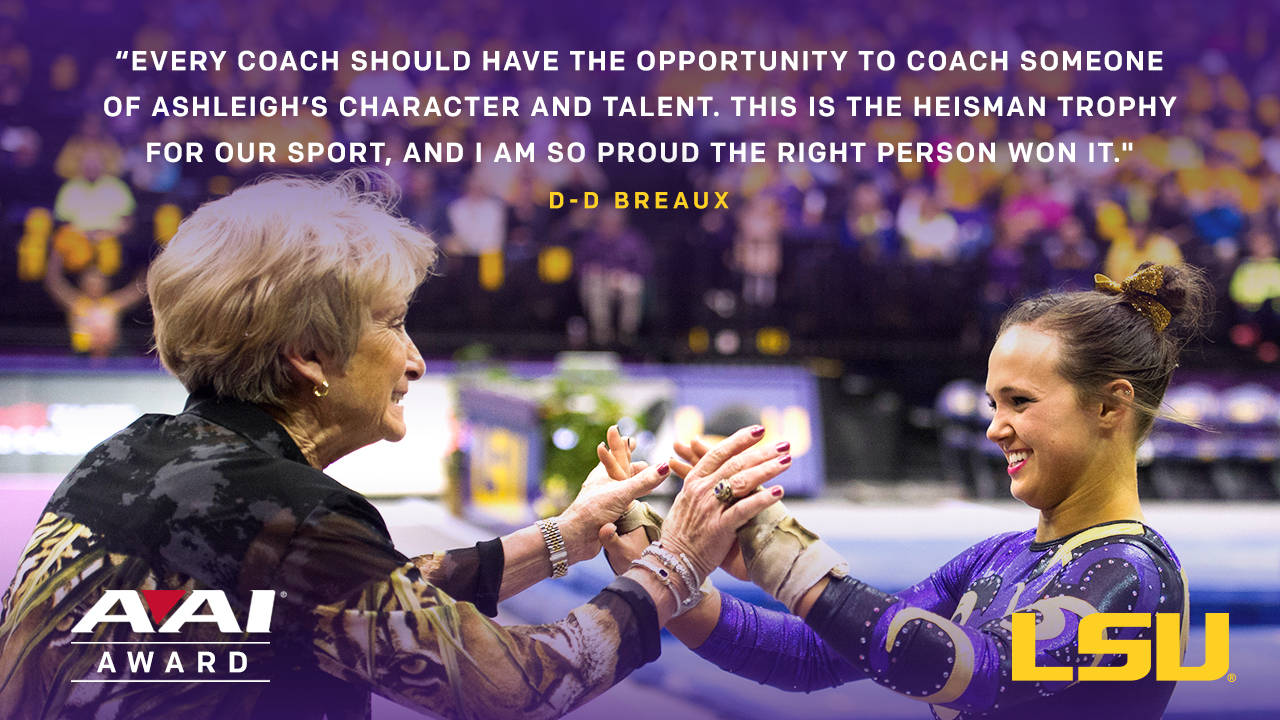 ST. LOUIS – LSU gymnastics senior Ashleigh Gnat has been named the 2017 AAI Award winner, it was announced Wednesday night during the team banquet prior to the NCAA Championship. Gnat is the second LSU gymnast in school history to win the award, which is given to the best senior gymnast in the country.

“The fact that our peers voted on absolutely the right person was amazing,” head coach D-D Breaux said “Every coach should have the opportunity in their lifetime to coach someone of her character and talent. She epitomizes what every student-athlete should be. I’m so proud that she can bring this award to our university. This is the Heisman trophy for our sport, and I am so proud the right person won it.”

The winner is voted on by the nation’s coaches and considered the highest honor of women’s gymnastics. Gnat joins three-time NCAA Champion Susan Jackson as the only winners in school history.

“It’s a huge honor to be considered for this award,” Gnat said. There are so many talented girls in the NCAA. It’s an honor to represent LSU that way. They have provided every opportunity, and I am just thankful to be part of this team and this organization. I’m very proud of this, but we still have a lot of work to do and our main goal is still ahead of us this weekend.

Gnat has been at the forefront of LSU’s ascension to one of the top gymnastics programs in the country. A vocal senior leader, Gnat led the program to a historic sweep of the Southeastern Conference championships in 2017.

The Lake Mary, Florida native is a three-event specialist who took home the SEC vault, beam and floor exercise championships at the conference meet in March. Gnat’s three event titles tied Rheagan Courville (2014) for the most by an LSU gymnast at the SEC meet in school history

Gnat owns nine perfect 10.0 scores for her career, which is tied with Jennifer Wood for the most in school history. At the NCAA Lincoln Regional, Gnat captured the floor title with a 9.95 for her 11th floor title of the season. The title set a new school record for the most in a single season.

Gnat ended her senior season ranked No. 1 on vault, No. 4 on floor and No. 8 on beam to push her total All-America honors to 14. The mark tied her for the second most in school history.

In LSU’s career titles rankings, Gnat sits at No. 5 on floor with 22 titles, No. 6 on vault with 22 titles and No. 7 on beam with 12 titles. Gnat also ranks eighth in school history with 61 total titles.

In addition to her success in the gym, Gnat is also an outstanding student and member of the Baton Rouge community.  Gnat has been a part of three-straight Tiger Cup wins, which is awarded to the LSU team that owns the highest team GPA along with the most community service hours.

She is a three-time SEC Academic Honor Roll member and was named an Academic All-American in 2016. Gnat will graduate in May 2017 with a degree in sports administration.