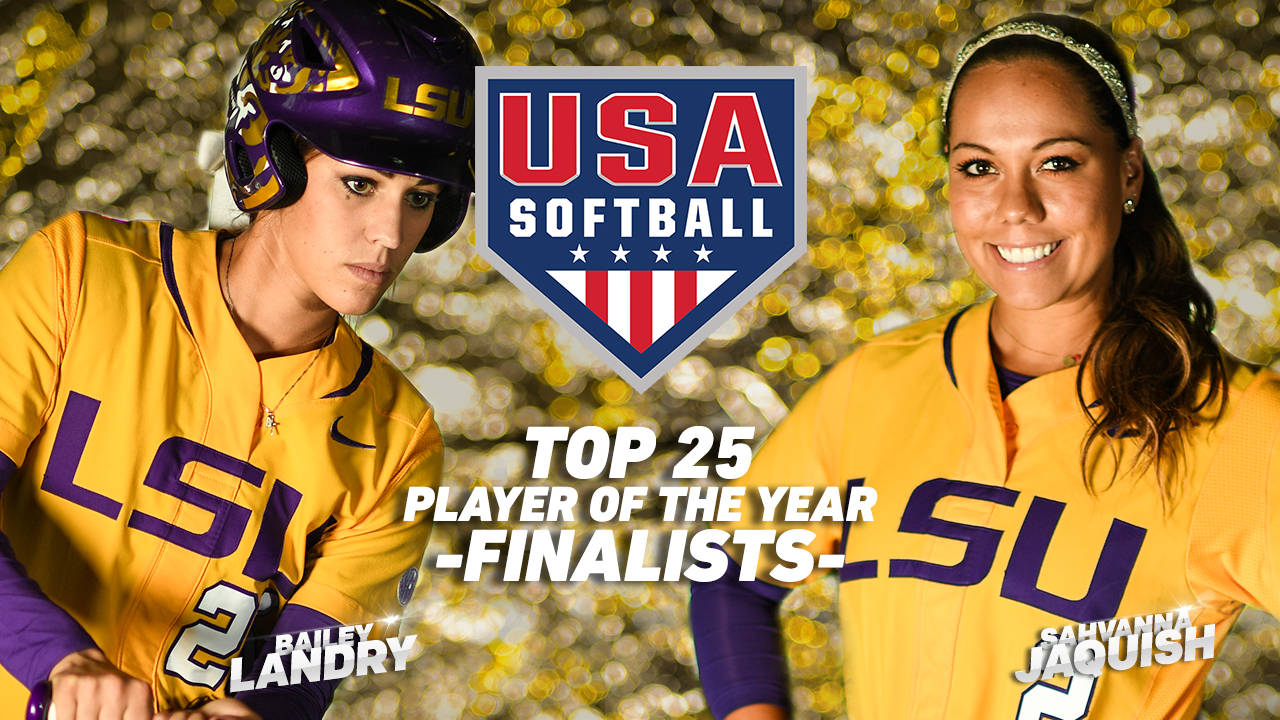 BATON ROUGE, La. – LSU seniors Sahvanna Jaquish and Bailey Landry have been named as two finalists for the 2017 USA Softball Collegiate Player of the Year Award the national governing body for the sport in the United States announced Wednesday.

The USA Softball Collegiate Player of the Year award, which is considered the most prestigious honor in Division I women’s collegiate softball, recognizes the outstanding athletic achievement by Division I female players across the country.

Landry, hailing from nearby Prairieville, Louisiana, currently leads the Tigers with a .515 batting average and 69 total hits. Both of those marks are tops in the nation, as she also ranks fourth in the country in triples with six, sitting 14th in on-base percentage and 17th in triples per game.

This season Landry nearly tied her own school hitting streak record, finishing a hit shy by recording a base knock in 20 consecutive games. The streak tied for the longest in the SEC this season, as on the year she has 21 multi-hit games, including being the only player with four hits in a contest this year, sitting with 76 for her career.

Earlier this season Landry was named the SEC, NFCA and espnW National Player of the Week after she led the team at the plate hitting .813 with a 1.375 slugging percentage, .778 on-base percentage and 10 RBIs in the second week of the season. She had multiple hits in four of the five games on the week, including hitting two doubles, two triples and a home run to finish the week 13-for-16 with seven runs scored.

Hailing from Highland, California, three-time All-American Jaquish leads the team with 42 RBIs and walks with 37, sitting second overall in batting average with a .362 mark and home runs with six. She is slugging .600 with a .541 on-base percentage, tying Landry for the team lead in doubles with seven, stealing five bases in starting all 41 games this season.

One of the most feared hitters in the SEC over the course of her career, Jaquish has been walked no less than twice 11 times, including getting walked a school record-tying four times in the opener against Alabama last Friday. In that same series she was walked a total of seven times, the most in a three-game stretch this season, two shy of the nine she had over the course of seven games this year.

Jaquish leads the team with 14 multi-RBI games and has 74 for her career which is 12 more than the previous school record, which she broke after the first two weeks of the season. She’s brought in a least three runs five times this season, the most for any Tiger, driving in a season-high five in the opener against Mississippi State two weeks ago.