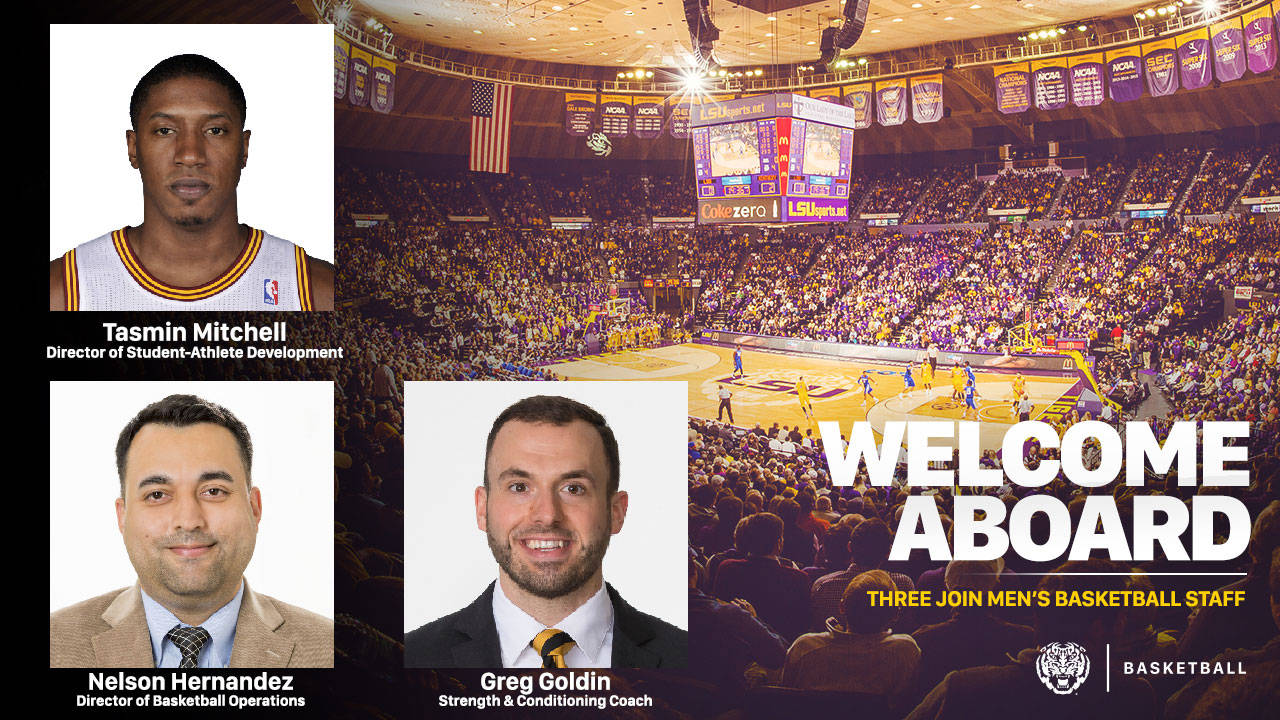 Both Hernandez and Goldin are joining Coach Wade from the staff at VCU.

“The addition of Tasmin, Nelson and Greg allows us to take several steps forward in the building of our staff here at LSU,” said Coach Wade. “It is very exciting to have a former LSU player of Tasmin Mitchell’s reputation join our staff. He will work closely with our players and his knowledge of the LSU program is very important to us. I am pleased that Nelson and Greg could join us here at LSU and their additions will also help to continue to move our program in the proper direction.”

Mitchell, who was the 2017 SEC Basketball Legend representing LSU at the SEC Basketball Tournament, played for the Tigers from 2005-10. He is just one of nine players in LSU history to start on two SEC Championship teams (2006, 2009) and helped the Tigers reach the 2006 NCAA Final Four. He finished his career third all-time at LSU in scoring (1,989), sixth in rebounds (950), fifth in field goals made, eighth in steals and 10th in assists.

In the present era of NCAA statistics, he is one of just three Tigers (joining Clarence Ceasar and Jerry Reynolds) to have 1,000 points, 500 rebounds, 200 assists and 100 steals in a career.

Mitchell, a native of Denham Springs, Louisiana, played several seasons of professional basketball both in this country and abroad, before spending the last year back in his hometown.

Mitchell, age 30, graduated from LSU with a degree in Communications Studies in 2010.

Hernandez served this past season (2016-17) as the director of operations at VCU. Prior to that he served a one-year stint (2015-16) as a director of player development and an administrative assistant at Wright State and was video coordinator at Clemson (2014-15). He spent four seasons (2010-14) as the video coordinator at Utah State. Hernandez spent the 2009-10 season as assistant coach for Salt Lake Community College in Salt Lake City, Utah.

The Brooklyn, New York native was the founder, CEO and director of the Native American Youth to Elder Foundation (NAYEF)/Warrior Elite Basketball from 2004-10. Hernandez partnered with NBA legend Magic Johnson to promote healthy living, education, drug prevention and inspire youth to greatness through basketball. The organization reached over 75,000 youth throughout the years.

Hernandez in 2011 assisted in the production and creation of the award-winning basketball documentary about future Louisville women’s basketball guards Shone and Jude Schimmel called “Off the Rez” which premiered at the Tribeca Film Festival in New York City and eventually made its way to the television screens of TLC and ESPN during the Women’s Final Four in 2013.

Goldin served with Coach Wade both at Chattanooga and VCU before joining his staff at LSU. He also served as strength and conditioning coach under Steve Prohm at Murray State during the 2012-13 season.

Goldin has worked hand-in-hand with Coach Wade at both of his previous stops to integrate technological advancements in player wellness in the weight room, the court and in all facets of the player’s life including sleep studies and nutrition. His strength and conditioning routines are built to suit the aggressive style of play that is planned to be implemented at LSU like what has been played at VCU and Chattanooga under Wade.

A native of Ilion, New York, the 28-year-old Goldin is a 2011 graduate of Canisius College, where he received a degree in health and physical education, as well as health and human performance. Goldin married the former Meredith Mullins in June, 2016.