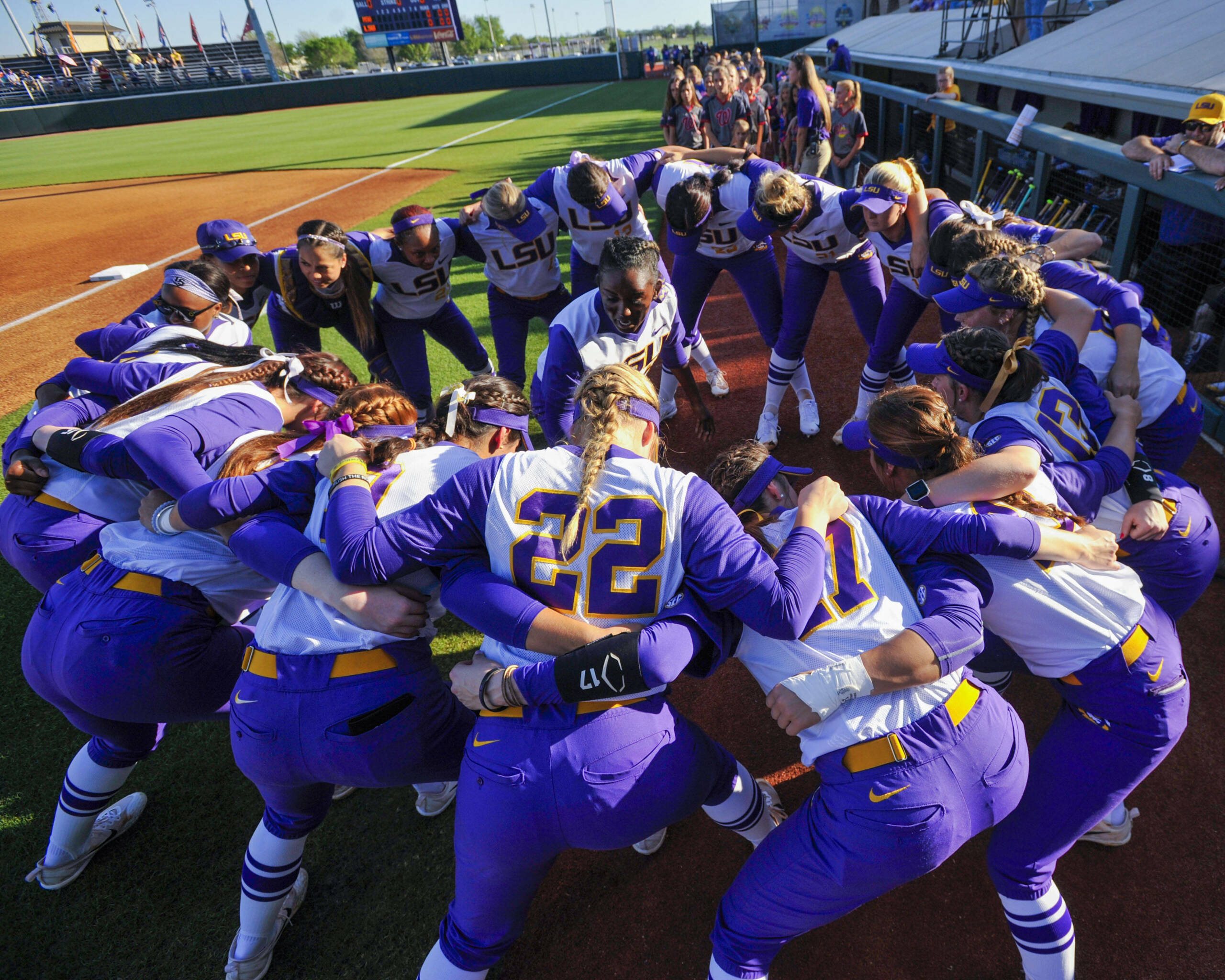 BATON ROUGE, La. – The No. 8 LSU softball team will open a stretch of seven games on the road this weekend, traveling to take on the No. 12 Alabama Crimson Tide in a three-game series in Tuscaloosa beginning Friday evening.

The three-game set gets underway on Friday at 6:30 p.m. in Alabama, with Saturday’s game beginning at 8 p.m. and the finale on Sunday at 2 p.m. All three games will have coverage with SEC Network+ carrying game one, the SEC Network airing game two and ESPN2 having the finale with Mark Neely, Michelle Smith and Holly Rowe on the call.

Talk 107.3 FM in Baton Rouge will carry all three games with Patrick Wright calling the action, as fans can listen locally on the radio, on anywhere online for free at LSUsports.net/live. Links to live stats will also be available at LSUsports.net.

Winners of nine-straight, the Tigers go into a top 15 matchup against Alabama sitting third overall in the SEC with a 31-7 season record and a 7-2 mark in league games. LSU is coming off of its second consecutive sweep of a conference opponent last weekend, taking the series from Mississippi State to close out its eight-game home stand.

Since dropping two of three at Auburn to open league play back in early March, LSU has been on a tear winning 13 of its last 14 games coming into the showdown with Alabama this week, as the Tigers have climbed back up the national rankings to sit inside the top 10 for the first time since week three of the season at No. 7.

The Tigers have won those 13 games in a variety of ways, earning some blowout victories but also grinding out one-run victories six times during that stretch. It’s been a tough go for LSU’s opponents as well, as no opponent during that stretch has scored more than three runs in any single contest over that time.

Offensively, LSU is hitting .335 going into the final full month of the regular season, led by Bailey Landry’s .504 hitting clip and 62 total hits. Also making her way up hitting charts is Sahvanna Jaquish, who led the team in hits, RBIs and average last week, driving in eight RBIs in four games with a .455 hitting average which includes a double and her sixth home run of the season.

Featuring two pitchers with ERA’s under 1.00, the Tiger pitching staff has seemed to save its best for the stretch run as the group has a mark 1.46. Allie Walljasper and Carley Hoover are the two with identical ERA’s of 0.97, as Walljasper leads the group with 11 wins in the circle while Hoover has the most strikeouts with 113.

In the last two weeks, however, sophomore Sydney Smith has fired a pair of shutout victories to either clinch the series on the sweep, the first LSU player to do so since 2012. Each of those wins have not come easy, with LSU edging out 1-0 victories both times.

Alabama will come in licking their wounds after dropping two of three at Missouri last weekend, dropping a few spots to No. 12 in this week’s new NFCA poll. Still the Crimson Tide are only one place back of LSU in the SEC standings in fourth, as the recent series between the two have seen LSU hold a 6-4 advantage in the last 10 games, while holding an 11-9 edge going back over the last 20 games.

“I think it’s really tough. They all have their own niche. They are all different. They all have a completely different look. I think that’s huge and a big factor for their success.”

On what to expect from the series against Alabama…

“I’d like to say it comes down to one or two things but it never seems to work out the way you expect it to. But it could be one anything. Their strength is the same as ours right now. They really pitch well and they have the past few weeks. So I think one anything can decide these games, but it’s been that way for a lot of our games recently”

Comes into the series with a 33-6 overall record and an 8-4 record in the SEC… Is coming off of a win against Lipscomb Wednesday night in Florence, Ala… Last series was dropping two of three at Missouri last weekend… Is 22-1 at home in Tuscaloosa this season… Alabama head coach Patrick Murphy recently won his 1,000th career game… Team is batting .309 on the season with 300 total hits… Has 40 doubles, eight triples and 29 home runs… Has drawn 182 walks as a team this season… Has a team fielding percentage of .977… Leading hitter is Demi Turner with a .387 batting average and 43 hits, but was injured in the field during Missouri series… Has a team ERA of 1.55, earning 20 shutouts on the year… Sydney Littlejohn leads the team in ERA at 0.92, while Alexis Osorio is fourth in the country with 203 strikeouts and second in the country in strikeouts per seven innings at 12.8.

LSU remains on the road, traveling to Lake Charles to take on the McNeese State Cowgirls next Tuesday night at Cowgirl Diamond.