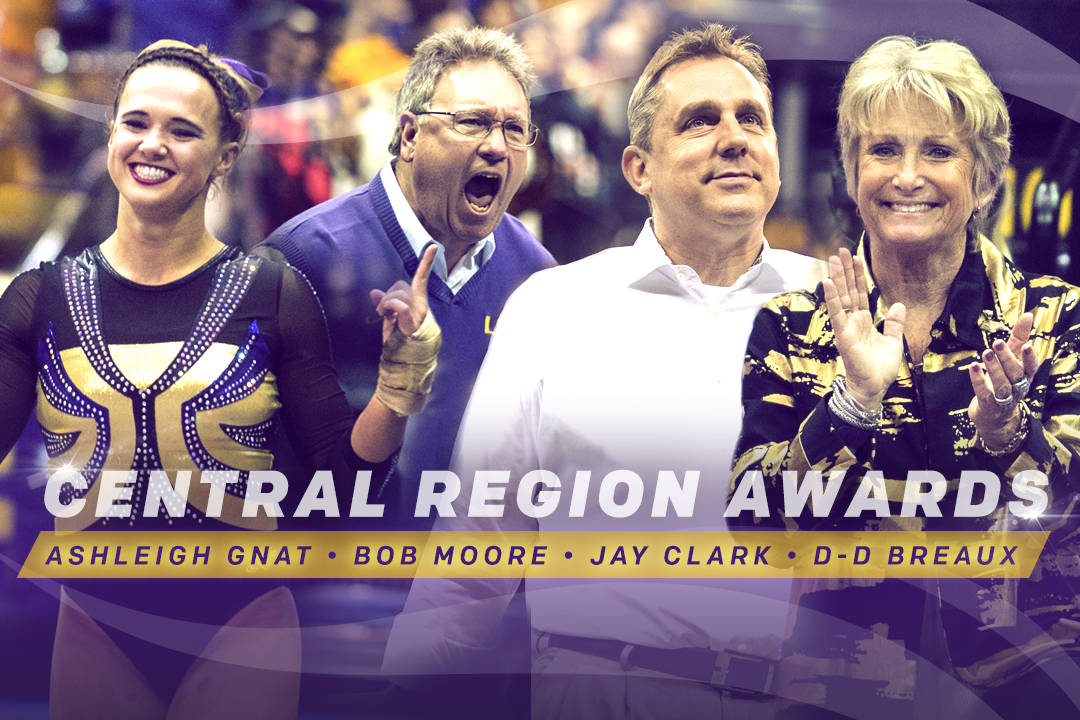 Gnat was named the Central Regional Gymnast of the Year for the second-straight season. The Lake Mary, Florida native ranked No. 1 on vault, No. 4 on beam and No. 8 on floor for three First Team All-America honors.

Gnat was named the Southeastern Conference Specialist of the Year for the second time in her career. The three-event specialist won the SEC vault, beam and floor exercise championship at the meet held in March. Gnat stuck her double-twisting Yurchenko in the anchor spot for a perfect 10.0 score. The 10 marked Gnat’s ninth of her career to tie Jenifer Wood for the most in school history.

Over the course of the season, Gnat has won 24 individual titles to push the total for her career to 64. With a 9.95 on floor at the NCAA Lincoln Regional, Gnat earned her 11th floor title of the season to set the new school record for most in a single season.

Breaux earned the Coach of the Year honors in the Central Region for the ninth time in her illustrious career. In her 40th season at the helm, Breaux has led the squad to a 25-1 record overall and a historic sweep of the Southeastern Conference regular season and tournament championships.

LSU has hit a 197 or better in every single meet this season, and the squad is on a streak of 21-striaght meets dating back to last season for a new school record. In 2017, Breaux has coached the squad to four scores that rank in the top-10 in school history. The Tigers’ 198.150 against Florida was the third-highest score in school history.

Moore and Clark were named Co-Assistant Coaches of the Year for the fourth time since the duo began working together in Baton Rouge. Moore has put together one of his most successful vault teams and one of the best in school history.

The lineup, which ranks No. 1 in the country, has totaled scores of 49.625, 49.600 and 49.575 in 2017. The three scores rank as the top three on vault in the country over the last two seasons. Moore’s vault team posted the highest score at an SEC Championship in school history and the 49.600 at Alabama was the highest against an SEC opponent on the road in school history.

Clark led the Tigers’ bar lineup to the No. 3 national ranking and No. 1 ranking in the Central Region. Clark worked with sophomore Lexie Priessman to the program’s first SEC Championship on bars since 1994. Four performers ranked in the top-10 of the Central Region in 2017 under Clark’s guidance.

No. 2 LSU qualified for the 2017 NCAA Championships in St. Louis, Missouri with a first-place finish at the NCAA Lincoln Regional. The Tigers will compete in Semifinal II at 7 p.m. CT on Friday, April 14. The meet will be televised live on ESPNU.

Fans may purchase general admission tickets through the LSU Ticket Office. Tickets are $51 plus a $5 processing fee and can be shipped via FedEx or held in will call for pick up in either Baton Rouge or St. Louis. Deadline to order for the NCAA Championships is 5 p.m. on Monday, April 3.

Gymnastics season ticket holders may purchase tickets by logging on to their account at LSUtix.net. All fans can order by calling the office at (225)578-2184 during our regular business hours.