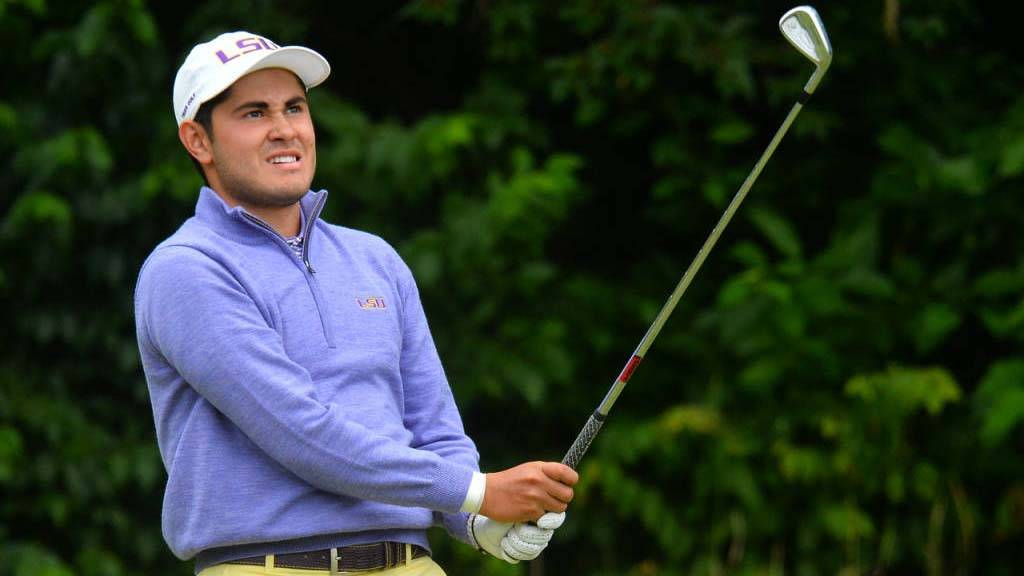 BATON ROUGE – The No. 5-ranked LSU Men’s Golf team looks to build momentum ahead of the championship season as it heads to Traditions Golf Club in Bryan, Texas, this weekend for the 2017 Aggie Invitational hosted by Texas A&M as each of the 13 teams in the field are set to play 36 holes in Saturday’s opener.

Tee times are scheduled to begin at 7:30 a.m. CT on both days of the tournament as two rounds of continuous play are set for Saturday with the final round following on Sunday to decide the championship. The course at Traditions Golf Club will play to a par 72 and 7,146 yards throughout the weekend.

LSU has enjoyed great success at the Aggie Invitational while appearing in each of the last four years as they tied Texas A&M for the team title in the spring of 2014 and earned a runner-up finish a year ago.

The Tigers have been steady during the spring as they have followed their victory at The Prestige at PGA West with back-to-back third-place finishes at the Louisiana Classics and General Hackler Championship and a tie for fourth place in their last tournament appearance at the Valspar Collegiate Invitational in Palm City, Florida, two weeks ago.

LSU in the Rankings

Their performance in recent weeks has seen the Tigers climb as high as No. 5 in the national rankings with the release of the latest Golfweek/Sagarin Performance Index on Monday. A consensus top-10 team this year, LSU is also the No. 7-ranked team in the newly-released Bushnell Golfweek Coaches Top 25 Poll released Friday and No. 8 in the latest Golfstat power rankings posted Tuesday.

A loaded field of 13 teams will greet the Tigers at the Aggie Invitational as the event features three top-five, four-top 10, six top-20 and nine top-50 teams in the latest Golfweek/Sagarin Performance Index.

The fifth-ranked Tigers will battle for its fourth tournament title for this season against No. 2 Baylor, No. 4 Oklahoma State, No. 9 Kent State, No. 11 Texas Tech, No. 16 Texas, No. 19 Texas A&M, No. 26 Arkansas, No. 32 North Carolina and No. 46 Michigan. Rounding out the field will be New Mexico State, North Texas and Texas-San Antonio.

Oklahoma State is back to defend its crown from a year ago when it posted a winning score of even-par 864 to finish two shots ahead of LSU at 2-over par 866 in a two-horse race for the title. Arkansas ended the event well back in third place a year ago with a final score of 11-over par 875.

Four past champions are in the field this weekend as Texas A&M and Oklahoma State have both won the Aggie Invitational three times while LSU and Texas Tech have each been crowned champion on one occasion.

The Tigers are paired with Baylor and Texas-San Antonio during Saturday’s opener as they will tee off in the second wave off the back nine beginning at 8 a.m. CT and play 36 holes together on the first day. Golfstat will provide live scoring of the tournament as fans can follow the Tigers in action at http://www.golfstat.com.

Head Coach Chuck Winstead will line up the same starting five for the third-straight tournament as seniors Brandon Pierce and Eric Ricard, sophomores Sam Burns and Luis Gagne and freshman Philip Barbaree will be in action once again this weekend.

Burns closed strong at the Valspar Collegiate Invitational two weeks ago to capture his 10th top-10 finish in 10 collegiate appearances this season as he fired back-to-back rounds of 2-under par 69 in the second and third rounds to tie for fourth place with an even-par score of 213 in the event. He is now the No. 2-ranked player in the country in both the Golfweek and Golfstat individual rankings.

Burns, who was recently named to Team USA’s Arnold Palmer Cup squad this summer, is a cumulative 60-under par in his 10 appearances this season and continues to lead the team with a 69.41 scoring average in 29 competitive rounds with 25 of his rounds being played at par or better. As a sophomore, Burns is on pace to demolish his 72.42 scoring average as a freshman in 2015-16 and Pierce’s single-season scoring record for the Tigers of 71.16 set during their the 2014-15 campaign.

Like Burns, Gagne is set to make his 11th appearance this season at the Aggie Invitational as he enters the weekend with a 71.31 scoring average and four top-10 finishes to his credit. The No. 43-ranked player nationally this season by Golfweek, Gagne is the top returning Tiger to the Aggie Invitational after tying for fourth place at 1-under par in the event a season ago.

Pierce is also ranked among the nation’s top players this season as he checks in at No. 53 in this week’s Golfweek rankings with a 71.60 scoring average and four top-10 finishes in seven starts on the year.

Barbaree has appeared in all four of LSU’s spring tournaments since joining the program in January as an early graduate from Shreveport’s C.E. Byrd High School. He owns a 72.82 stroke average in those four starts with a fifth-straight appearance on the cards this weekend. Ricard makes his 10th appearance of the season with a 72.88 scoring average and two Top 10s as a senior.

The Tigers will use their one-day, 36-hole Tiger Classic on Thursday, April 13, as a tune up for the 2017 SEC Men’s Golf Championships that return to Sea Island Golf Club’s Seaside Course in St. Simons Island, Georgia, on April 21-24. LSU will then play host to the NCAA Baton Rouge Regional at the University Club from May 15-17 with an eye on returning to the NCAA Championships once again.