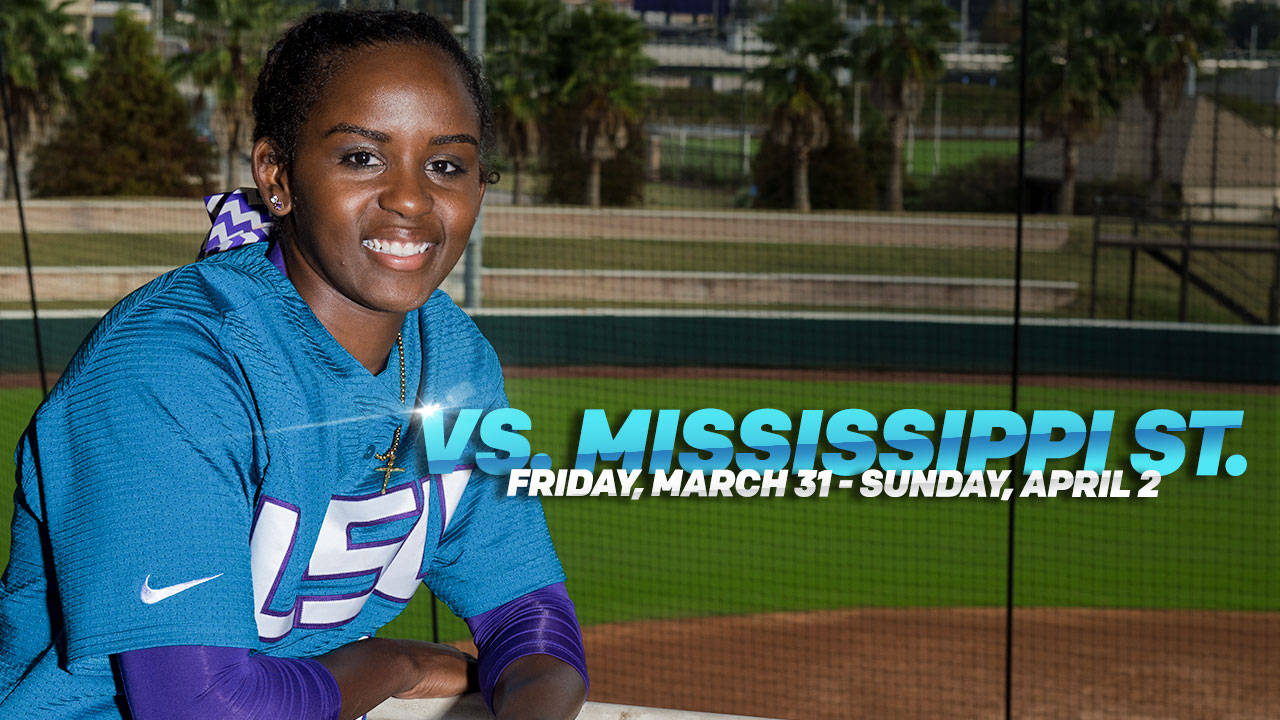 BATON ROUGE, La. – The No. 10 LSU softball team closes out its eight-game home stand this weekend, hosting the Mississippi State Bulldogs in a three-game SEC series this Friday-Sunday at Tiger Park in Baton Rouge.

All three games of the series will be streamed live online on SEC Network+, available through WatchESPN and the WatchESPN App with Lyn Rollins and Yvette Girouard. Patrick Wright will call all of the action on Talk 107.3 FM, with audio available for free at LSUsports.net/live.

The Tigers closes the month of March and opens April with one of its biggest weekends of the year as on Saturday LSU and Mississippi State will don teal uniforms and participate in the sixth “Strikeout Ovarian Cancer” game, which raises awareness for ovarian and other GYN cancers. Earlier that day on Saturday morning will be the fourth-annual Geaux Teal Ovarian Cancer Walk that begins and ends at Tiger Park.

LSU has never lost when wearing the Teal uniforms, moving to 5-0 after last year’s win over South Carolina in five innings. The Tigers will be looking to keep that momentum going with another conference series win after sweeping Georgia last weekend and winning their last six and seven-straight at Tiger Park, sitting at 28-7 on the season and 4-2 in the SEC.

Before going into the weekend the team earned a 9-1 win over the ULM Warhawks on Tuesday in Baton Rouge, plating nine runs on nine hits to win the game in five innings, earning the team’s 12th run-rule victory of the season in the process.

One of the big takeaways from the team’s performance over the last week has been the play of the defense that has not turned an error in the last four games and seven of the last nine overall. When LSU does not make an error in the field the Tigers are 19-1 on the season, as in those seven games their opponents have not scored more than three runs in those contests.

Although the series has relatively been a one-sided affair in LSU’s favor, Mississippi State comes into the series with a 26-9 overall record and 2-4 mark in SEC play. The Bulldogs have won their last three games and have a very solid RPI mark at 27.

LSU took the series against Mississippi State last season in Starkville, playing a total of seven games in the city in 2016 which included the team’s run to the SEC Softball Tournament final last May.

Sunday: Zoo Day, LSU Dads and Daughters; Petting Zoo prior to the game

Head Coach Beth Torina how happy she is having her mother Betty, an ovarian cancer survivor, be a part of this weekend and her life…

“I don’t know how I would make it through this job without her help. Just having her there, having somebody to talk to and be with, I can’t describe how important that is.”

“I love what it stands for. The first year I got here I didn’t know much about it, and actually being able to be a part of the event, hearing the stories and getting to know them and their families, it means a lot to me now. Every year has been even more special.”

“Mississippi State is a great opponent, everyone in the SEC is, but you definitely can’t overlook them this weekend. This event is just so special. We love playing at home and in Tiger Park and hopefully the weather will hold off for us.”

Comes into the game with 26-9 overall record and 2-4 record in SEC play… Has already matched their entire win total from the 2016 season… Won 16 straight games at one point during the season and comes into the weekend on a three-game winning streak… Hitting .294 at the plate with 275 total hits, of which 43 are doubles, eight are triples and 15 are home runs… Has been on the receiving end of 101 walks at the plate… Has stolen 50-of-60 bases this season… Reggie Harrison leads MSU at the plate with a .402 average and 39 total hits… Pitching staff has an ERA of 1.40, with seven shutouts and 209 strikeouts… Alexis Silkwood leads the staff with a 0.93 ERA and 10-2 record in the circle.

LSU opens a run of seven games on the road with a three-game series at Alabama next weekend in Tuscaloosa.