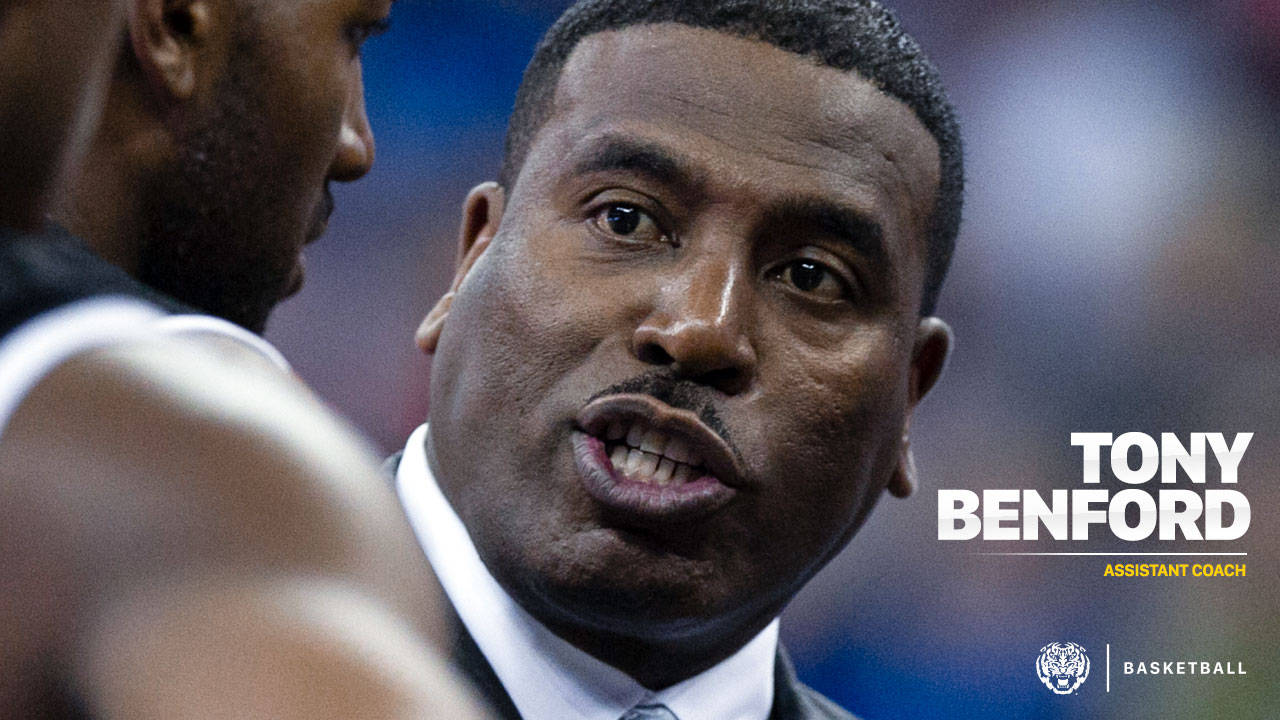 BATON ROUGE – LSU head men’s basketball coach Will Wade has named veteran coach Tony Benford as the first member of his coaching staff for the 2017-18 season.

Benford, who will serve as assistant coach, comes to LSU after five years as the head coach at the University of North Texas and a career of over 25 years in NCAA Division I basketball.

The hiring is subject to the usual background check and approval by the LSU Board of Supervisors.

“I am excited to have Tony Benford join our staff,” said Coach Wade. “Tony is the next step in our efforts to build a winning basketball program that all LSU fans can be proud of. His experience as both a head coach and long-time assistant on the recruiting trail will help us in our stated mission to recruit the best players that want to come to LSU and make LSU a consistent winner. Tony is also a fine on-court coach and his track record shows that he is able to develop players that can live out their dreams once they have finished at LSU.”

During that time, he was tabbed by Basketball Times, Fox Sports and Hoop Scoop as one of the country’s top assistant coaches in Division I basketball.

He has been part of teams that made 14 post-season appearances and has recruited and coached five NBA first-round draft picks: Ike Diogu from Garland, Texas (Arizona State, 2005); Charles Smith (New Mexico, 1997); Kenny Thomas (New Mexico, 1998); Lazar Hayward (Marquette, 2010); and, Jimmy Butler (Marquette, 2011). Six other players have been selected in the second round of the draft.

“First of all, I’m extremely excited to be a part of the basketball program at LSU,” said Benford. “I think Coach Wade is one of the best young coaches in the country and having the opportunity to work with him and restore the great tradition here at LSU is something I am really looking forward to. I feel like his style of play will be very attractive to recruits. I extremely excited to be a part of this great University and this great basketball program.”

In six seasons with New Mexico, Benford helped the Lobos reach five NCAA Tournaments while winning 73.2 percent of their games. New Mexico picked up a pair of Western Athletic Conference tournament titles in 1993 and 1996, and a regular season championship in 1994. During his stint with the Lobos, Benford coached the top four scorers in program history, including all-time leading scorer Kenny Thomas.

Benford assisted the Arizona State Sun Devils to four NCAA Tournament appearance during his tenure, including a second round appearance in 2003 and recruited Pac-10 Players of the Year Diogu and Eddie House (2000).

In two campaigns at Nebraska, the Cornhuskers won 37 games, highlighted by a trip to the NIT in 2008.

Benford helped Marquette, where he was associate head coach his last two seasons, to the NCAA Sweet 16 in both 2011 and 2012. He helped recruit six All-Big East players to Marquette, including 2012 conference player of the year Jae Crowder, a second-team AP All-American. The Golden Eagles won at least 20 games and reached the NCAA Tournament in each of his four years with the program.

In his five years at North Texas as the team transitioned from the Sun Belt Conference to Conference USA, Benford tried to mold his teams into hard-working defense units. In 2014-15, UNT held opponents to 68.2 points per game and just 42 percent from the floor, which ranked third and fifth in school history. In his third season at the Denton, Texas school, his team blocked 153 shots, a school record and the squad’s defensive field goal percentage inside the arc of 44.3 percent was the lowest in the Sun Belt.

Benford started his career coaching youth teams, including spending four years at All Saints School in Lubbock, Texas, where he served as head coach of the junior high squad.

A native of Hobbs, New Mexico, the 53-year-old played collegiately at Texas Tech and was the catalyst for the Red Raiders Southwest Conference regular-season and tournament titles in 1985, and their 1986 SWC Tournament championship. He earned All-SWC and SWC Tournament MVP honors as a senior. He was a fourth-round pick in the 1986 NBA Draft of the Boston Celtics and played professionally in Holland during the 1986-87.

He was a prep all-star, earning Converse All-America status and the New Mexico Player of the Year after pouring in 27.5 points per game as a senior for Hobbs High School. He led his team to the state title in his final season, earning MVP honors at the state championship tournament.