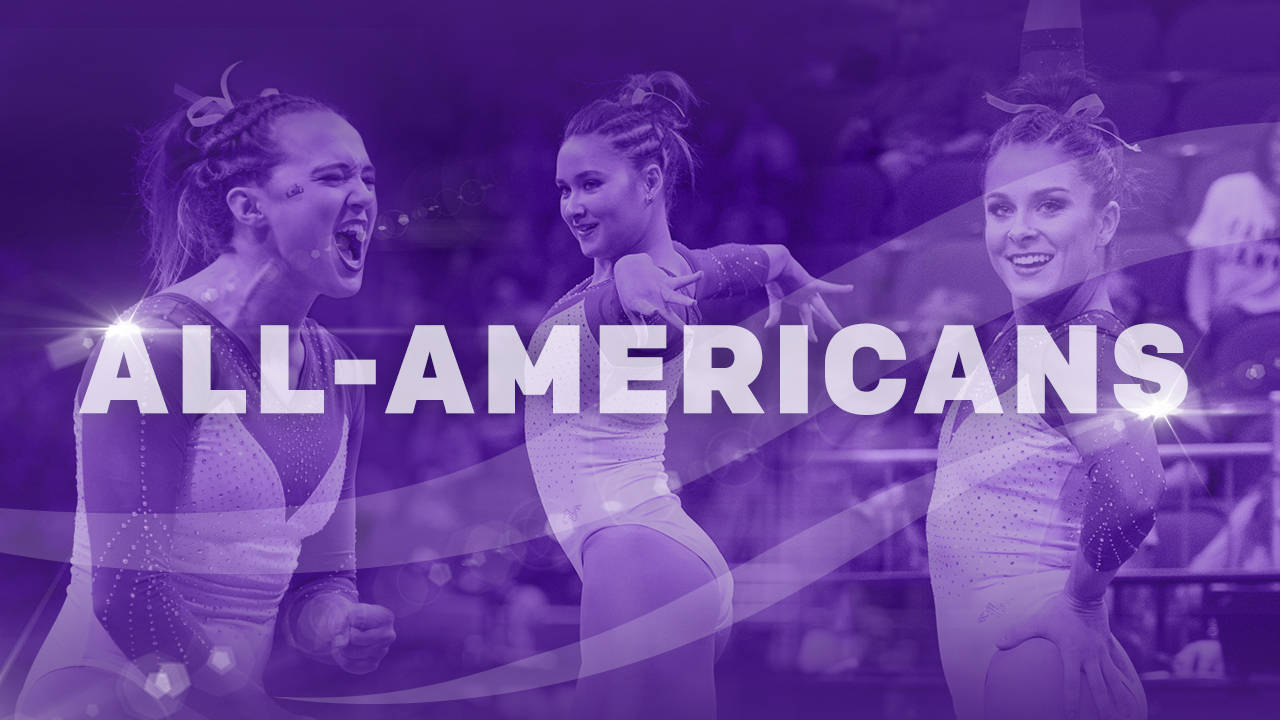 BATON ROUGE – Seven members of the second-ranked LSU gymnastics team totaled 11 National Association of Collegiate Gymnastics Coaches/Women (NACGC/W) Regular Season All-America honors after finishing in the top-16 of the event rankings based on RQS to set a new school record.

Senior Ashleigh Gnat earned the honors on all three events she competed on regularly in 2017. Gnat ended the season with the No. 1 ranking on vault, No. 4 on floor and No. 8 on beam. Gnat earned three perfect 10.0 scores on vault this season and has yet to score below a 9.90 on either vault or floor this season.

Kennedi Edney, Sydney Ewing, Sarah Finnegan, McKenna Kelley and Lexie Priessman also each earned honors. Ewing earned her fifth All-America honor after finishing 16th in the nation on vault. Ewing finished with an RQS of 9.900 and has gotten stronger throughout the season with a score of 9.90 or better on the event in five of the last six meets.

This also marked Finnegan’s second-straight year as a regular season All-American on beam. The sophomore has been a steady part of the bottom half of the Tigers’ lineup. Finnegan has tied her career high 9.95 on beam five times this season. Finnegan has also won six beam titles this season for the fifth-most in school history.

Priessman, an SEC champion on the uneven bars, earned the honors after finishing seventh with an RQS of 9.925. Priessman ended the season with an average of 9.90 and set a career high of 9.95 two times, including at SEC Championships as the anchor for the Tigers.

Kelley also earned All-America honors for the first time in her career. The sophomore and SEC floor exercise champion was a large part of the Tigers’ No. 2 ranking on floor this season. After returning from an injury in February, Kelley posted five scores of 9.90 or better along with a new career high of 9.975.

Edney had one of the best freshman campaigns in the league on the way to All-SEC freshman team honors. The California native finished No. 12 in the nation on vault with an RQS of 9.910. Edney had an outstanding first season on vault with a pair of 9.95s over the course of the season.

LSU gymnasts have now earned 42 regular season honors since the award’s inception in 2013. The 11 All-America honors pushed LSU’s total to 195 in program history.

No. 2 LSU (20-1) returns to action at the NCAA Lincoln Regional at 4 p.m. CT Saturday. The Tigers own the top seed with the two best teams advancing to the NCAA Championships. The squad is set to compete against Boise State, Nebraska, Arizona, Iowa State and Minnesota. The meet will be streamed live on Huskers.com.