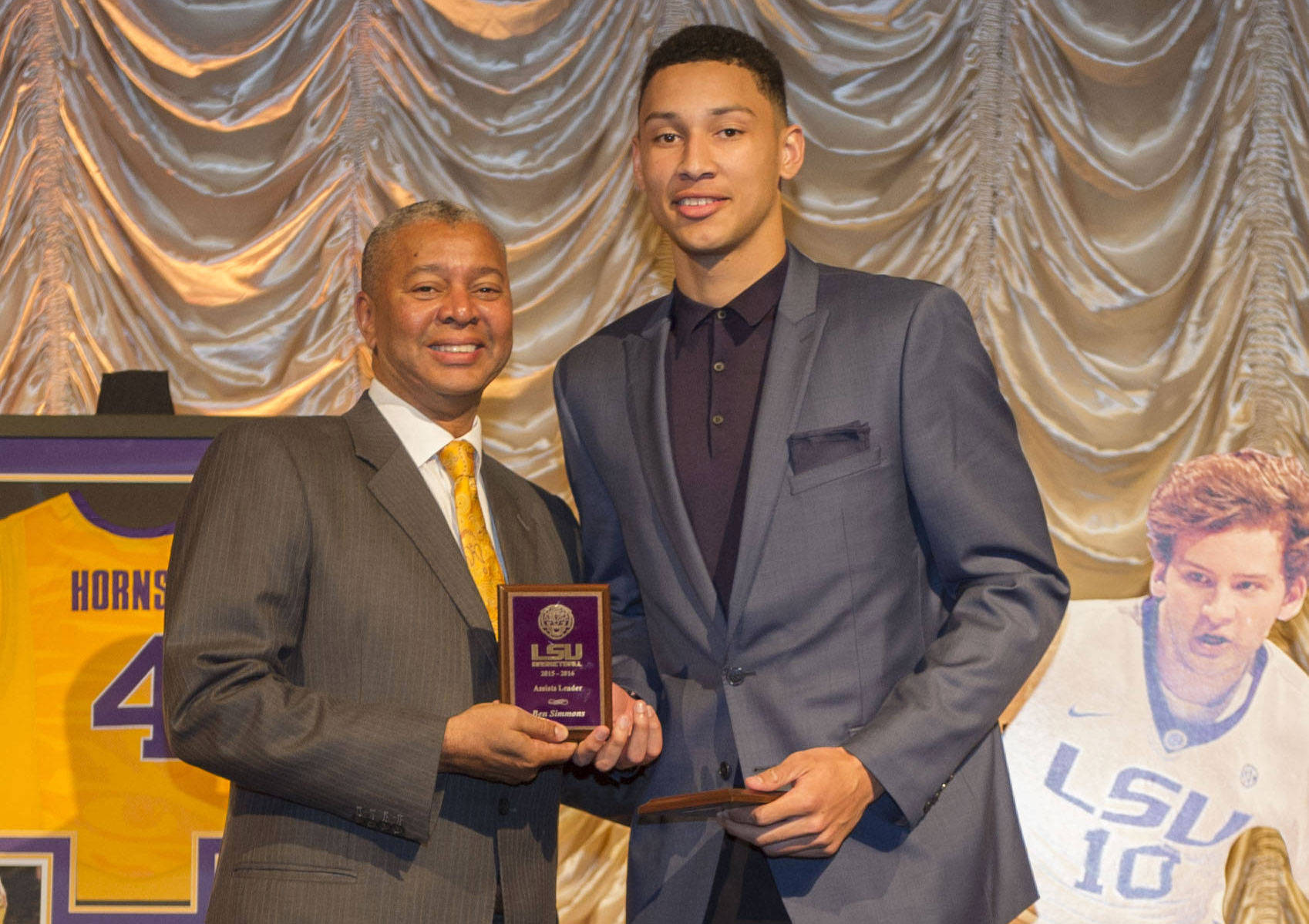 BATON ROUGE – For Ben Simmons, after the one-and-done of college basketball, the moment he has been thinking about for years is finally at hand.

The specially designed suit will be put on; he will gather with family and friends, including LSU head coach Johnny Jones at the Barclay’s Center in Brooklyn Thursday to await the start of the 7 p.m. CT 2016 NBA Draft.

He won’t wait long. After ESPN welcomes the television audience and sets the scene, NBA Commissioner Adam Silver will walk to the podium and say what everyone seems to know already that Ben Simmons of LSU will be the first pick in the draft to the Philadelphia 76ers.

He will be the second LSU men’s basketball player selected in the top spot joining a player who became one of the icons in the game – Shaquille O’Neal – who was chosen by the Orlando Magic with the first pick in the 1992 NBA Draft.

In all, Simmons is expected to be the eighth LSU player picked in a pro league at the number one spot (NFL, NBA, WNBA, MLB, NPF).

The native of Melbourne, Australia whose father David is from the Bronx and was a star in the Australian Basketball League, joined other draft prospects Wednesday for a pre-media draft availability.

Simmons has been coy about out right saying the 76ers will pick him, starting Tuesday night on “The Tonight Show” as Jimmy Fallon’s band “The Roots” gave Simmons a 76ers introduction as he came on stage. Earlier Wednesday with Andy Katz on ESPN, Simmons also took a “we’ll see” posture on what would happen Thursday night.

“We’ll see what happens (Thursday). I’m just blessed to be in this position. It’s been a long time coming. I’ve been working hard, and I’m ready,” he told the media on hand for NBA Draft Media Day Thursday in New York.

On what the team that picks him will get, he said: “Just a young, hungry competitor. I’m somebody who can push the ball in transition, point-forward style of play, being 6-10 and able to handle the ball.”

On being the face of a franchise and thoughts of going to Philadelphia: “It’s surreal, but I’m definitely looking forward to it. I feel like I’ve put in enough work to get to this point. I think everything else will take care of itself. There is a bunch of great people (in Philadelphia). Great owners, great players, young team. And, of course, a great coach in Brett Brown. It’s a team on the upward swing.”

The 76ers will make the first pick in the NBA Draft for the first time since choosing Allen Iverson with the top selection in 1996. Iverson, who will be enshrined (along with O’Neal) in the Naismith Basketball Hall of Fame in September, was named the 1996-97 NBA Rookie of the Year and the 2000-01 NBA MVP with Philadelphia.

It is possible time the first 14 picks are done that comprise the teams in the NBA Lottery that as many as nine freshmen could have been selected. That list includes the other most talked about player in the draft, Brandon Ingram of Duke, and Kentucky players Skal Labissiere and Jamal Murray.

There were a record 13 college freshman selected in last year’s draft, three more than the previous high of 10 in 2008.

While Philadelphia put itself in position for this chance to get LSU’s Simmons with their regular season record, the odds that the draft lottery would end up as it did wasn’t in their favor. Since the lottery moved to its present format in 1994, the team with or tied for the best odds has won just five of the 23 lotteries. But Philadelphia beat the odds both times it was in the position, this year and in 1996.

Simmons, who won the Wayman Tisdale Freshman of the Year Award to highlight a list of FOY awards, averaged 19.2 points, 11.8 rebounds, 4.79 assists and 1.97 steals per game. He was the first player to finish in the top five in the Southeastern Conference in points, rebounds and assists.

LSU’s ninth first team All-America had 23 double doubles with six games of 20 points, 15 rebounds and five assists. He posted 17 games of 20 or more points, making 56 percent of his field goal attempts. He made 199 free throws during the year, certainly the most for an LSU player in the shot clock era and only icons Bob Pettit and Pete Maravich made more free throws for the Tigers in a single season.

Tiger Tim Quarterman, who left LSU and signed with an agent after the season, is certainly hoping to hear his name called in the second round after working out for more than 15 teams in the recent weeks.

Quarterman played 99 games in his three years and in his sophomore and junior seasons he averaged 11.5 points in 2015 and 11.2 points in 2016. The Savannah, Georgia native finished his career 11th all-time in school history with 302 assists. He is one of just 25 LSU players to have recorded 100 steals in their LSU career.

This past year he ranked seventh in the SEC in assist-to-turnover ratio with a 2.3 mark based on 120 assists and 53 turnovers.

Draft coverage begins on ESPN at 6 p.m. CT from the Barclay’s Center and the first pick of the two-round draft will come shortly after 7 p.m. CT. Both rounds will be conducted Tuesday night.