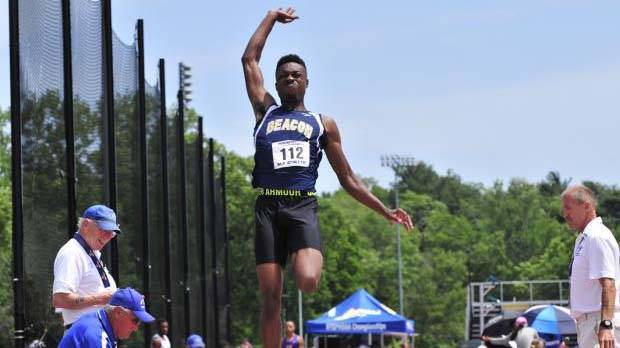 BATON ROUGE – LSU Track & Field’s heralded 2016 recruiting class is going out in style in its final season of high school competition with state titles won, state records falling and countless personal bests being set all across the country ahead of the USA Track & Field Junior Outdoor Championships beginning Friday in Clovis, California.

Future Tiger Rayvon Grey (Beacon, New York) was crowned a national champion in the long jump in Sunday’s finale at the New Balance Outdoor Nationals in Greensboro, North Carolina, just over a week after he took down Bob Beamon’s 51-year-old high school record in the state of New York in defending his state championship in the event.

Grey’s efforts this spring are among two medal-winning performances at the New Balance Outdoor Nationals this weekend and 12 state titles won by LSU’s recruits during the 2016 outdoor season.

This weekend provided a showcase for LSU’s recruits ahead of the USATF Junior Outdoor Championships as Grey was crowned the long jump champion at the New Balance Outdoor Nationals in Greensboro, while Hall won the 100-meter dash and Humphrey won the 100-meter hurdles in capturing event titles at the Brooks PR Invitational held in Renton, Washington.

Beamon, the 1968 Olympic Gold Medalist in Mexico City and former world-record holder in the long jump, set the previous New York high school record of 25-3 ½ more than a half century ago in 1965. Grey became the new prep record holder in New York while defending his Division I state championship when he jumped an outdoor personal best of 25-4 ¾ (+0.0) on June 10 ahead of the New Balance Outdoor Nationals.

A senior at Warner Robins High School, Hall took home the 100-meter title at the Brooks PR Invitational with a wind-legal personal best of 11.39 to become the No. 4-ranked sprinter nationwide in the 2016 season.

Hall’s prep career is highlighted by seven Class 5A state titles as one of Georgia’s most decorated athletes in the Class of 2016, including a third-straight state-championship sweep of 100-meter and 200-meter titles as a senior this spring. She also ran a career-best wind-aided time of 11.37 (+2.8) in the 100 meters at the state sectionals to book her return trip to the Georgia Class 5A state meet in the event.

Humphrey, who hails from Hoover High School, has proven herself as one of the elite dual hurdlers in the high school ranks throughout the 2016 season after having personal bests of 13.24 (+0.9) in the 100 hurdles and 41.62 in the 300-meter hurdles in a sweep of high school event titles at the Mt. Sac Relays back in April. Those times rank No. 7 and No. 9, respectively, on the U.S. high school list this outdoor season.

Before winning the Brooks PR Invitational title in the 100 hurdles this weekend, Humphrey swept Alabama state titles in the hurdles for the fourth-straight year with meet-record times of 13.49 and 42.46 in Class 7A.

Joining Grey with a medal-winning performance at the New Balance Outdoor Nationals was Dunbar, who scored the meet’s shot put silver medal for the second-straight season with a series-best mark of 51-2 ¼ during the competition. Dunbar is the No. 3-ranked shot putter at the high school level this season with an outdoor personal best of 52-7 ¾ set at the Morris Country Championships.

Perhaps no LSU recruit has rewritten the record books this season quite like Marshall this season as the nation’s top sprint hurdle recruit in the Class of 2016. Shortly after smashing the national high school record in the 60-meter hurdles with a winning 8.02 in the final at the New Balance Indoor Nationals, Marshall hurdled a wind-legal PR of 13.04 (+1.2) to set the Texas Relays high school mark in defending her title in the 100 hurdles in early April. That time ranks the Arlington Seguin High School product as the No. 2-ranked hurdler on the U.S. high school list in 2016.

Tonea Marshall wins vote for Most Outstanding Performer HS after US#4 ALL-TIME 13.04 in the 100mH! #TXRelays16 🚧🏃🏽💨🔥 pic.twitter.com/fJYjd6gcSS

Marshall was also crowned the Texas Class 5A state champion for the second-straight season with a title-winning time of 13.30 (+0.5) in the state final before placing fifth at the New Balance Outdoor Nationals.

Stauber has also been crowned a state champion for the second year running while defending Minnesota’s Class 2A title in the 800 meters with a winning run of 2 minutes, 7.38 seconds in the 2016 state final. She then dropped her seasonal best to 2:07.33 in a bronze-medal-winning third-place finish at the Brooks PR Invitational to rank No. 5 on the U.S. list among runners in the Class of 2016.

Congratulations to Ruby Stauber for her 2nd State Championship in the 800m! pic.twitter.com/ebbuTT68qm

Harrell and Miller have already arrived on LSU’s campus for summer school after wrapping up their senior seasons with state-title-winning performances back in May. Harrell, who cleared a personal-best mark of 7-2 in the high jump to rank No. 2 nationally as a junior in 2015, won his fourth-straight state high jump title for Tylertown (Miss.) High School in 2016. Miller swept Louisiana’s Class 4A state titles in the long and triple jumps as a senior with marks of 23-3 ¼ (+1.7) and 51-0 (+2.7) at his future home at the Bernie Moore Track Stadium.